SEG Automotive, a Novi-based automotive starter, electrification, and generator supplier that was spun off from German conglomerate Bosch in late 2017, is betting that the industry will produce more hybrid-electric than full-electric vehicles by 2025. As a result, it’s investing heavily in its new 48-volt starter generator that it calls a boost recuperation machine, or BRM.

A 48-volt BRM would replace the standard 12-volt alternator in vehicles, and requires only a minor, low-cost modification of the powertrain. It enables hybrid functions such as brake energy recovery (recuperation), electrical torque support, load point optimization, and smooth start/stop engine starts. The increased electrical power enables the use of power-hungry features as well as more safety features. It also reduces CO2 emissions, according to SEG.

“As you put more screens and electronics into vehicles, there’s a greater pull on the electrical load,” says Jon Husby, president and CEO of SEG Automotive North America. “Because of that, we’ve had to step up our game on output. When you talk about the demand and the electrical load, and people who want to move into hybrids, trucks, and SUVs, moving from 12-volt to 48-volt helps with that.” 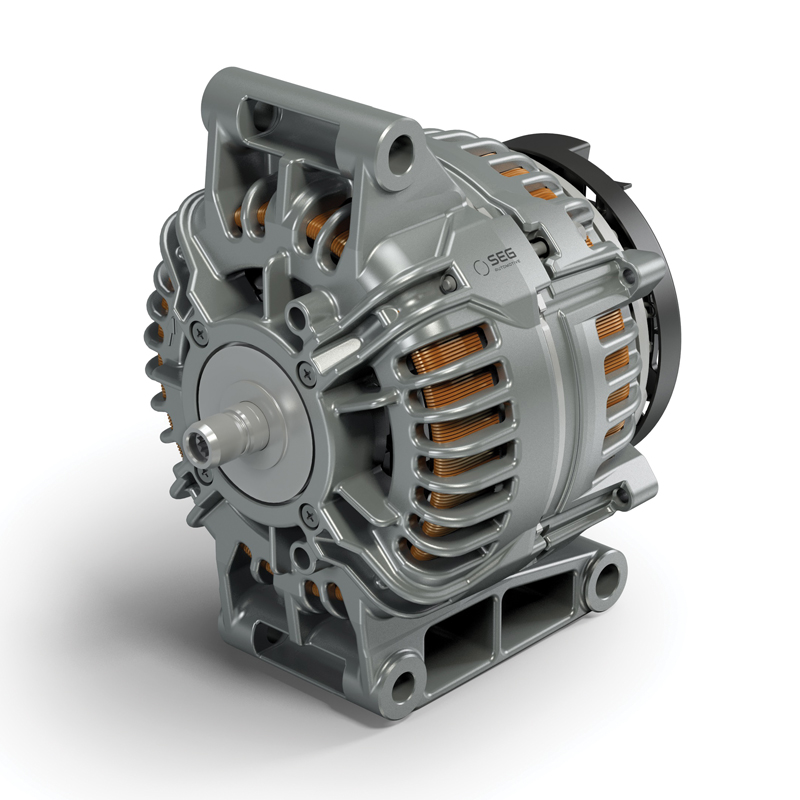 The SEG Automotive BRM produces 250 amps, compared to the 130 amps of a 12-volt alternator. In addition to the added electrical output, perhaps the most obvious benefit to drivers is the smooth start/stop function of the BRM. Many vehicles today, in an effort to save fuel, automatically shut down their engines when stopped for a certain length of time, like at a stop light. The engine starts again when the driver hits the accelerator. Sometimes, however, there’s a lag as the engine restarts. The 29-percent improvement in torque capacity of the BRM ensures an almost immediate engine start.

“We’ve worked hard on making start/stop seamless,” Husby says. “A lot of OEMs make us do 300,000 cycles in testing and validation.”

SEG has sold more than 40 million other start/stop products globally. The 48-volt BRM, however, is the future. It’s currently manufactured in China and Spain, and is in production on a niche Daimler vehicle and another dozen or so vehicles worldwide.

As you put more screens and electronics into vehicles there’s a greater pull on the electrical load. Because of that, we’ve had to step up our game on output. … moving from 12-volt to 48-volt helps with that. — Jon Husby, president and CEO, SEG Automotive North America

The world market for 48-volt generators is currently 642,828 units, but demand is expected to reach 5.6 million units by 2021. SEG Automotive says it expects its “significant” share of that business to increase by 124 percent between now and 2021.

“The other piece of the puzzle is making the alternators more efficient, improving fuel economy, and reducing CO2 emissions,” Husby says. “The proof of concept is the FEV A48V Demonstrator we did with (development service supplier) FEV North America Inc. in Auburn Hills.”

The Demonstrator is a Mercedes AMG equipped with an SEG Automotive 48-volt BRM and other advanced equipment.

The BRM helps increase efficiency when the Demonstrator is braking by recovering and storing part of the kinetic energy in the battery. The coasting function opens up further potential; during the coasting phases, the combustion engine is decoupled from the transmission and switched off.

As a result, the vehicle can maintain kinetic energy and coast for longer distances by avoiding friction losses of the combustion engine. When the driver wants to accelerate, the combustion engine is smoothly and immediately restarted and re-engaged into the powertrain. In real operation, the BRM saves up to 15 percent when it comes to fuel — and, to the same degree, CO2 emissions, according to SEG.

“It’s resulting in a more pleasurable drive and faster boost,” Husby says. “It’s proof that there’s value in moving from 12-volt to 48-volt.”

The coasting function was further optimized on the Demonstrator by a predictive recuperation function, jointly developed by FEV, SEG, and Aachen University in Germany.

A camera-based sensor system detects the vehicles that are traveling ahead of the Demonstrator. As the driver takes his or her foot off the accelerator, a prediction algorithm calculates whether it makes sense to switch into coasting mode or whether deceleration is necessary in order to avoid tailgating.

The BRM automatically regulates the degree of acceleration so the mechanical brake system isn’t required. “It’s fun to look at what else can be done around this technology,” Husby says.

The current BRM is belt-driven, and therefore located toward the front of the vehicle.

“Everyone in the industry is trying to figure out how to move it back in the vehicle,” he says. “If you can put it into the gearbox, you add efficiency. That’s the best cost-to-benefit ratio. The farther back you go, the higher the cost of implementation.”

Although SEG firmly believes that its 48-volt BRM and hybrid-electric technology is the long-term solution for the transit industry, it also has a keen eye on the future of electrification. “We’re investing tens of millions of Euros in a technical center in China, the hottest market for electrification,” Husby says.