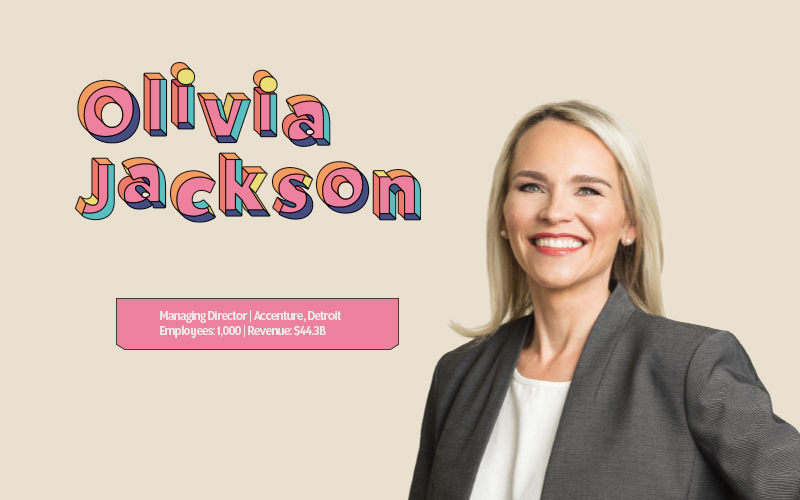 Before graduating from William and Mary in 1998 with degrees in international relations and economics, Olivia Jackson had dreamed of becoming a diplomat or a lawyer.

The Virginia native’s plans changed after attending a career fair where she met representatives from Andersen Consulting. She was subsequently hired by the firm that would later become Accenture, a leading Fortune Global 500 company that provides management consulting, technology, services, and outsourcing worldwide.

“My intention was to work at the company for two years and then maybe go to law school, but here I am 23 years later and I couldn’t be happier with the work I do,” says Jackson, who serves as a managing director at the Detroit office. “I’m a people person. I like to solve problems, I love technology because it’s always changing, and I love to learn.”

Her climb up the corporate ladder at Accenture began with a stint as an analyst based in Washington, D.C., where she helped implement a large inventory system for field offices at a federal agency. She then became a consultant and was assigned to a government project that included the testing of various website designs. Following the 9/11 attack, Jackson was promoted to manager, with the assignment of deploying more accurate fingerprint-matching technology for a federal security agency.

Twelve years ago, when Jackson was transferred to Detroit as a senior manager assigned to a local banking client, she began to raise a family of three boys with her husband — and faced the biggest challenges of her life.

“Our first son is a special needs child and our second son was diagnosed with cancer, so we had a lot of life thrown at us,” says Jackson, who adds that she’s grateful that she works for a progressive company that allowed her to work part time for eight years until her home situation was stabilized. 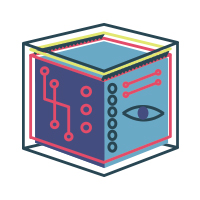 “I was inspired by a co-worker who previously had asked and was allowed to work part time, which was very unusual back then,” Jackson says. “I learned to speak up and not be afraid to ask for what I needed. During that difficult time, Sheryl Sandberg’s book, ‘Lean In,’ was helpful. I realized that I didn’t have to opt out and quit my job. It doesn’t have to be either I’m a partner or I stay home with the kids, because life is a journey and there are so many options in between.”

Three years ago, Jackson returned to work full time and, within a year, was promoted to her current position as a managing director at Accenture’s Detroit office. She’s also the inclusion and diversity lead for her technology group, and it’s a role that she relishes.

“When we lift others, we all get lifted, and I think it’s important to have people
who don’t think like us and have different perspectives and life experiences,” says Jackson, who this
past year has been conducting unconscious bias training, and participated in inclusion and diversity recruiting events with university students as part of Accenture’s recruitment initiatives.

Jackson also leads an effort to ensure that mentorships are implemented as part of Accenture’s corporate culture. “I feel very strongly about the need to have a support system so people can help and advocate for you, because I’ve been the grateful recipient of those kinds of allies and advocates,” she says. “We spend a lot of time on making sure we’re inclusive in who we’re mentoring and that it’s not just people who are like us, but everyone.”

As a working mother and corporate executive, Jackson has clearly demonstrated that a female can climb the corporate ladder while holding both roles.

“I think generally, in this country, there’s been a lot of progress in women being able to move up into top executive positions, but we still have a long way to go,” acknowledges Jackson, who works for a company committed to ensuring there’s greater gender equality in executive positions.

“As part of my higher purpose as a professional female, I encourage women to speak up, ask for support, be yourself, and make your own story. Find a place to work where you do what you love and can truly bring your best self to work every day. I’m so fortunate to have found a place like that for me at Accenture.”