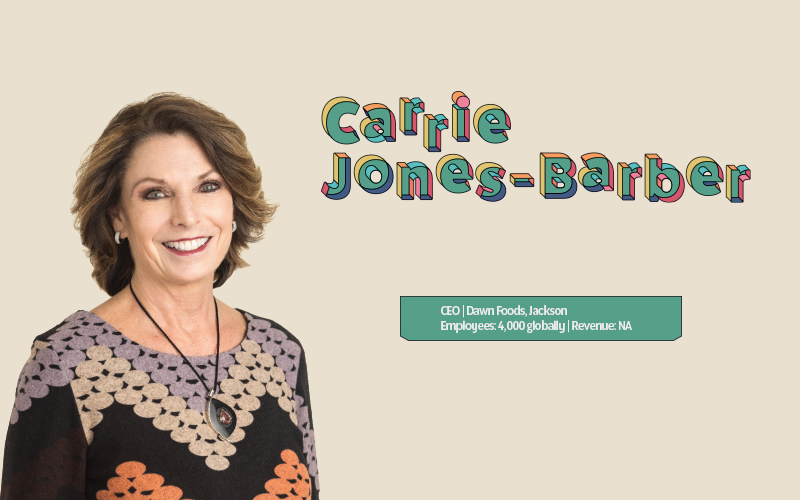 Carrie Jones-Barber knew at a young age that she wanted to follow in her father’s, uncle’s, and grandfather’s footsteps at bakery supplier Dawn Foods in Jackson.

“There was one particular triggering event,” Jones-Barber recalls. “I was 12 years old, and I answered the phone late at night and a baker needed … my dad to help him with a problem. The next day, I decided I wanted to do what my dad did — solve people’s problems.”

From a donut mix with a 100-year-old secret blend of ingredients to gourmet chocolate, ready-to-serve cakes, and frozen muffins, Dawn Foods supplies a complete line of mixes, bases, icings, glazes, fillings, frozen dough, and fully baked products and equipment to food industry customers across the globe.

“I started working here part time when I was in high school,” Jones-Barber says. “I started
in the lab, washing pots and pans. Even earlier than that, I got to know the business by going to trade shows with my grandfather and dad. That’s what propelled me to know that’s what I wanted to do
with my career.”

After graduating from Western Michigan University with a bachelor’s degree in business administration and then obtaining a master’s degree in management from Northwestern University, she started her career in medical sales. Ultimately, however, she decided to return to the family business. She joined the sales team in 1985, became chief information officer in 1997, and took over as president of Dawn Foods International, which is based in the Netherlands, in 2002.

“When I came back to work sales for Dawn, there were no women in bakery sales,” Jones-Barber says. “I would walk into the back of a bakery and they would look at me and go, ‘What are you doing, and why are you here?’ What I learned is that I had to really know my products.” 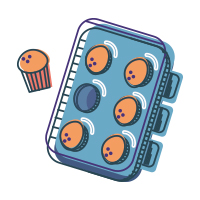 Even today, she says, the baking industry is pretty much a man’s world, and people often will start talking business to a man she’s standing next to rather than her.

“It’s changing pretty rapidly,” Jones-Barber quickly adds, explaining that she’s part of the Society of Bakery Women, which is trying to get more women into the culinary space via internships and other avenues.

At home in Ann Arbor, meanwhile, she’s striving to continue the company’s growth and work culture, which she says is the envy of the baking industry.

“Growth has always been really important to me, as well as innovation,” she says. “We haven’t done as good a job as we can in telling people about the areas in which we’re being innovative.”

To change that message and transform its organization, Dawn Foods is focusing on e-commerce and digital communications. “Our customers spend time on our website getting ideas for their own bakeries,” she says.

According to Jones-Barber, the workplace culture at Dawn Foods is a differentiator between the company and its competitors.

“I want to continue to make Dawn the great place to work that it has always been — and that means I have to be able to attract the best people and give them the opportunities to develop, focusing on diversity and inclusion,” she says. “We work in a bakery. We bring fun moments into people’s lives. I really want to make sure we’re laughing and enjoying and recognizing that we make great treats for people to enjoy every day, or (for) great celebrations.

“Without question, we believe we have a unique culture. It involves the circle of excellence that includes people, product, and customers. We get the best people. We keep the best people. We make sure they have great career opportunities and choices.”

Dawn Foods was founded in 1920. Jones-Barber’s grandfather, E. Marlin Jones, worked as a bookkeeper for the company and bought out the founders in 1955. Her father, Ron Jones, and uncles, joined their father in the company in the 1960s. Jones-
Barber took the reins in 2006.

Jones-Barber says her father and uncle are still active in the company. “How lucky am I that I have the same mentors I’ve had since joining the company? That’s a luxury a lot of people don’t have, and I don’t forget it.”