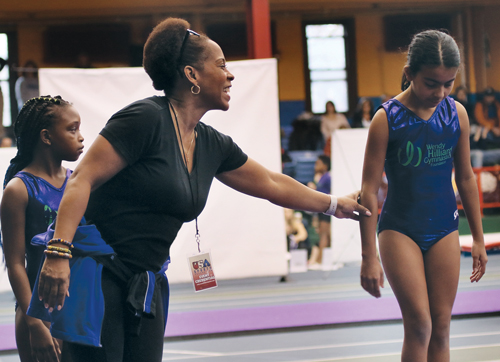 Since Wendy Hilliard launched her eponymous foundation in 1996, more than 17,000 kids have benefited from gymnastics, tumbling, and trampoline classes at New York City’s Harlem Children’s Zone and the Joe Dumars Fieldhouse in Detroit. All of the classes are low-cost and, in some cases, even free for participants. And for good reason: As the first African American to represent the United States in the discipline of rhythmic gymnastics, Hilliard’s motivation for the foundation was triggered by her concern about the lack of minorities coming into the sport she loved.

“I wanted to go back to the grassroots,” she says. For Hilliard, that meant the late 1960s in her native Detroit.

“My mom was an administrator in the education department,” she recalls, “and my father ran methadone clinics for the city. Running those clinics was crazy at that time. There were a lot of drugs in the city. Both my parents had master’s degrees, so they were very active and supportive, and really stressed (the importance of) education and hard work.

“When I was 9 or so,” Hilliard continues, “we moved to the University District on Fairfield Street between Curtis and Thatcher streets. I was on the Ferndale swim team, and I also started tumbling at the Fisher YMCA.”

Before long, Hilliard wanted to do more than just tumble.

“So I had to go out to the suburbs,” she says, “to the Southfield Jewish Community Center, to take more artistic gymnastics — which was the bar and the beams. They didn’t have any of that in the city.”

Enter Zinaida and Vladimir Mironov, a couple from Ukraine who were coaching gymnastics at the community center. “Zina was a specialist in rhythmic gymnastics,” Hilliard says. “She was my main coach and she was a great visionary. She fine-tuned and switched me from artistic gymnastics to rhythmic gymnastics.”

Rhythmic gymnastics is for women only, and features performing on the floor with a ribbon, ball, hoop, clubs, or rope, either individually or as a group.

Hilliard, her coaches, and a group of aspiring gymnasts were soon back in the city as part of a team called Detroit Metro Gymnasts, which operated out of several venues, including the legendary Kronk Recreation Center on the west side.

“When we were at Kronk,” Hilliard recalls, “the boxers were downstairs with (trainer) Emanuel Steward, doing their stuff, and we were upstairs. Our team was based on kids who really wanted to do gymnastics, but the training didn’t cost a lot. Our parents all got together and helped us raise money for travel — and, surprisingly, a lot of the kids from the suburbs started coming to us because we had the best coaches and the best team. It was a very interesting combination of Detroiters and suburbanites.” 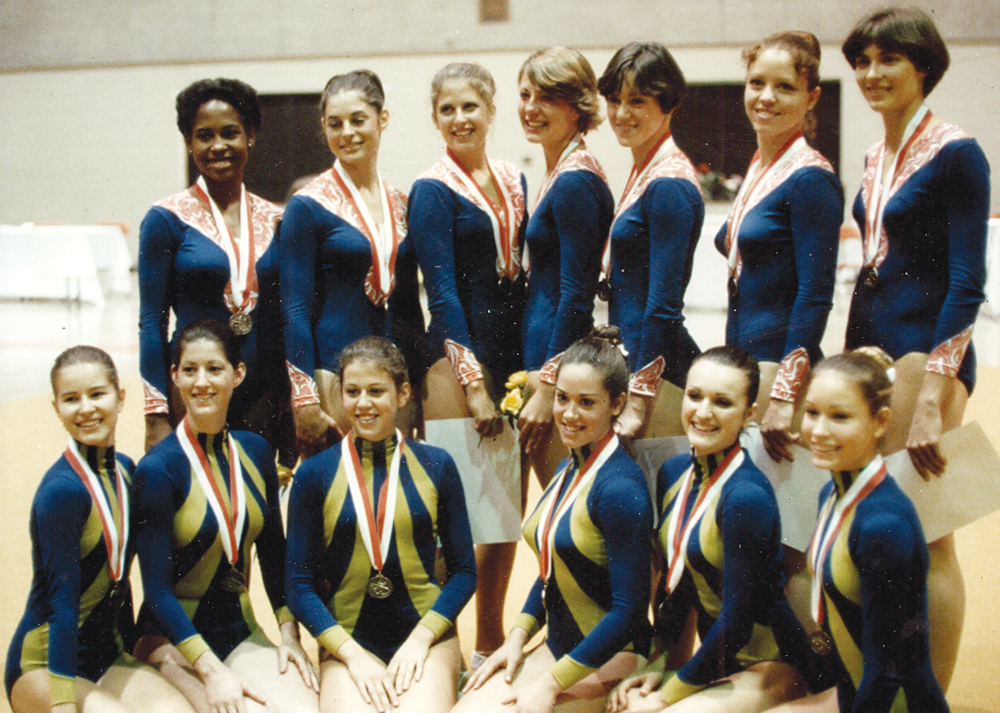 It was a talented group, too.

“There were two top rhythmic gymnastics teams in the country at that time, Detroit and L.A.,” Hilliard says. “Rhythmic gymnastics became an Olympic sport in 1984, so in the late ’70s and early ’80s, they were recruiting a lot of gymnasts to start this new sport.”

Hilliard was a naturally gifted performer. “I was the first black to make the national team in 1979,” she says, proudly, “and by 1983 I was 22 and training for the world championships.”

With the debut of rhythmic gymnastics at the Olympics only a year away, Hilliard was one of a dozen of the USA’s top gymnasts who convened for six weeks of fine-tuning at the Olympic Training Center in Colorado Springs.

“I’d been on the national team about four years, and already competed in two world championships,” she says. “They brought us together to tell us … the girls that were going to go to the Olympic championships, and they read off everybody’s name.”

That’s when Hilliard got the first of two unwelcome surprises. “They didn’t read my name,” she recalls, “and everybody was like, wow, shocked. There was a coach from L.A. who made the decision.” 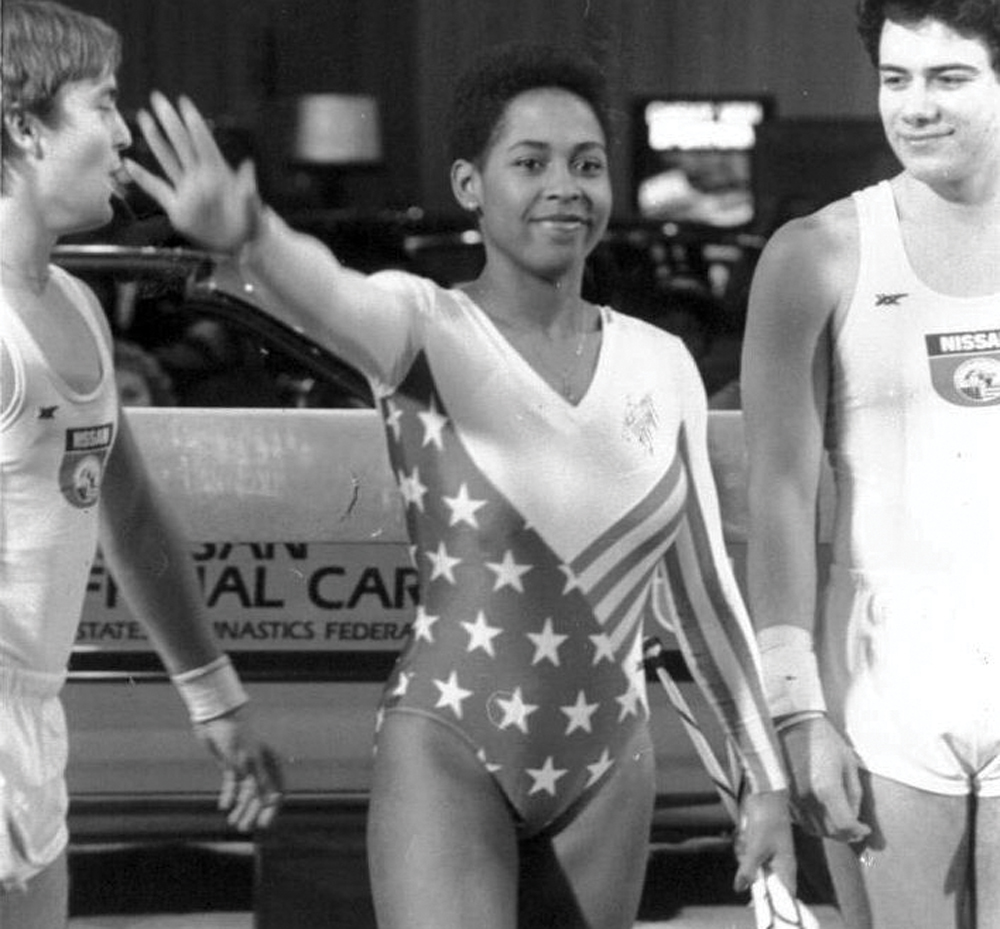 That was Alla Svirsky, who’d been designated as the head coach of the women’s Olympic Rhythmic Gymnastics Team for the 1984 games. Hilliard promptly asked Svirsky why she’d been excluded from the team — which is when she got her second, even more devastating, surprise.

“She said, ‘Vendy,’ ” Hilliard recalls, imitating Svirsky’s Russian accent, ‘“vhat are we going to do vith you? You stick out too much.’” Hilliard pauses, the memory of this long-ago encounter obviously still wrenching.

“I was really upset,” she finally says. “I’d known Alla for a long time. A lot of it had to do with us being an emerging team, and the best teams in the world were Eastern European. In the fight to look more like them, I didn’t fit the mold of looking like a rhythmic gymnast, period. But I was kinda shocked that in 1983 you could say that.”

USA Gymnastics ultimately overruled Svirsky’s decision, and Hilliard’s position with the team’s top six competitors was restored for the world championships. But in the process, she learned a difficult and life-changing lesson.

“It did shape me,” she says. “I realized I had to fight for my sport. I had to become an advocate for it and for myself. Within a few years, my teammates noticed I had this power to fight for them. So they voted me in as their athlete rep.”

Hilliard performed on the Rhythmic Gymnastics National Team a record-setting nine times, serving twice as the national team captain and competing in three world championships as well as the 1984 Olympic Trials. In the end, she wasn’t one of the two athletes chosen to compete in that year’s games.

“But I have no regrets,” she says. “I competed at the highest level.”

Throughout her career, Hilliard not only trained up to six hours a day, but also was a full-time student — first at Coffee Middle School, then Cass Technical High School, and by the early 1980s, at Wayne State University.

“It took me a long time to finish college,” Hilliard says. “I went to Wayne State for about two-and-a-half years and I was studying physical education and Russian, but I was still training and competing. I’d take a semester off and go train in Bulgaria or someplace.”

“Half of moving was because I really love New York,” she says, “but I also wanted to finish my career here. A lot of gymnasts come here to do Broadway, and I did a lot of performing — so there was also that element of being able to use my skills. I finally did get my college degree at NYU.”

Hilliard’s career as a competitive gymnast ended in 1988, but she quickly segued into a successful second career as a coach of her sport’s elite athletes. She also served four times as coach of the USA National Team. “I loved it,” she says, “but if you’re a high-level coach, you’re in the gym as much as the gymnasts are.”

She also served as the first African-American president of the Women’s Sports Foundation. “That really taught me a lot about advocacy,” Hilliard says. “This was the Title IX fight. Women’s sports were becoming really strong and I had been an advocate for years, so I was kind of at the forefront of this journey of representing athletes in sport — the right to compete and to protect athletes’ rights. That’s where I got a lot of my strength from.”

In 1996, Hilliard made a tough decision that ended her career as a coach. “After training six hours a day for 10 years,” she says, “I was doing it again for another five years as a coach.”

Her role at the Women’s Sports Foundation seamlessly led to another opportunity. “I was learning a lot about raising money and providing access for sports,” she says, “and that’s what inspired me to start my foundation.”

Over the years, the Wendy Hilliard Foundation has more than lived up to its stated goal of “improving the health and lives of underserved youth through the sport and community of gymnastics.” In 2016, Hilliard opened the doors of a branch of the foundation in her hometown, at the Joe Dumars Fieldhouse at the former Michigan State Fairgrounds.

“Building a big, beautiful sports arena downtown is great,” says Hilliard, “but it’s not serving the kids that are there. The strength of Detroit comes from the neighborhoods. A lot is done downtown and Midtown, but people are living in the neighborhoods. So I asked, what are you all doing for the kids?” 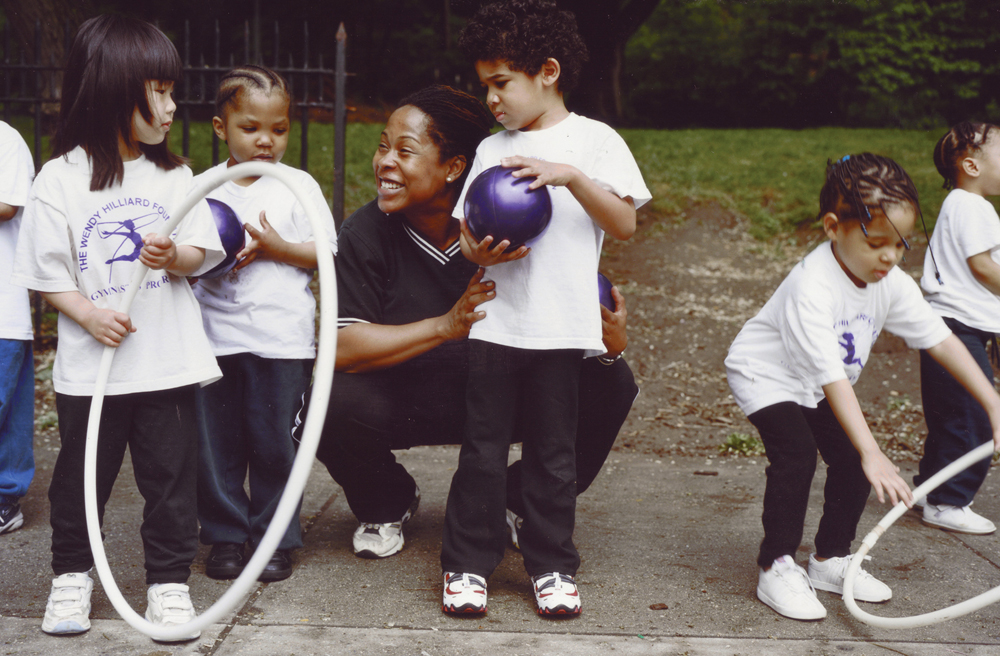 Hilliard’s Detroit program goes a long way toward answering that question. “We have about 60 kids already,” she says. “I didn’t do any promotion. It was all word of mouth, because I wanted to make sure the program was strong enough. Little by little, we’re expanding beyond that, but it takes a while to get your groove.”

“I’m a big advocate not just for gymnastics, but all youth sports, and that’s what gave me the thought to bring it back to Detroit,” Hilliard says. “There’s something about that hunger in Detroit that’s really gratifying. And the kids that came to us are so talented. They love the discipline of gymnastics. There’s only one way to do it; you gotta keep working it. You have to be focused.”

After living more than 30 years in Manhattan, Hilliard, married and with two teenage sons, is a proud New Yorker, but her Michigan roots run deep. Her 94-year-old mother and her sister live in Detroit, and the family still owns their home on Fairfield.

“It’s always great to go back to Detroit,” Hilliard says. “The energy is really wonderful. Everyone is pulling for the city to come back. There are a lot of Detroiters here in New York, and when we see each other it’s all about Detroit. It’s in our blood.”