Since arriving in Detroit in 1833, the extended Buhl family has had its hands in nearly every facet of business and local politics — both Frederick and Christian Buhl served as mayor at different times during the mid-1800s, and past mercantile interests have included furs, iron works, banking, hardware, railroads, construction (the historic Buhl Building), aircraft, and more. Now add racing to the list.

As the first professional race team established in Detroit, Robbie and Tom Buhl are showcasing the city through an array of channels, including entry in Americas Rallycross Championship (ARX) with driver Alex Keyes and a racing version of a Ford Focus. The circuit features short races where fans have prime views of asphalt and dirt tracks.

In late September, Keyes and the Champion Racing4Detroit team took the checkered flag in both weekend rounds at the 3.4-mile Circuit of the Americas track in Austin, Texas (ARX2 class). Overall, the team finished third after the five races held in the U.S. and Canada. The new year will offer a full championship season and be promoted by IMG, a global sports, talent, and events management company based in New York City.

Closer to home, the Buhl brothers established Buhl Sport Detroit in Corktown, an experiential marketing company that supports racing, plans and hosts events for a number of corporate clients, and operates Teen Street Skills. During the summer months, the latter nonprofit organization teaches area teenagers how to handle cars in adverse driving conditions via a course set up in a parking lot near Michigan Central Depot. Sponsors underwrite the program. 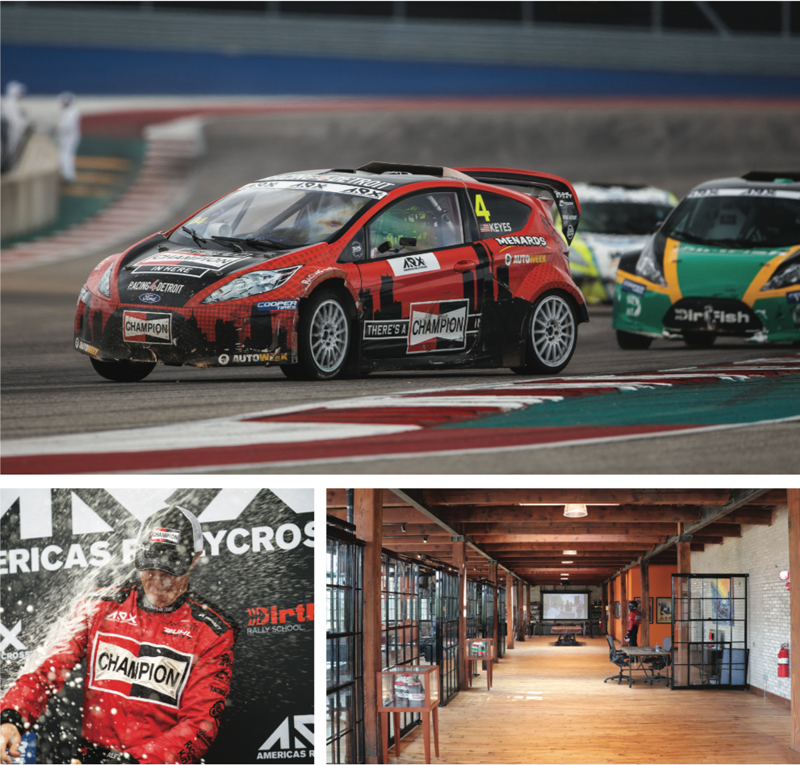 “Car accidents are the No. 1 killer of 16- and 17-year-olds, even as fewer young people are driving,” says Robbie Buhl, a former IndyCar driver who raced in the Indianapolis 500 nine times. “By placing the students in adverse conditions in a controlled environment, we teach them skills they can use for a lifetime.”

All of the Buhl family’s racing, driving, and event marketing programs are operated from The Factory, a pair of historic brick structures at Michigan Avenue and Rosa Parks Boulevard that date to 1907. The brothers acquired the former knitting and hosiery complex four years ago and began renovations with the idea of renting some of the space to an office user.

Around the same time, Bill Ford, executive chairman of Ford Motor Co. in Dearborn, was considering the prospect of acquiring Michigan Central Depot, in a bid to convert the mammoth facility into a mobility and R&D campus. If the plan were to come together, Ford wanted a place where the automaker could get its Project Edison and electrification team in place right away, rather than waiting for what would be a four-year renovation of the depot.

“We know Bill, of course, and when the (idea) came together, we were more than happy to sell Ford Motor Co. The Factory, and they were kind enough to lease some of the space (the eastern structure) to us,” Buhl says. “The Ford team is in place and we have our space, and it’s been a very good arrangement.”

As the automaker announced its official plans in June to convert the depot and the neighboring Roosevelt Warehouse into R&D labs, offices, lofts, and public areas with stores and restaurants — to be completed sometime in 2022 — the Buhl brothers were putting the finishing touches on Buhl Sport Detroit.

The first-floor space, which can be entered from the rear alley via a garage-style door, houses multiple vehicles set on polished concrete. The collection includes the Ford Focus race car driven by Keyes, several IndyCars spanning Buhl’s career, two Ford GTs, an early 1960s Lincoln Continental convertible, and other cars. The brick walls are adorned with rare racing memorabilia, framed photos, and a stunning canvas depicting the pits from the mid-1960s Le Mans races in France, where Ford and its GT40s won multiple 24-hour circuits.

Part museum, the space can accommodate large groups for educational and entertainment programs.

A second level includes offices for the Buhl family’s racing and marketing programs. In a historic twist, the office dividers were crafted from the original window frames. There are also two pinball machines (Indianapolis 500 and “Pirates of the Caribbean”), a hockey game (Detroit Red Wings vs. Toronto Maple Leafs), prints of the Detroit Grand Prix and racing legends like the late Carroll Shelby, a large open kitchen, and miniature car displays.

“Our goal was to bring the first race team here, which, when you think about it, was a big surprise given we’re in the Motor City,” Buhl says. “You think someone would have done it before. Going forward, we encourage com-panies and individuals to use our space for their educational and entertainment needs. We also want to expand Teen Street Skills to reach more students.”