Recall the final scene of “The Raiders of the Lost Ark,” when the Ark of the Covenant is sealed in a wooden crate and wheeled into an immense government warehouse brimming with thousands of other wooden crates, statues, monuments, and paintings. That endless array of goods is an apt description of Lipari Foods in Warren, arguably the largest distributor of food products in the Midwest.

With more than 250,000 square feet of warehouse space, including a massive walk-in freezer that rivals the size of a Home Depot, founder Jim Lipari can’t believe how far the business has come over the years. After his parents sold Lipari’s Market on Detroit’s east side in 1952, Jim hit the streets and started a small distributorship of unique grocery items. His Ford station wagon served as the first of what is today a fleet of 140 delivery trucks.

“In those days, you did whatever you could to make ends meet,” says Lipari, who is joined in the business today by his wife, Rose, and two grown children: Thom Lipari, president and CEO, and Lori Adams, executive vice president. “The business was not an overnight success,” he adds. “We had some failures.”

Early on, Lipari distributed plastic containers, reusable cloth wipes, and condiment dispensers to grocers. In 1955, in a bid to boost his earnings, he worked weekends cutting meat at Hershey’s Market at Jefferson and Chalmers.

Eager to return to the grocery business, he opened Lil’ Giant Market in 1958 on Detroit’s east side, but the business didn’t last. The reason: Lipari and his partner, John Bazzo (the pair met at Hershey’s Market), were stretched too thin juggling both jobs. 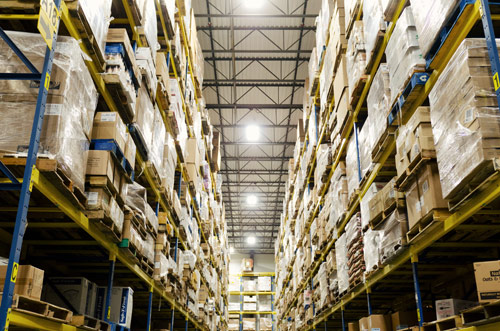 “You can follow your dream and open a business, but unless you can devote 100 percent of your time to make it work, it’s going to be really tough to succeed,” Lipari says. “It was a valuable business lesson.”

In the ensuing years, Lipari Foods expanded to deliver cheeses, deli meats, frozen bread dough, and seafood. Today, the company distributes more than 10,000 food items across 11 states, with 97 percent of the business consisting of next-day deliveries. “Our enabler has been technology,” Thom says.

To save time, fully loaded trucks leave the Warren facility each night. A few hours later, a driver meets an empty Lipari truck from, say, Milwaukee, at a halfway point. The drivers quickly switch vehicles, and the operator of the empty truck returns to Warren.

During the day, the trucks are stocked in Warren via electric-propelled flatbed carts guided by warehouse personnel wearing headsets. A computer, equipped with audio features, provides the workers with information including the destination and quantity of specific items to load onto the trucks. “Speed to market is one of our specialties,” Jim says, “but the secret to our success is customer service.” db