Can Michigan ever become as synonymous with launching rockets into space as Cape Canaveral? Probably not, but the Michigan Aerospace Manufacturers Association in Sterling Heights and the Greener Earth Advisory Services investment company are hoping the Michigan Launch Initiative will put the Great Lakes State in that conversation by 2022.

“We’re looking to fund the whole project,” says Maltese, who’s based in Naples, Fla., and has an office in Troy. “We’ve been working with Gavin for some time, and we’re very excited about it.

“The Michigan Launch Initiative is good for the economy in general, but it’s great for Michigan,” she adds. “It’ll be great for the municipalities involved, and it appears the federal government is showing interest and support. All those things, combined, make it a perfect scenario for us bringing funding to it. We believe in it and we believe in Gavin’s ability to get it done.

Even with Greener Earth on deck to provide initial funding, Brown says there will be many opportunities for other investors to participate in the space port, a proposed command center, and a center for research and development, as well as testing for vertical and horizontal (from airplanes) launching of low-Earth-orbit satellites.

Between 2007 and 2018, about 1,200 small satellites were launched into orbit. Over the next decade, more than 7,000 small satellite launches are planned by the U.S. Department of Defense and aerospace companies like SpaceX, Blue Origin, ISRO, ESA Vega, and Firefly Aerospace.

The DOD added even more to the nation’s space launch capabilities demand in January when the Trump administration unveiled the long-awaited Missile Defense Review. The report calls for the development of new space-based sensors that can detect long-range enemy missiles while still in the boost phase of flight, and perhaps even before they’re launched.

It also calls for the study of whether lasers can be used to counter ballistic missiles launched by rogue states such as North Korea and Iran, and countermeasure space-based threats from Russia and China.

“In terms of new facilities, it depends how many of the new launch services are going to succeed,” he continues. “Initially, Firefly is going to launch from Vandenberg, and we’ll evaluate new sites as they become available and based on our needs.”

The government’s space defense plans, together with the world’s seemingly insatiable need for instant communications, GPS, mobility, and connectivity, are creating a new space race of sorts between states that want to get in on what some experts are projecting to be a $28-billion enterprise by 2028. 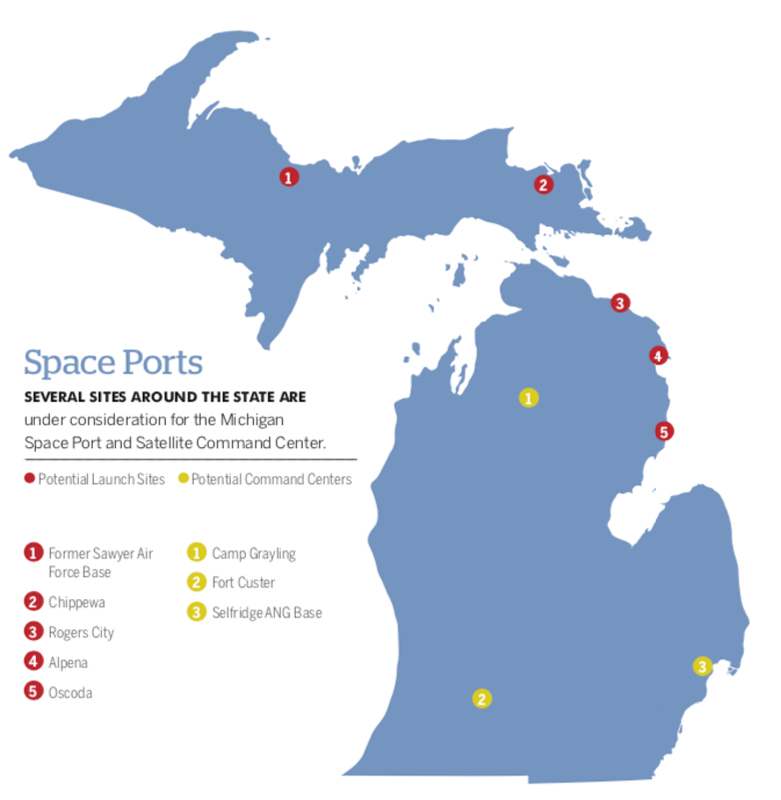 In addition to Michigan, states such as Colorado, Oklahoma, Georgia, Maine, New Mexico, Texas, California, and Florida each have expressed interest in building launch facilities. As many as two or three new space ports may be approved by the federal government.

Michigan, however, has several advantages in this space race, according to Brown. “The key here is that we’re ahead of the game in trying to put this space port into operation by 2022,” he says. “Other states will take anywhere from six to 10 years because they aren’t approaching it from a business perspective like we are, but from the perspective of trying to get the government to pay for everything.

“Northern Michigan is uniquely positioned for a polar orbit satellite launch facility,” he adds. “It has a low-density population, the most restricted airspace east of the Mississippi River, and access to the interstate highway system, and engineering and manufacturing capacity are readily accessible.”

Michigan native and Apollo 15 astronaut Al Worden says: “There are many rocket launch sites in the world, each designed to launch in specific orbits. A site in northern Michigan could be an efficient place to launch into certain inclination trajectories. It would have a high latitude for high-inclination orbits, and sparsely settled terrain, and large lakes under the launch trajectories for greater safety.”

Lower Peninsula sites under consideration for the Michigan space port are Rogers City (on the shores of Lake Huron between Alpena and Cheboygan), Oscoda (home of the decommissioned Wurtsmith Air Force Base), and Alpena (just north of Oscoda). In the Upper Peninsula, Chippewa County (directly north of the Mackinac Bridge and the Sault Ste. Marie State Forest) and the decommissioned K.I. Sawyer Air Force Base (now Sawyer International Airport) in Marquette County are other candidates.

Among the criteria MAMA is seeking in a launch site, according to Brown, are down-range safety, either unpopulated land or water sites, easy access to major freeways, and an air strip.

Reasons for the runway include ease of rocket and satellite parts delivery, and the idea that satellites can be launched into orbit from airplanes.

“Once we have the site selected and the paperwork is signed, the investors will come in and work on the site survey and the architecture,” Brown says, describing what will be a collaborative effort between federal, state, and local governments, and industry.

Brown’s vision for a Michigan space port, wherever it is, includes an industrial park with a clean room for the assembly of rockets and mating satellites to launch vehicles. Launch pads with heated gantries, to make the site an all-weather facility, also are desired.

“One of the difficulties is the logistics of transporting all of the components to the launch sites,” Brown explains. “We’re going to eliminate that by providing the launch site with assembly capabilities. Often, components get damaged in transit. This eliminates that factor.”

Brown adds that his team is looking to the state’s automotive heritage for the best ways to automate and optimize manufacturing processes at the space port. “We’re going to incorporate those companies in Michigan whose expertise can be translated to space launch facilities.”

In addition, there are planned areas where the public can watch launches of the single-stage, 55-foot-long, 50-inch-diameter rockets and view the facility’s other operations.

“The other aspect of this is tourism,” Brown says. “You’ll see thousands of people in viewing areas. Wherever it goes, it’ll be a rebirth of that local economy. The investment is probably upward of $800 million when all is said and done. It’ll be a hub for academia, industry, and the public. Everyone in the area will be exposed to the newest space technology.”

Troy Thrash, president and CEO of the Air Zoo Aerospace and Science Museum near Kalamazoo, would welcome a Michigan space port as an educational opportunity.

“While students can see, hear, and touch airplanes almost daily here at the Air Zoo, providing critical personal context to inspire young people in aviation, rockets, and satellites remains elusive,” Thrash says. “A launch site in Michigan will bring this important activity very close to home for our students, providing them with remarkable inspiration to dream higher and, one day, become Michigan’s rocketeers of tomorrow.”

In addition to the launch facility, Brown is lobbying for a Michigan space command center that will control and track the satellites launched from the state. He says the center doesn’t need to be adjacent to the launch site. Locations are under consideration throughout Michigan, including Fort Custer in Kalamazoo County, Selfridge Air National Guard Base in Harrison Township, and the Michigan National Guard’s Camp Grayling. The command center will track satellites around the clock.

Meanwhile, once the space port site is selected and approved, funding, permits, and an environmental impact study should be completed by the third quarter of 2020. Construction is anticipated to be finished in 2021. At full capacity, the space port is expected to conduct between 25 and 52 launches per year.

“For industry, for business, (and) for developing a greater expansion of the technological ecosystem in Michigan, it would be very good,” Mike Carey, co-founder of Atlas Space Operations in Traverse City, says of the proposed Michigan space port and command center. “The idea of a launch capability in Michigan would definitely provide impetus to Tier 1 and Tier 2 suppliers to support such an endeavor. You need logistics support. You need technical infrastructure.

“We’d have to bring in a lot of engineering support,” he adds. “It would be a fabulous opportunity for employment. It would leverage the capacity the state already has, and it would draw from outside (the state) to grow the economy.”

Carey’s company, which moved from California to Michigan in 2017, provides antennas and software for Earth-to-satellite communications. “Any endeavor that increases the number of spacecraft in orbit would benefit our industry, as we’re a service provider for spacecraft owner-operators,” he says.

In the meantime, Brown and MAMA are marshaling their investors, and working with various government entities, including a late January meeting with the state’s Congressional delegation and other national leaders, to make the Michigan space port a reality. “We’re in position to lead the effort in the state to do this,” Brown says, “but we’re going to do it at the speed of business, as opposed to the speed of government.”

While not as storied and lengthy as that of Cape Canaveral, Michigan does have a history of rocket launches.

Between 1964 and 1971, the U.S. Army, U.S. Navy, NASA, the University of Michigan, and Michigan Technological University launched suborbital rockets to collect meteorological data from the Keweenaw Rocket Range, an isolated launch pad on the Keweenaw Peninsula in Michigan’s Upper Peninsula. 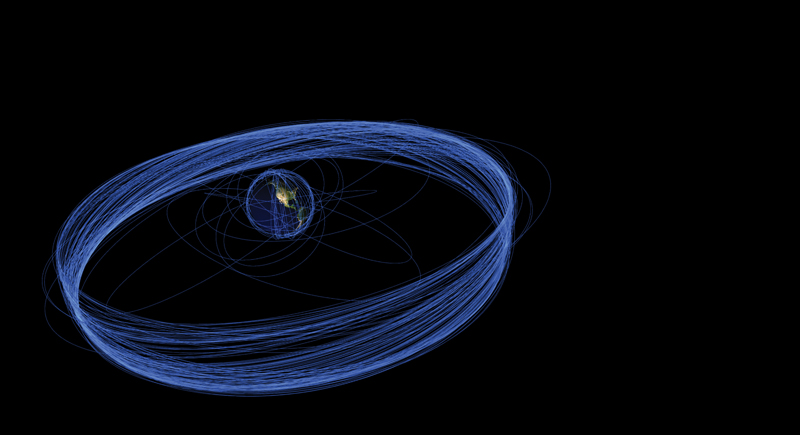 Any launches of small satellites from Michigan would undoubtedly contribute to what is becoming a problematic traffic jam
in space.

On Oct. 4, 1957, the Soviet Sputnik 1 was the only man-made object orbiting the Earth. Today, as a result of the space race and humanity’s need for communications and connectivity, there are more than 40,000 objects circling the planet. Most of the objects are inactive satellites and fragments from collisions between satellites.

The U.S.-based Space Surveillance Network tracks these objects, which amount to about 7,600 metric tons of debris traveling at 17,500 miles per hour. The volume of space junk is a threat to the International Space Station, people performing extravehicular activity around the station, and to other active unmanned satellites that carry price tags in the hundreds of millions of dollars.

“The real concern is a collision with debris between satellites,” says Mike Carey, co-founder of Atlas Space Operations in Traverse City. “If two inactive satellites hit each other, it’s damaging to the environment because it creates more trash.”

Experiments aboard the International Space Station are exploring ways to actively clean the cosmos of space junk rather than letting it all burn up in the atmosphere in its own time.