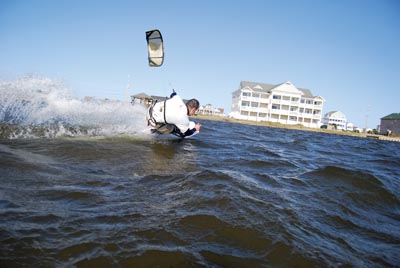 Multitasking comes easy for Mark Kuban. After a 10-year run as a home goods sales representative, Kuban jumped into kiteboarding — a sport that’s actually been around for more than a century — full time in 2008. Kiteboarders use a large, inflatable kite to reach speeds approaching 30 mph, whether they’re on water or snow.

“A lot of windsurfers have made the switch to kiteboarding because it’s a year-round sport,” says Kuban, 38, owner of Motor City Kiteboarding in East Tawas, along Lake Huron.

John Shamraj, a dentist in Pinckney, near Brighton, says he started kiteboarding four years ago. “The higher you get up (70 feet or so), the more consistent the wind is,” he says. “When the wind is inconsistent, it seems all the windsurfers are heading in, and the kiteboarders are having all the fun.”

In addition to being the Midwest sales representative for Liquid Force, a California-based manufacturer of kiteboarding equipment and accessories, Kuban has trained dozens of thrill-seekers in the sport. Although his surf shop is located in East Tawas — complete with nearby cottages for rent — he says many of his sales are generated over the Internet.

“We sell and rent the equipment, and there are mandatory lessons,” he says. “I’ve trained business executives, baseball players, brain surgeons, ER doctors, dentists — it’s a diverse population.” Most people with decent physical skills can pick up the sport after a few lessons, he says.

Naturally, the pros make it look easy. “Everyone in the sport is a wind-casher,” Kuban says. “Ideally, you’re looking for winds between 15 mph and 20 mph. In the snow, you don’t need as much wind because there’s less resistance.” To research the best wind areas, most kiteboarders have their computers loaded with weather links. There’s also an iPhone App (www.ikitesurf.com) that will send an alert when the winds are just right.

Getting started in the sport, which is gaining popularity in surf-friendly places like Florida, the Carolinas, California, Hawaii, Europe, and Australia, requires some investment. A board, kite, harness system, and related accessories can run anywhere from $1,500 to $2,500 (Kuban offers free lessons to people who spend $2,000 or more).

About 70 percent of kiteboarders are men, Kuban says. With the sport still evolving, new tricks — seasoned riders can spin in midair, ride rails, or jump from ramps — are still being developed. “When you get good wind and catch an updraft, you can go flying,” Shamraj says.