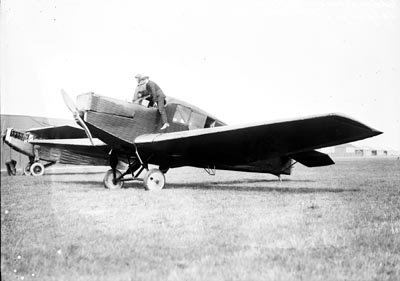 When the 55-gallon fuel tank ran dry during a test flight of a new aircraft, Detroiter Eddie Stinson aimed his new plane for Chicago’s Jackson Park golf course. With more than 16,000 flying hours, “The Dean of Aviators,” as Stinson was called, had sure command of the gliding descent.

But in the gathering dusk of that January day in 1932, he struck a flagpole, and the Model R crashed hard. His three passengers were only slightly injured, but Stinson was pinned in the wreckage. He died a few hours later at the age of 37.

Six years before the tragedy, Stinson was giving exhibition rides in his prototype six-seater at Packard Airfield in Utica. The event was conducted for 25 investors, who’d put up $1,000 each.

Stinson’s timing couldn’t have been better. Hosting the 1922 Pulitzer Trophy air races (pilots took off from Selfridge Field and followed a triangular course above Lake St. Clair) had whetted Detroit’s appetite for flying. Even earlier, some envisioned the city dominating not only in automobiles and speedboats, but also in planes. As a barnstorming pilot, military aviator, and avid instructor, Stinson added a knack for engineering and a sense that business aviation was coming into its own. He was perfect to lead the fledgling enterprise.

His 1926 Stinson Detroiter biplane featured such novelties as a heated enclosed cabin, electric engine start, and wheel brakes for short landings. The luxurious cabin, meanwhile, offered ashtrays and upholstered seats. Powered by a 200-horsepower Wright Whirlwind radial engine, the Detroiter flew at 125 miles per hour. Things looked promising, and so the Stinson Aircraft Corp. was capitalized to the tune of $150,000. Production started at a Northville factory, which was owned by an investor.

Of the 26 initial Detroiters that sold at $12,500 each, three went to the fleet of the fledgling Northwest Airlines. Other customers were the Marmon Motor Car Co. and Shell Oil distributor Edward Schlee, who based his Wayco Air Service in Detroit.

Stinson and partner Bill Mara, the company’s sales and marketing whiz, understood the need to develop a monoplane. Even more advanced and luxurious, their sleek new high-winged Detroiter held the price line. With 200 workers toiling in the cramped factory, Mara found customers for their output in the governments of Peru and Mexico, as well as a forerunner of American Airlines.

Scarab radial engine powered the four-passenger plane, which sold for $6,750. The company had been reorganized and, because some shareholders were developing the Detroit-Wayne Industrial Airport along the Pere Marquette Railroad line between Van Born and Ecorse roads, Stinson moved to a new factory there. Increasing production capacity led to the company’s dramatic growth. “By the end of 1930, Stinson was outselling all other cabin airplanes in the U.S.,” wrote the late John A. Bluth in his useful Stinson history, Stinson Aircraft Company.

Automotive visionary E.L. Cord acquired the company in 1929 but kept management in place. Multiengine airliners became part of the product mix, along with less-expensive but high-quality light planes. The gull-winged Reliant got the company through the Great Depression when other Detroit aircraft operations like Buhl and Verville failed. Ad copy claimed the $3,995 Reliant was “an airliner for the businessman and commercial operator.” Some 1,500 units were built.

Mara provided strong leadership after Eddie Stinson’s death. He developed the 1939 Model 105, with a new type of lightweight, horizontally opposed, four-cylinder engine. This was the basis for thousands of units for civilian and military applications. Other holding companies like Aviation Corp. (AVCO) and Consolidated Vultee entered and left the picture. But after competitor Piper Aircraft Corp. bought Stinson in 1949, it gradually wound down operations, ending the run of the world’s most prolific manufacturer of sleek cabin airplanes. db