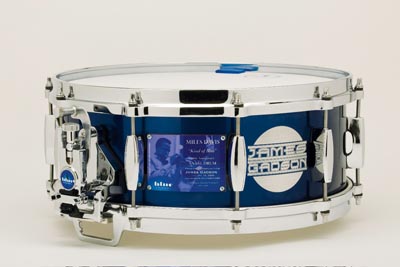 Stephen Badalament says his drums are world-beaters. “I can confidently say my drums will do 200 percent more work than you could ever ask them to,” says the founder and CEO of Bloomfield Hills-based Innovation Drum Co., makers of elite, custom-built, handcrafted drum kits.

Offering arguably the world’s most expensive drums — $10,000 for one snare model and up to $85,000 for a complete kit — Badalament says his instruments couldn’t be produced anywhere else. “I think Detroit is the only place it could happen,” he says. “We have the infrastructure to support it here. Because of the Big Three automakers, you have tools that are flawless and calibrated perfectly. Plus, we have computerized casting and ISO 9000 tooling here.”

Badalament, 49, who has been drum-obsessed since he was 3 years old when he saw Ringo Starr and the Beatles make their U.S. debut on The Ed Sullivan Show, says the various components that make up his drums are crafted in three different metro Detroit shops, while final assembly takes place at his production facility in Wayne. Constructed from materials such as titanium, aircraft-quality aluminum, and Michigan hard-rock maple, the drum kits are built to the specific needs and playing style of individual buyers. The lead-up to production includes a one-on-one consultation with the buyer that sometimes takes a year or longer to complete. “It’s beyond handcrafted,” Badalament says. “That’s the easy part.”

The challenge comes in producing highly calibrated parts. “We cast our own hoops (rims) the same way they make church bells in Europe, because they give off a certain sound,” he says. “You hit them with your knuckle and they ring. They’re guaranteed to be completely flat and perfectly round. Our tension rods cannot loosen. The only metal-to-metal contacts are threaded screw parts. I don’t do it for aesthetics. Everything is for the sound.”

“If you were a violin-maker and could make an instrument today that sounded like a 2,000-year-old Stradivarius, wouldn’t you?” White asks. “That’s what Steve does. He makes a contemporary instrument that sounds better than any old instrument. That’s the only reason I play them — because they’re the best drums.”

An accomplished, Interlochen-trained drummer in his own right — he’s toured with the likes of Patti Austin and Keith Washington — Badalament initially launched a business called Renovation (now a subsidiary) to refurbish old drums. Before the Rolling Stones’ 1997 “Bridges to Babylon” tour, Badalament and his team completely restored Charlie Watts’ prized drum kit in 11 days before deciding to drum up clients for his own instruments a year later.

His latest project, in partnership with Miles Davis’ estate, is the creation of a limited-edition series of “Blue Drums” to commemorate the 50th anniversary of Kind of Blue. And although Badalament wouldn’t disclose his annual revenue, he does say that it’s gone up in each of the last three years.