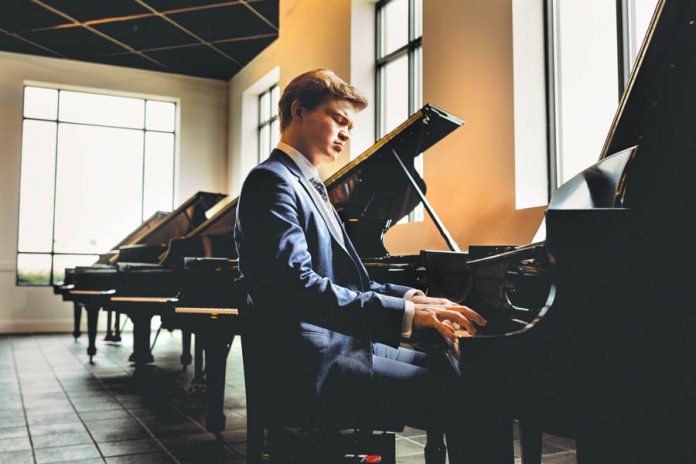 Born in Russia in 1990 and raised in Grosse Pointe, Ivan Moshchuk quickly made a name for himself as a classical pianist. Moshchuk made his concerto debut at 11, and won several prestigious musical awards by the time he graduated from Grosse Pointe South High School.

Now, at age 26, he’s determined to promote Detroit as a center of musical talent — all while learning the ropes of the touring, booking, filming, and merchandise markets. To that end, he recently launched Detroit Sessions, a series of musical and artistic shows that showcase the city and region at local venues like Jam Handy in the New Center area. The shows are recorded and shared with global audiences through sound and film.

“When I was starting out at 18 years old, I received an award from the Gilmore Foundation in Kalamazoo. Part of the award included several engagements, and that set me up to get repeat engagements,” says Moshchuk, principal of INM Enterprises in Detroit. “I play throughout the world. Early on, when I was in the Netherlands, I worked with contacts there to arrange my European tours, either partnering with concert agencies or booking them myself.”

He performs around 25 concerts a year. Fees for individual concerts start out at $2,500 and go higher, based on the size of the venue and other factors. Two years ago, he produced his debut album, “Forgiveness,” which features the work of Rachmaninoff and Beethoven. In relation to the album, he also made a short film.

“Under Detroit Sessions, we’re planning an outdoor concert that will be filmed at Roosevelt Park in front of the Michigan Central Depot,” he says. “I’m very much looking forward to playing outdoors (likely in June).”

He’s also working on several albums that will be marketed and produced by Detroit Sessions. “I learned early on to do things myself,” he says. “I was offered a record deal in Europe, but they wanted to license the album for 10 years, give me 500 albums to sell myself, and then they would give me 14 percent of each record sold. It was a standard deal, but I decided not to do it.”

To better learn the business, Moshchuk says he closely follows the hip-hop industry. “The hip-hop artists largely control their destinies by doing most everything by themselves, and the artists have their own lifestyle brands,” he says. “They’ve driven a lot of innovation over the last 20 years, and that’s what I want to bring to classical music, with a real focus on Detroit.”