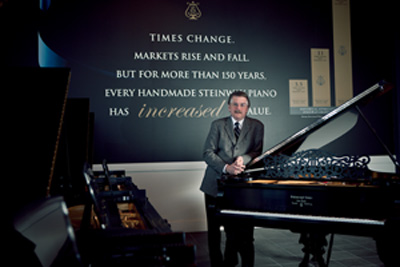 Talk about a shifting economy. The recession, a drop in financing options, and a reluctance to spend money have impacted the market for fine pianos like never before. “Guilt can be a contributing factor for people with means, who otherwise would buy a big-ticket item,” says Tim Hoy, president of the Steinway Piano Gallery in Commerce Township.

Hoy isn’t presumptuous enough to say he saw the economic downturn coming, but six years ago a change in customers’ buying habits, combined with the need to boost efficiency, was enough for the longtime merchant to consolidate three area piano outlets into a factory store.

At 30,000 square feet, Hoy’s neoclassical gallery is one of the largest in the country — and the top Steinway dealer in the Midwest. Detroit’s musical heritage, from jazz to classical to Motown to rock, helps propel sales. So does the region’s relative wealth, generated by four generations of automotive executives — “old money,” Hoy explains.

With more than 100 pianos for sale or rent at any given time, Hoy and his 10-employee staff aren’t sitting idly by waiting for customers to stream through the door. “We just did a closed-door sale of used pianos for alumni at the University of Toledo, and everything was sold,” he says. “When the customers don’t come to you, then you go to them.”

A prime example of successfully combining multiple operations under one roof: The gallery refurbishes pianos, accepts trade-ins, handles repairs, and offers music, art, and language lessons to children and adults. “Our custom work is growing, and we have four or five events here a month to enhance our brand awareness and show off these fine musical instruments,” Hoy says, pointing out the facility’s 300-seat recital room and lecture hall.

Heinrich Steinway, a cabinetmaker from Germany, founded Steinway & Sons in New York in 1853. His pianos were of such fine quality — in some cases it took, and still takes, nine years or more to age the wood — that even today, 98 percent of the world’s professional musicians play a Steinway.

As the Industrial Revolution helped raise living standards, the piano often became the second major purchase of well-to-do families in the early 1900s. “The piano was considered a noble purchase that exuded sophistication and intelligence,” Hoy says. “It was the center of family entertainment, and more than 400,000 were sold at the turn of the last century in the U.S. alone.”

Sales were fairly brisk up until 1940, when the outbreak of World War II led many industrial operations to switch over to armament production — Steinway & Sons produced airplane wings during that time. After the war, the market for pianos began to recover, posting 300,000 units in annual sales in the U.S.

In recent years, thanks in part to competing forms of entertainment combined with cutbacks in school music departments, some 30,000 new pianos are sold annually. “Pianos last a long time,” Hoy notes. “For every new one we sell, five or six pianos trade hands on the used market.”

Overall, new pianos account for 60 percent of Hoy’s sales each year, with the rest coming from trade-ins and rentals. “As tempting as it can be, we’ve never discounted our prices,” Hoy says. “Yes, you’re buying a piano, but you’re also buying an appreciable asset.” db