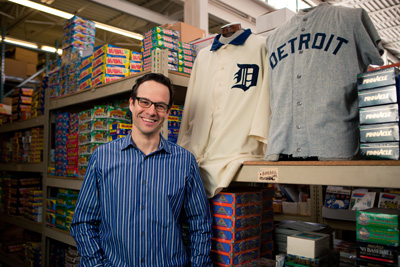 George Kruk bankrolled part of his college tuition selling baseball cards — and he’s still at it. Today, the 42-year-old eBay “powerseller,” together with 13 employees, operates Kruk Cards out of a large warehouse in Rochester.

Kruk’s house of cards contains more than 50 million items and, on any given day, the entrepreneur lists over 5,000 pieces on eBay. Auctions have included a 1958 Topps Pee Wee Reese card for $9.59; a $14.99 autographed Jose Canseco photo; and a 1967 Detroit Tigers jersey, worn in a game by Bill Freehan, listed at a minimum bid of $2,499.

“I really enjoy buying entire collections … especially when I can sell something for twice what I paid,” says Kruk, who often acquires inventory through “buying” ads he posts in newspapers, trade publications, and on Craigslist.

Kruk first caught the bug for wheeling and dealing as a freshman at Michigan State University, after circulating fliers on campus offering to buy entire baseball card collections from fellow students looking for extra cash. Kruk, who often traveled to baseball card shows on weekends and throughout the summer, fondly recalls buying one set of cards for $200 and selling it for $2,000.

After earning a degree in finance in 1991, the Rochester native pursued his passion full-time during a period when baseball, football, and hockey trading cards were popular.

Although the card craze bubble burst in the mid-’90s, due to an oversupply of manufacturers, cards, buyers, and the 1994 baseball strike, Kruk Cards is still one of the country’s largest dealers. “Investors have basically left the card business, and now it’s back to the roots with the pure collectors,” Kruk says.

He attributes his success to persistence, hard work, and the ability to adjust to changing markets and tastes. Over the last 11 years, Kruk and his team have sold 300,000 items on eBay.

“Out of necessity, we’ve had to diversify because cards simply are not hot anymore … we’ve focused more on game-used jerseys, autographs, and other sports memorabilia,” he says. “I believe our growth is in memorabilia. People still want to be close to the athletes, and cards may not get them as close as much as a signed baseball or an item used in a game.”

Currently, 75 percent of Kruk’s sales are via eBay, but he is constantly looking for other ways to boost business. db