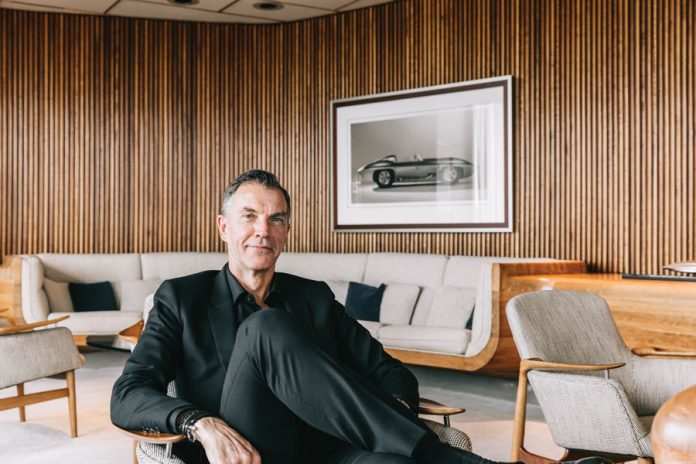 “I had no real intention of being an automobile designer,” Mike Simcoe confesses as he escorts a visitor down the suspended terrazzo staircase at General Motors’ Design Center in Warren. Ironically, Simcoe today holds one of the rarest positions in that field — he is — just the seventh person in General Motors’ history to lead its design organization, and occupies the same office as styling icons Harley Earl and Bill Mitchell. He succeeds Ed Welburn, the company’s vice president of global design, who retired in July.

Simcoe trained as a product designer in his native Australia, then moved to England where he worked as a bicycle courier and truck driver before landing a job designing helicopter interiors. He returned to his homeland in 1983 to design vehicle interiors at Holden, GM’s Australian marque. “It was easier to make money in Australia, so I signed up thinking it was only going to be for a couple years — and it ended up being 33 years,” he says.

After proving himself in the Asia-Pacific region, Simcoe moved to Detroit in 2004 as executive director of North American exterior design. He had been vice president of GM international design since 2014, overseeing studios in Korea, Australia, and India. Throughout his career, Simcoe has spearheaded the styling of the Buick LaCrosse, Pontiac GTO (Holden Commodore/Monaro), and Chevrolet Trax, among others.

On this day, Simcoe looks like a designer: he’s wearing black slacks and a black jacket,  black shirt, and no tie. He’s tall and slim, and speaks in a soft, deep voice. Thin white sideburns frame his jaw, recalling the modest strips of chrome trim on the Buick Avenir concept car that his team developed in Australia. Simcoe’s artistic tastes include architects Eero Saarinen, who designed the GM Technical Center, and Spain’s Antoni Gaudí — but not Frank Lloyd Wright (“He did beautiful pieces of sculpture, but they weren’t livable.”) He also enjoys Renaissance paintings, early 20th century poster art, and vintage motorcycles like his 1928 Douglas SW5. 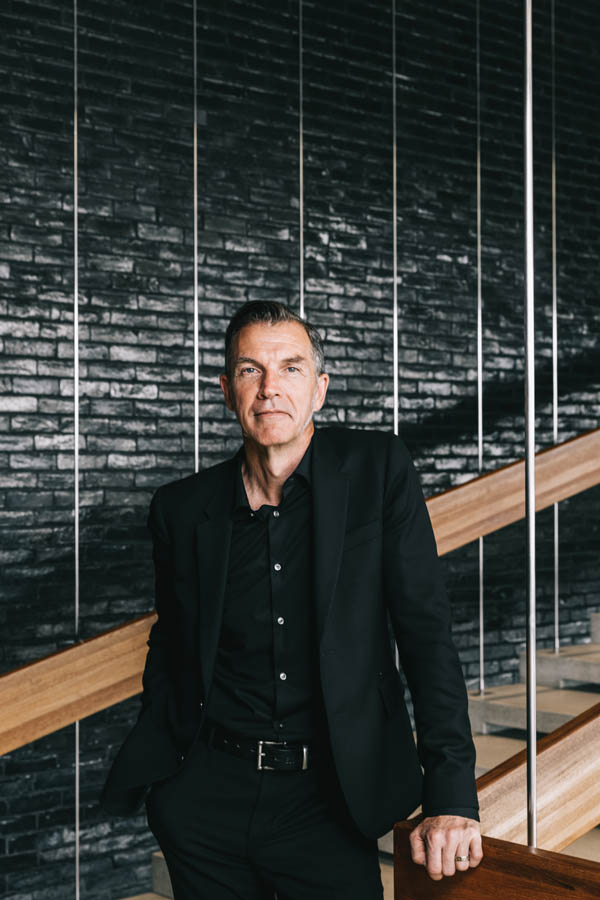 Simcoe received the offer for the top job in a phone call from GM Chairman and CEO Mary Barra, Executive Vice President Mark Reuss, and global HR boss John Quattrone. “It was a fairly daunting prospect initially,” he says, “but since I’ve been here dealing with the designers and the people who manage the business, they are incredibly competent. So I just have to make sure I don’t get in their way. My job, realistically, is to enable them. I have design judgment and must present as a leader, but mostly I’m an enabler to a really good group of people.”

It’s now Simcoe’s job to lead that team in producing winning designs that will appeal to millions of customers around the world. But how does GM, or any company, prevent a design flop that can occur when aesthetics confront finite investment dollars and rigid engineering specifications? Simcoe says it’s all about balance.

“Things usually go bad due to lack of communication and direction, or because a single function dominates,” he says. “If manufacturing or design or engineering or finance becomes dominant, you’ll get a poor outcome. Everything that’s done well is balanced. How do you prevent imbalance? You become a respected design organization. The vehicles we’ve been doing for the last 10 years have all been very good, so that gives you a strong voice and grows your influence in the organization.”

Simcoe’s philosophy is that simplicity should guide automotive styling. “I prefer to work with beautifully proportioned vehicles and designs,” he says. “Simple usually works best, with beautiful decoration. Sometimes it’s appropriate to have a lot of animated surfaces, but done in a way that’s not over-excited or doesn’t shout at you. There are many vehicles around that look over-styled. If you don’t need the extra line, then don’t do it.”

After meeting Simcoe at a recent Paris Motor Show, Robert Cumberford, automotive design editor for Automobile Magazine and a former GM designer, said, “I found him to be intelligent, affable, well-clued in on what is and isn’t important in design. I think he’ll be very good at his job, but we’ll have to wait a few years to see what comes out in production to really get his measure as a politician as well as a designer.”

As Simcoe settles into the job, comparisons to Welburn are inevitable. “Ed has a larger-than-life personality — a presence, almost an aura about him,” Simcoe says. “He also has an admirable grace when dealing with people. He’s an artist and I’m a rationalist. I come in knowing some people and I’m a mystery to some, which is quite good. I have a different personality from Ed, and that’ll come through in the product ultimately (and the way I lead). You don’t need more of the same. People are anticipating change, so I won’t let them down.”