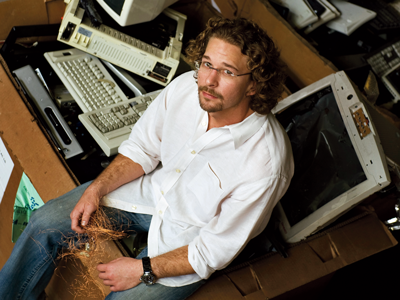 Rising commodity prices are welcome news for most suppliers and recyclers, but Nathan Zach isn’t entirely happy. Operating a fast-growing, homegrown electronics recycling company — revenue has doubled every year since 2000 — Zach says the higher prices he’s getting for copper, brass, and steel can be problematic. Consider copper trades at around $8,000 a ton, more than quadruple the price from four years ago.

“I like it when the commodity prices are low because, as the prices rise, it draws a lot of competitors to our industry that don’t know what they’re doing, and I wind up cleaning up the mess,” says Zach, 27, president and CEO of Great Lakes Electronics in Detroit. “I’ve had to bail out more than a few people already.”

After launching the business from his garage, Zach now operates from an 80,000-square-foot warehouse near I-96 and Greenfield. The complex handles everything from computers and circuit boards to telephones and communication equipment. Customers include corporations, retailers, and government agencies.

“In this business, it pays to have the best and biggest equipment,” says Zach, as he sifts through a bin of computer wiring during a recent tour. “It was easier when the numbers were smaller and I had a handful of employees. Now we have more than 120 workers, and we’re operating facilities in Atlanta, Chicago, Florida, Ontario, and soon, Texas.”

He’s also in the market for more salespeople, all the while looking for more personal time in a business that demands he be at the office seven days a week. “The one thing I’m working on is being better organized so I can take some time off,” Zach says. “It was easier when I used to be the guy out on the forklift. Now I’m the guy on the airplane flying four times a week.”