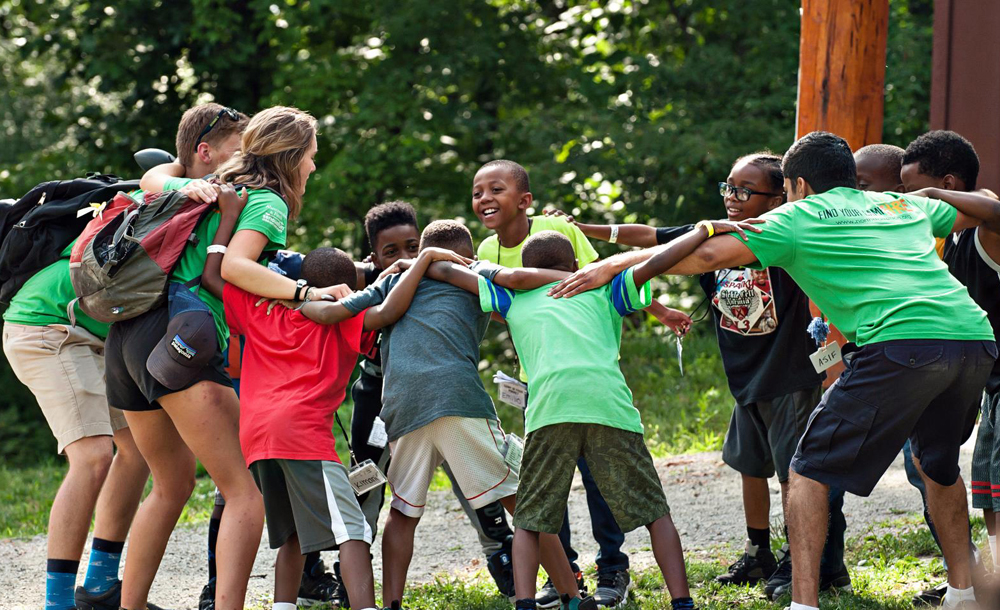 Campers and camp counselors have a group huddle at the nonprofit summer camp. Photograph Courtesy of North Star Reach.

After accommodating more than 1,000 children with serious health challenges over the last two years, the nonprofit summer camp North Star Reach in Pinckney is on pace to meet its goal of hosting 1,500 campers annually starting in 2019.

One of the camp’s highlights last year was the construction of a handicap-accessible tree house that debuted on DIY Network’s “The Treehouse Guys.” In addition, the camp, set on a 105-acre peninsula owned by the University of Michigan and leased to North Star Reach for $1 per year, expanded its waterfront program with a pontoon boat and a fleet of canoes and kayaks, as well as a fishing dock. It also opened two heated outdoor swimming pools, complemented by a warming hut and a snack shack.

“We draw children and their parents from southeast Michigan, outstate Michigan, and bordering states, along with Ontario,” says Lisa Schwartz, vice chairman of North Star Reach’s board of directors. “For most children, everything is provided at no cost. We plan to have seven week-long summer camps this year, and we plan to offer eight next year. We also have a state-of-the-art health center called The Observatory, which is staffed around the clock while camp is open.”

“Our camp is a truly supportive environment for these kids, one where all of their medical needs will be met by professional doctors and nurses, and one where they can make new friends with peers facing similar challenges,” says Doug Armstrong, founder and CEO of North Star Reach.

Other amenities and offerings at the camp include an auditorium, 12 climate-controlled cabins, nature hikes, archery, arts and crafts, low ropes, and campfire skits and songs. The camp completed a provisional membership and is now a full member of the SeriousFun Children’s Network, founded nearly 30 years ago by actor and philanthropist Paul Newman.