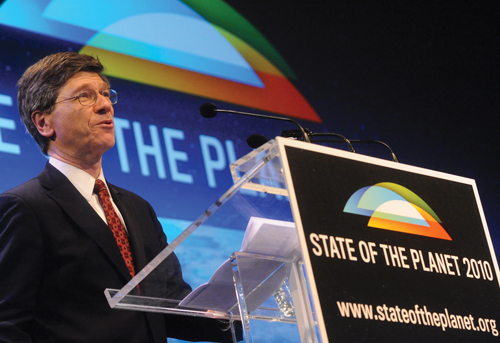 Jeffrey Sachs, an economist and director of the Center for Sustainable Development at Columbia University in New York City, can’t say exactly at what point he realized had a knack for numbers.

But then he’s reminded of a long-ago math competition at Robert Frost Junior High School in his hometown of Oak Park, designed for students who were regarded as “gifted kids.” Sachs won it hands down, and his reward was being able to attend a summer camp at Oakland University in Auburn Hills, where he took a course in what was described as college-level math.

“Well,” Sachs says with a sheepish chuckle, “I liked math, but I didn’t regard Oakland University as college-level math. It was a kind of summer camp in math, to learn a little bit of the rudiments of group theory and computer programming.”

While the subject matter wasn’t exactly standard fare for a middle-schooler, Sachs says he wasn’t the only precocious kid in the class. “My campmate was Steve Ballmer (the billionaire former CEO of Microsoft Corp.),” he recalls, “and we drove to and from Oakland University many days together.”

Sachs was always a good student, starting at Francis Scott Key Elementary School, and continuing through Frost and Oak Park High School. “I grew up and lived in Oak Park all my childhood,” he says. “First on Marlow Street, near Greenfield Road. Then we moved to Palmer Woods Manor, off 10 Mile Road near Scotia Road, and then we lived on Dartmouth Street until I graduated from high school.”

While Sachs seemed destined for an academic career, his father’s influence loomed large: Theodore Sachs was a legendary figure in Detroit, serving as general counsel for the Michigan AFL-CIO, as well as for the state Democratic Party. He argued cases before the United States Supreme Court, and was a noted advocate for the rights of union workers. 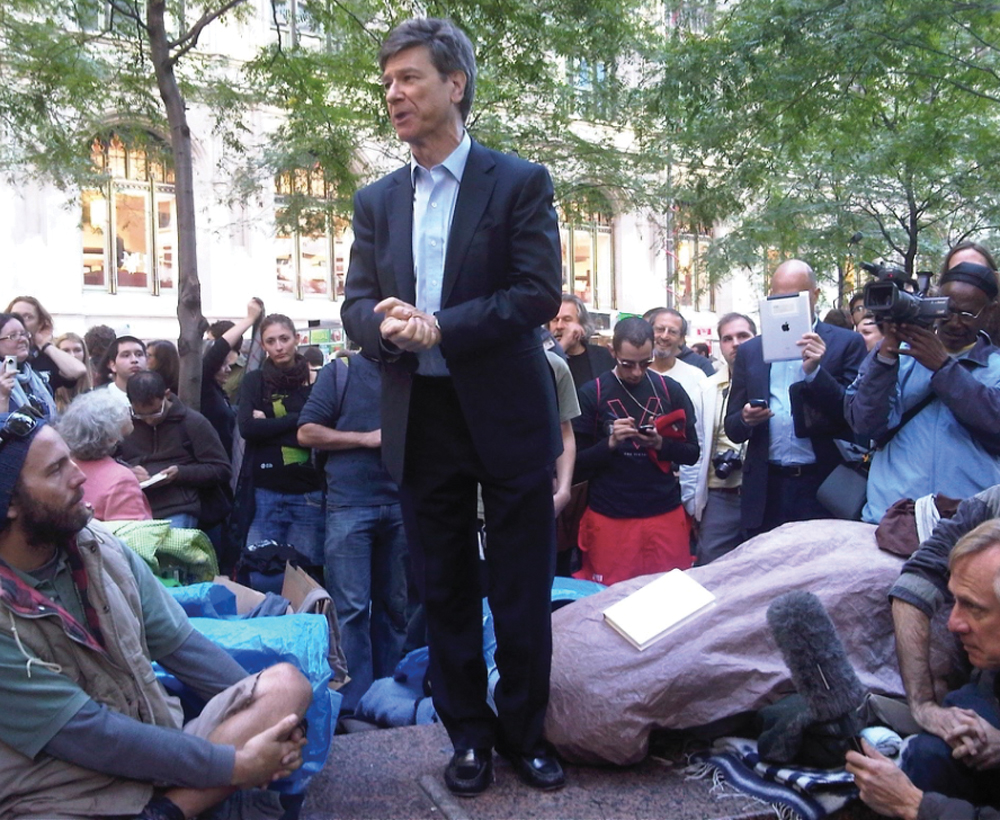 “I went to an FDR summer camp, along with many children of union workers,” Sachs says. “It was the first camp I went to, and we sang union songs. And my dad spent a lot of time with people who’d unfairly gotten thrown out of jobs. He was very involved with workers’ rights and the civil rights movement. So it was an absolutely normal part of my upbringing, and I think there’s no doubt my father was my greatest influence.”

But Sachs had other ideas. “I was doing well in school,” he says, “and by 10th or 11th grade I thought maybe I could try and see if I could get into Harvard University.”

He was accepted to the prestigious school when he was 17 years old. Joined by Ballmer, Sachs fully intended to meet the wishes of his family and become a lawyer. That never happened. “But I got admitted to law school, so that was good,” Sachs laughs.

“I want to do anything I can to help. I’ve talked to some of the key figures about wanting to feature Detroit in this global context as a city determined to make it in sustainable development … I think Detroit is really trying to do it right, and there’s a lot of hope right now that wasn’t there just a few years ago. It is very, very exciting, and all of us Detroiters have to contribute to it.”
— Jeffrey Sachs

Instead, he went on to earn a master’s degree and a Ph.D. in economics, joined the Harvard faculty as an assistant professor, and by 1983 became a full professor of economics with tenure. He was 28.

“I was very lucky,” Sachs says. “I made my way in the academic field at a very quick pace and got tenured, which is kind of the Holy Grail for academics. I realized that not only was I very fortunate and empowered by this to do the things I wanted to do, but it also meant a lot of responsibility. When you have that kind of job security and you’re not reporting to anybody, you have a real responsibility to tell the truth as you see it.” 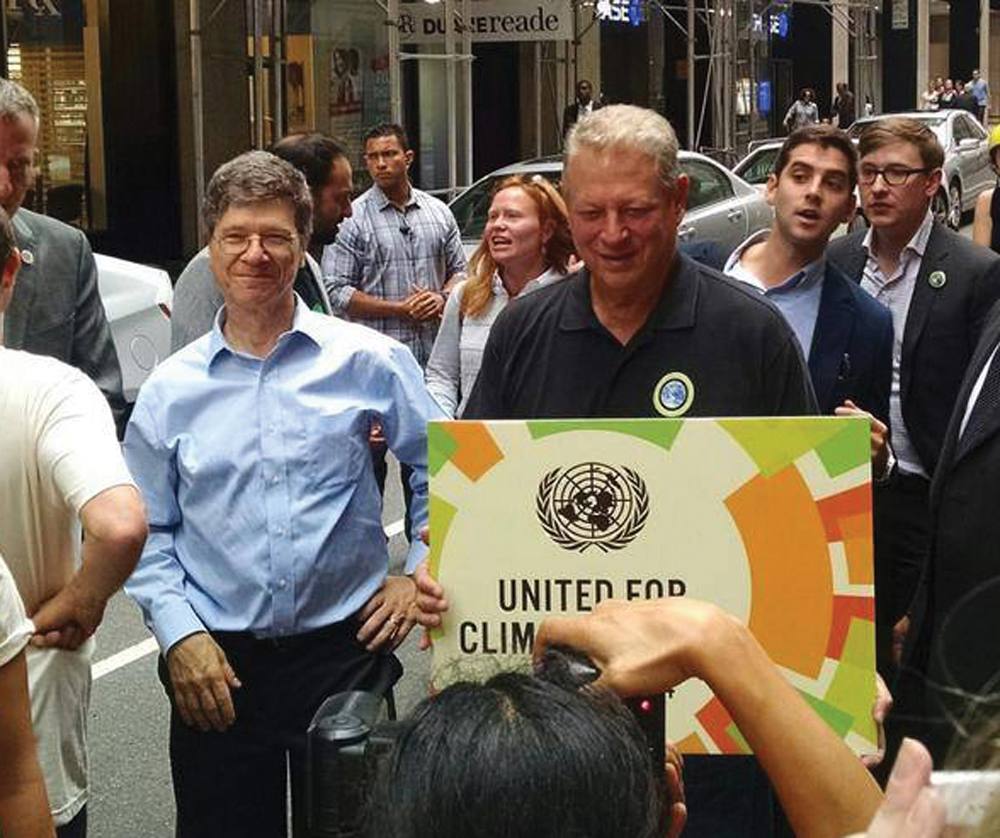 For the next 20 years at Harvard, Sachs earned a reputation as one of the world’s leading experts on economic development and growth, prescribing a regimen of economic reforms for countries in Latin America, Eastern Europe, the former Soviet Union, and Asia — many of which were emerging from communism. In turn, starting in the mid-1990s, he made a heartfelt commitment to fight poverty in Africa.

“As I became a professional development economist, the same basic question kept coming up,” Sachs says. “Why is there poverty in the midst of plenty? Everything one learns as an economist teaches you, basically, that we’re in a position to see the absolute end of extreme poverty in a short period of time if we wanted to do so and made the effort to do so.

“That’s what I learned over time. Of course, what I also learned over time is the kind of partial instinctual, partially trained view of people who say mine is mine, you can’t take anything from me — even if it’s a billionaire speaking. Which is a position I utterly don’t accept.” 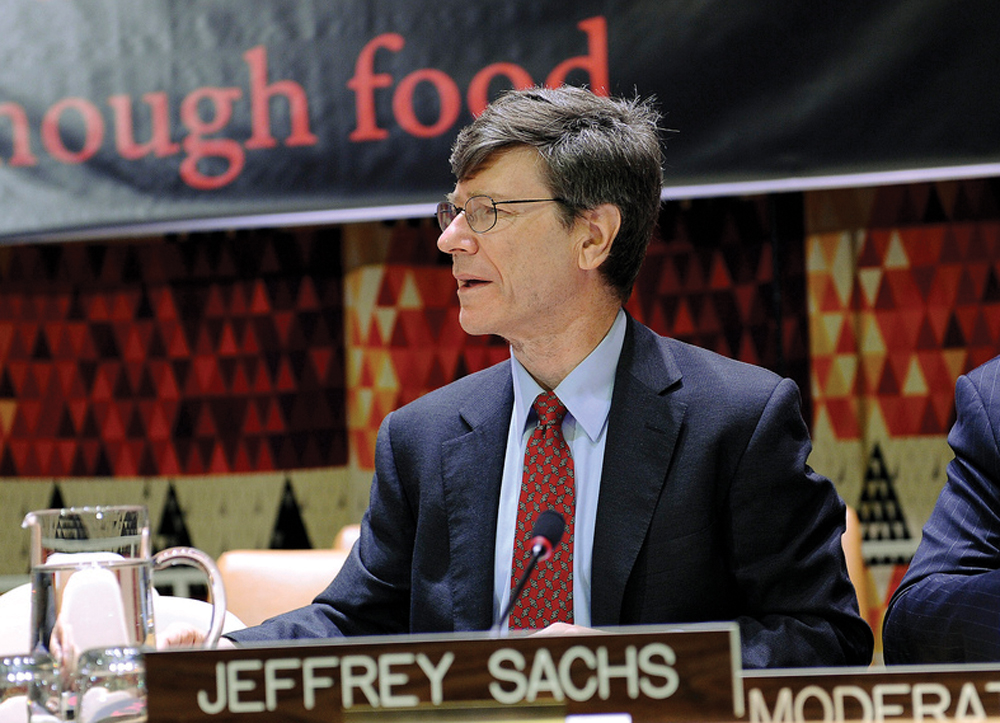 In 2002, Sachs moved from Harvard to Columbia University to serve as the director of the Earth Institute, which brings together some 850 full-time professionals across many disciplines. From scientists to experts in economics, public health, and law, the collective group collaborates to solve the problem of global sustainability — or, in more simple terms, they figure out how to provide productive and fulfilling lives for the planet’s more than 7 billion people without destroying the ecological system.

In 2016, after 14 years at the Earth Institute, Sachs moved into his current position as director of the Center for Sustainable Development at Columbia University. “It’s a much smaller center within the Earth Institute,” he says. “It’s mainly home to my activities in Africa, Latin America, and Asia regarding health, education, and environmental sustainability.”

The 63-year-old Sachs, who also serves as a senior adviser to the United Nations, has authored and edited numerous books, including three New York Times bestsellers, while his monthly columns appear in newspapers around the world. His fight against world poverty has enabled him to travel to more than 125 countries, and he vividly remembers when he first caught the travel bug — on a trip to the Soviet Union with his family when he was in the 10th grade.

“My eyes were opened and (I was) wide-eyed, trying to begin to understand how the world fit together,” he says. “That became my life passion, as well as, what is the right thing to do in order to try and create a society that works well? That’s still the question I ask myself today.”

Sachs’ insatiable curiosity about the workings of the world at large is especially honed in on all that’s happening in his hometown.

“I want to do anything I can to help,” he says. “I’ve talked to some of the key figures about wanting to feature Detroit in this global context as a city determined to make it in sustainable development — meaning a city that’s developing economically, achieving more inclusion, and is attendant to the natural environment. I think Detroit is really trying to do it right, and there’s a lot of hope right now that wasn’t there just a few years ago. It is very, very exciting, and all of us Detroiters have to contribute to it.”

Make no mistake, even though he left his home city as a teenager, Sachs is very proud to call himself a Detroiter, and he bristles at the notion he is anything but. In fact, he follows the city’s progress readily through media accounts. 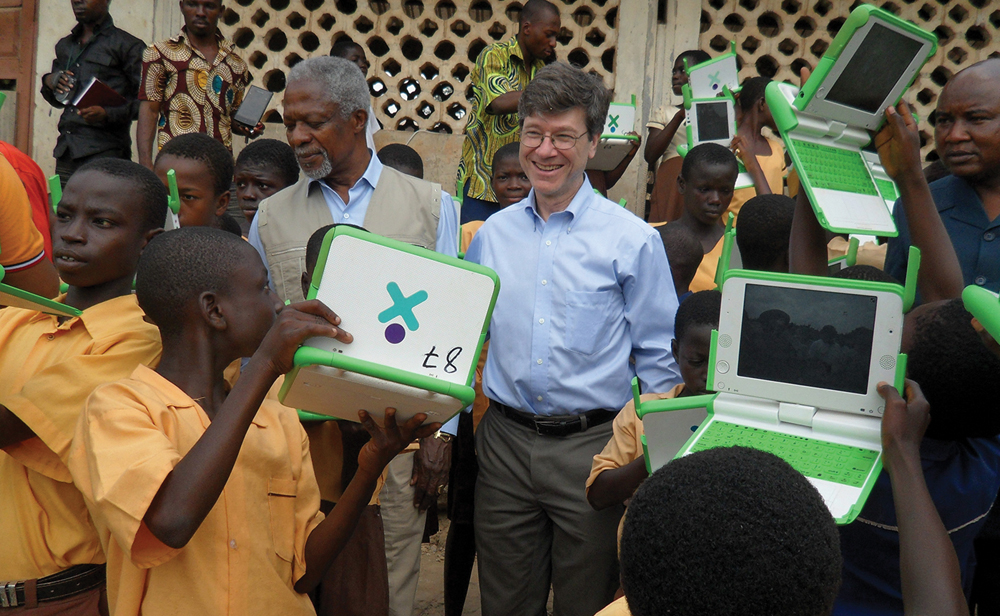 “I had a very, very good childhood and upbringing, and I was very fortunate (to grow up) in a stable community and in wonderful public schools. But also, I went off to the East Coast, and to an elite institution and the Ivy League and so forth. And, of course, I get a lot of not-so-pleasant, disparaging mail: ‘You elitist East Coast snob, you can’t understand what’s going on in Michigan, you fool,’ and so forth.”

Sachs briefly pauses, then presses ahead, his voice rising an octave or two: “And I say, ‘Oh yeah? You don’t know.’ But I know these neighborhoods. These are my neighborhoods. And it’s not a huge mystery. Understanding Michigan is crucial for me for understanding anything I’m doing. And understanding Detroit and all of its history, and what happened when I was growing up, and what’s happened since.

“For me, it’s the connection to reality. It’s a basic part of me that absolutely remains, and is a real privilege. So it’s not just that it was a nice place to grow up, but (it was) completely formative in ways that don’t go away. I really like that I grew up in Motown, literally in the Motown period. So, for me, it’s not about understanding Detroit or the Midwest. I am from there. That is me.”