Journalist David Maraniss has won three Pulitzer Prizes during a career at The Washington Post spanning almost 40 years. He’s also written or co-authored nearly a dozen books, and his most recent, Once In A Great City: A Detroit Story, focuses on the year 1963, which Maraniss asserts was pivotal in the city’s history, marking both the end of its mercurial rise and the beginning of a stunning half-century decline.

“(People of Detroit) were blinded by their own self-confidence,” says Maraniss, “whether it applies to the car industry not seeing Japan and Germany on the horizon, or not seeing the importance of keeping the heart of their industry in Detroit, and how important the city was to everything else. It was a star burning bright, but it was burning out, and people couldn’t see that.”

The story is personal for Maraniss because he’s a native Detroiter, born in 1949 at Women’s Hospital (now Hutzel).

“We lived in two or three different places in the city of Detroit,” he recalls. “The one that was most memorable to me was on the west side on Dexter, about a mile up from the Fisher YMCA at Grand River Avenue. We lived on the second floor of a flat. Those are my earliest childhood memories. I remember my older brother and sister, we’d sit out on the porch and they would quiz me on 1955 new automobiles as they drove down the street. I had to be able to name the Desotos, Buicks, Ramblers, and all the cars of that era.”

Other fond memories spill out as he reminisces: Hudson’s department store at Christmas, a love for Vernors ginger ale that lingers to this day, taking the Boblo Boat to the island amusement park, and his early years at Winterhalter Elementary School on Broadstreet Avenue.

“It was a very good school in a largely Jewish neighborhood that was transitioning then to African-American,” Maraniss says. “It was a very integrated school, terrific teachers. In first grade, we’d go from class to class in science, civics, reading, and different things. In first grade! My brother claims he went to school with one of the Supremes, and where we lived really wasn’t that far from where Motown started several years later, on West Grand Boulevard.”

By 1957, when Maraniss was 8 years old, his family left Detroit, ultimately settling in Madison, Wis., where his father continued his career in the newspaper business. “There were four children in our family and three of them were scholars,” he says. “I was kind of the dumb jock. I grew up like a lot of delusional young boys wanting to play shortstop for the Milwaukee Braves, and at a pretty early age I realized I wasn’t going anywhere in baseball. But I loved it.”

Once Maraniss accepted the fact that his future wasn’t going to be in professional sports, he began tagging along with his father to the office.

“I grew up in newspapers with my dad,” he says, “in the era of copy paper, glue, pneumatic tubes, cigarette stubs on the floor, the smell of ink, all that kind of stuff. I loved it. And this is not false modesty, but I’m terrible at everything else — so luckily, one thing I loved to do and I was good at was reporting and writing.”

A career path was forged once Maraniss enrolled at the University of Wisconsin, Madison, in the fall of 1967. At the time, the school was already gaining a reputation as one of the nation’s most radical campuses. Students marched to protest the Vietnam War, burned draft cards, and confronted Army recruiters on campus. Maraniss, who had just turned 18, eagerly covered it all for the school newspaper.

“In college you could tell what my interests were because I wrote about two things: high school sports and student protests,” he says. “It just evolved from there.”

Following graduation, Maraniss spent a few years in Madison as a local radio reporter, covering city hall and writing, producing, and anchoring a weekend broadcast. In 1975, he was hired by The Times in Trenton, N.J. “The paper had just been bought by The Washington Post and it was their farm club,” Maraniss says. “And so after two years in the minor leagues in Trenton, they called me up to The Post.” He was 26 years old.

In addition to the award-winning work he’s done for The Post, Maraniss’ book-writing has been prolific: The acclaimed They Marched Into Sunlight: War and Peace, Vietnam and America, October 1967 was the result of those long-ago days covering student protests at Wisconsin. Other books have focused on politicians — Barack Obama, Bill Clinton, Al Gore — and sports, including the 1960 Rome Olympics, Roberto Clemente, and Vince Lombardi.

“I’m not very good at writing about things I don’t care about,” Maraniss says, “and I feel incredibly lucky that I’ve been able to find enough subjects I’m passionate about and get them published.”

It’s fair to say his current book about his home city kind of snuck up on him. He was watching the 2011 Super Bowl between his beloved Packers and the Pittsburgh Steelers when that iconic Chrysler spot starring Eminem popped onto the screen.

“It moved me to tears,” he says. “I wasn’t expecting it. It just washed over me. It had all the different elements — the Joe Louis fist, the Diego Rivera murals, the Fox Theatre, a black gospel choir, Eminem’s back beat … all of that just really hit me deeply. And so it got me thinking about why that happened. Obviously they were just trying to sell Chryslers, but it hit me at a different level and it was because of my sort of primordial memories of Detroit. 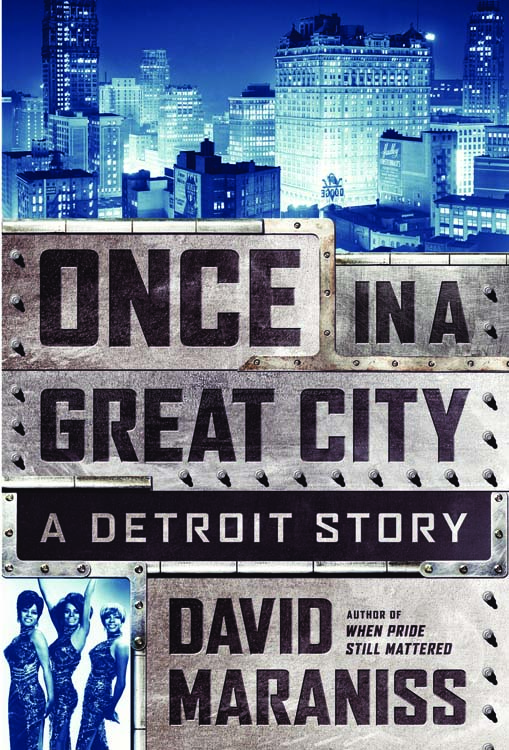 “And then I started thinking about how important Detroit was — not just to me, but (to) the whole country. Then I thought, what can I do? I’m a writer, I can write about it. And that’s what took me on the path to writing the book.”

Maraniss began his research by visiting the city in 2011.

“I could sit in the middle of Woodward Avenue and read War and Peace and not get hit by a car,” he says. “It seemed so desolate. But in going back there several times recently, I’ve found more energy every time in particular parts of town, from downtown to the Midtown area. People (are) moving back into the city, bringing different sorts of energy. It’s not as much an automobile town as it was back in the day — which is good, to have more diversity in that sense.”

As for the prospects for its return to the greatness it once enjoyed?

“I love the people of Detroit,” Maraniss says. “That’s a sort of sweeping statement and I don’t mean to stereotype, but I’ve always enjoyed the spirit and energy of people in Detroit, and I think right now they have things to root for. There are still huge problems, and until the people who feel forgotten are part of the comeback it can’t be a full comeback. But I do see a revival going on now, so I’m optimistic about it.”

Maraniss splits his time these days between his homes in Washington, D.C., and Madison. But it’s clear the little boy who once watched the traffic go by from the porch of that Dexter Avenue flat has never let go of that part of his life.

“Detroit is a deep part of my sensibility,” he says, “and I think that has to do with issues of race. My family was always very progressive on racial issues and in my earliest years, going to an integrated school and having black friends, it influenced our whole family in an interesting way. I think, also, (that) Detroit shaped my feelings about underdogs. Detroit has always had a sort of working class underdog sensibility, and I feel very strongly attached to that. I’ve always rooted for the Midwest against the glamour and glitter of New York and L.A., and I think Detroit is part of that sensibility, as well. So it has affected me in all of those deeper ways.”