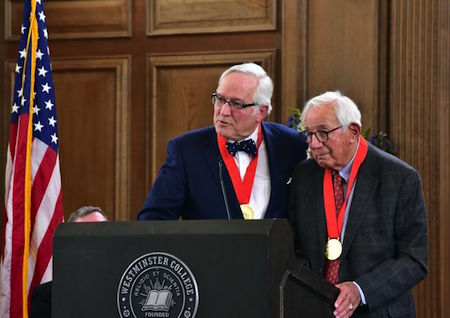 Cornerstone Schools has announced that its co-founder and former CEO William Clark Durant III was recently inducted into the Association of Churchill Fellows during the 2018 Churchill Fellows Weekend at the National Churchill Museum at Westminster College in Fulton, Missouri. Additionally, four other leaders were inducted, including Bloomfield Hills’ Mort Harris, co-founder of Detroit’s American Axle and Manufacturing Holdings Inc. and a World War II veteran.

“World War II was about a relentless fight for freedom against a well-armed enemy,” says Harris, who flew 33 combat missions, was shot down twice, and is pictured with fellow pilots in Life Magazine as a part of the flying squadron which first bombed Berlin. “At the outset, a successful outcome was uncertain. Churchill’s voice gave us hope. His courage was contagious. I am highly honored to be named a Churchill Fellow and, as a native Detroiter, it was a joy to have two Detroit students travel to Fulton with me and a gift to share my World War II experiences with them.”

Durant serves as president of the New Common School Foundation and is co-founder of Cornerstone Schools in Detroit, which serves more than 3,400 students. From 1994-1999, he held the role of president of the Michigan State Board of Education and now serves on the Coalition for the Future of All Detroit School Children.

“I am honored beyond measure to have been inducted into the Society of Churchill Fellows at Westminster College and the National Churchill Museum, alongside my 98-year-old dear friend Mort Harris, a genuine World War II Air Force pilot hero in the European theatre,” says Durant.

Durant and Harris were accompanied to the annual event by Gevon Clemons, an 11th grader, and DaLayna Mitchell, a 12th grader, both from Detroit’s Cornerstone Health and Technology High School. Each year at the event, a national expert on Churchill gives the Enid and R. Crosby Kemper Lecture, and new Churchill Fellows are inducted. Jared Davis, Cornerstone Health and Technlogy principal, and Ricardo Martin, Washington-Parks Academy principal, also attended.

“The two students and two principals who accompanied me from the Cornerstone schools had a rare treat to learn of the historical importance and current relevance of Winston Churchill at the very location of his historic address in 1946, given in the presence of President Harry S. Truman,” says Durant. “They also learned firsthand from the Hon. Ron Dermer, Israel’s Ambassador to the United States and a new Churchill Fellow, of the great support given by Churchill to the Jewish people in their struggle to create the state of Israel and in the continuing battle against anti-Semitism.”

Founded in 1969, the Association of Churchill Fellows is an honorary society of people dedicated to the development and use of the National Churchill Museum.  Winston Churchill gave his Iron Curtain speech in 1949 at Westminster College, starting the Cold War with the then-Soviet Union.

This year’s lecture was given by his Excellency Ron Dermer, Israeli Ambassador to the United States, on the topic of Churchill and Israel in the church of St. Mary the Virgin, Aldermanbury, a 17th-century Christopher Wren church in London that was bombed in 1940 during the German blitzkrieg at the start of World War II and re-dedicated in 1969 at Westminster College in Missouri to commemorate the 20th anniversary of Churchill’s now-famous speech.

“My experience during the Churchill Fellows Weekend was truly amazing,” says Mitchell. “The knowledge I gained on this trip will stay with me beyond high school. Learning about Winston Churchill has inspired me to work harder, help motivate others, and make a difference in the world. Israeli Ambassador Dermer is a remarkable individual and an incredible speaker. I was honored to hear his lecture, as well as meet a World War II veteran, Mr. Mort Harris, who shared with me details of his journey throughout the war.”

Alongside Durant, Dermer, and Harris, Sam Fox, former U.S. Ambassador to Belgium, St. Louis business leader, and philanthropist; and Neal F. Perryman, a Westminster College alumnus and a member of the Lewis-Rice law firm in St. Louis, also were recognized.