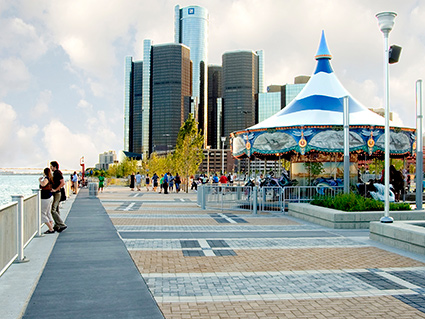 The Detroit RiverFront Conservancy and the City of Detroit Planning Department announced today that Chicago-based Skidmore, Owings & Merrill has been selected to develop a comprehensive plan that will lead to new investment and development within the East Riverfront District.

The plan will evaluate various conditions, including; building stock, land-use patterns, major historic and cultural assets, and transportation operations on the corridor.  The final plan will provide a vision for future East Riverfront District improvements that builds on the success the Conservancy helped foster over the past decade.

The plan will also address the lack of a direct connection for vehicles and pedestrians to the East Riverfront area from I-375 while analyzing stakeholder needs, vehicular circulation, connections to transit options and non-motorized travel.

The boundaries of the East Riverfront District are St. Antoine to the west, East Grand Boulevard to the east, Larned Street to the north and the Detroit River to the south.  The East Riverfront is being transformed from a blighted, industrial area into one of Detroit’s most exciting, emerging neighborhoods.

Additionally, Mohsen Mostafavi, dean of the Harvard University Graduate School of Design will lead a Creative Detroit Think Tank and HR&A Advisors of New York will bring its industry-leading real estate, economic development and energy efficiency expertise to the project.  Internationally renowned landscape architect, Michel Desvigne, recognized for his contemporary expertise in the design and construction of gardens and public spaces, will join SOM in working on the East Riverfront District project as well.

“The selection process reflects our aspirations for promoting the Detroit waterfront as an international treasure,” says Maurice Cox, director of the City of Detroit Planning and Development Department.  “We see no better signal of this than assembling an accomplished team representing local, national and international talent.”

Skidmore, Owings & Merrill is one of six leading design firms and development experts that provided formal presentations in late January to a selection panel of representatives from the Conservancy, the City of Detroit and local and national architectural design and planning experts. The sessions were open to the public and drew more than 300 people over two days.

Skidmore, Owings & Merrill is also one of the largest and most influential architecture, interior design, engineering, and urban planning firms in the world.  Founded in 1936, it has completed more than 10,000 projects across 50-plus countries and has earned more than 1,700 awards.  It is the only practice to have twice been named ‘Firm of the Year’ by the American Institute of Architects.

The firm plans on continuing the Conservancy’s practice of ensuring residents have input on what the riverfront will look like in the future. Before the plan is completed in August, five community meetings will provide the public with the opportunity to engage in the planning process through a series of East Riverfront site tours to uncover important informal landmarks, areas for improvement and relevant stories of history and culture.

“This project is integrally important to the continued evolution of the Detroit Riverfront,” says William Smith, CFO of the Detroit RiverFront Conservancy.  “And, we’re looking forward to hearing what the community has to say.  The community feedback we’ve received in the past helped shape what the riverfront is today.  What we learn throughout this process now will shape what the riverfront will become in the future.”

The first public meeting for East Riverfront District plan will take place on from 6 to 8 p.m. Tuesday at the Outdoor Adventure Center, which is located at 1801 Atwater St. in Detroit. The meeting is open to the public, however, space is limited. Register by visiting the Conservancy’s website at detroitriverfront.org.