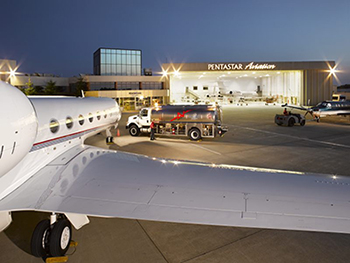 Pentastar Aviation, an aviation services company located at Oakland County International Airport in Waterford Township, has been rated among the top tier of fixed base operator businesses in the Western Hemisphere, according to the 2016 Survey of FBO Services conducted by Aviation International News.

Unlike previous surveys that only used data from the previous year, the 2016 version used ranking data spanning from 2013 to the present. Future surveys will allow respondents to provide feedback on fixed base operators throughout the year, not just  during a designated survey window. According to Aviation International News, “this new survey format provides both a more compelling way for business aircraft operators to make their preferences known and a more relevant assessment of service providers.”

“We continue to increase our market share on a highly competitive field and our commitment to deliver an industry-leading customer remains unwavering,” says Greg Schmidt, president and CEO of Pentastar Aviation. “This honor is a testament to our hardworking team.”

Pentastar, owned by Edsel B. Ford II, was established in 1964 and provides services to aviation companies such as aircraft management and advisory services. In February, the company began offering passengers the ability to connect to the Internet or their wireless networks during flights on its Gulfstream and Hawker aircraft.