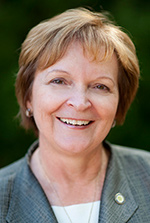 Stephanie W. Bergeron, president and CEO of Walsh College since January 2007, and the first woman to lead the college, has announced her retirement.

Bergeron will remain in her leadership position until a national search process for a new president concludes in early 2017.

“Her strategic vision and outlook have been critical in providing quality business and information technology programs valued by students and employers alike,” says Edward T. Gwilt, chair of the school’s board of trustees.

Bergeron has presided over a host of major initiatives during her Walsh tenure, including the Driving Aspirations campaign that raised more than $5 million for scholarships; the 2009-10 Take Charge skills-training workshop program for displaced workers, offered during the recession; accreditation by the Accreditation Council for Business Schools and Programs (2010); the Walsh College LaunchPad for aspiring student and alumni entrepreneurs (2010); Entrepreneur-YOU (2012), a program providing local women with tools and knowledge for entrepreneurship; the award-winning Finance Lab (2013); and the $15 million addition and renovation of the Troy campus (2016).

She later became founder, president, and chief executive officer of Bluepoint Partners, a consulting company providing advice on financial and capital structure. Bergeron has been a member of the Walsh College board of trustees since 1996.

Bergeron is a Henry Ford Health System trustee and chairs its Finance and Planning Committee. She is the chair, board of directors, of the Michigan Association of Certified Public Accountants. Her board memberships include the Detroit Regional Chamber, the Detroit Economic Club, and Sun Communities, Inc. Bergeron is also a member of the executive committee, Michigan Independent Colleges and Universities.

Bergeron received DBusiness’ 2013 “Powered by Women” award. In 2011, she received an honorary Associate in Arts and Sciences degree from Schoolcraft College. She was awarded Pillar of Vibrancy in Education honors from The Community House, Birmingham in 2014. Bergeron received the Oakland County “Quality People, Quality County” award for career achievement and community contributions in 2015.