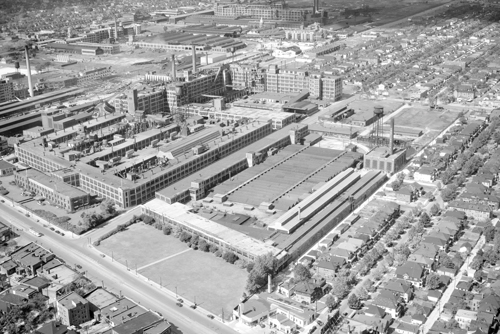 At the bottom of the Great Depression, Continental Motors Co. was pinched by falling sales as its customers, an array of independent automobile manufacturers, went out of business. To keep its East Jefferson Avenue factory in Detroit and operations in Muskegon humming, Continental went into takeover mode.

The result was the short-lived Continental Beacon, Flyer, and Ace. The modestly priced cars had started life in 1931 under the De Vaux name. Automotive pioneer Norman De Vaux, who had organized Chevrolet Motor Co. of California at the behest of General Motors’ founder Billy Durant, decided to enter the market with his own products.

He leased a Hayes body plant in Grand Rapids and set about making an immediate failure. Continental bought the name and assets, made a few refinements, and marketed the cars under the De Vaux Continental label. They were sturdy and well-equipped, and a coupe averaged 66 mph for 1,000 miles in an endurance run. In 1933, even after dropping the De Vaux name, sales of the Beacon, Flyer, and Ace amounted to 3,310 units for the year. Production continued at a trickle in 1934, until the effort was abandoned.

At the same time, Continental was rescuing Detroit Industrial Vehicle Co., the manufacturer of house-to-house delivery trucks, in an arrangement called Continental-Divco. It lasted four years and enabled Divco to sell milk trucks and other delivery vehicles for several more decades.

What allowed Continental to survive wasn’t its ability to build cars; rather, the company’s success derived from manufacturing internal-combustion engines. Two-, four-, and six-cylinder power plants proliferated in the company catalog. Continental engines were meant for the mainstream, not the speedway, and durability was its hallmark.

By the late 1920s, about 4 million cars had Continental engines. Purchasing a ready-to-run engine made it possible for makers of assembled cars — companies that made few parts on their own — to get to market without the capital outlay and complication of operating foundries to cast engine blocks.

Customers included classic marques like Locomobile, Auburn, Peerless, and Ruxton. There were also familiar names like Willys, Reo, Graham-Paige, and Kaiser-Frazer. And Hudson Motor Car Co. popularized the six-cylinder engine in the medium-price field, thanks to Continental.

The company was launched by Chicago engineering student Ross Judson, who reverse-engineered a Mercedes engine. Backed by his brother-in-law, A.W. Tobin, he displayed the prototype engine at the 1903 Chicago Auto Show and founded Autocar Equipment Co. A flood of orders prompted the construction of a 16,000-square-foot factory in Muskegon, where city leaders sought to diversify from the lumber industry. By the end of 1905, the company would change its name to Continental Motor and Manufacturing.

With so many customers in Detroit, it soon made sense to open a plant in the city. “Add to Detroit industrial establishments … another factory probably largest in its line,” said the Detroit Free Press of the Albert Kahn-designed facility, which opened in 1912 next door to Hudson’s operation. The smokestack with Continental’s name in block letters was a long-standing icon.

Although Continental also provided engines for everything from tractors to tanks, its future was in the air. The development of the Type O aviation engine opened a new line of revenue. Once the Piper Cub light aircraft took off with the innovative A-50 engine, Continental became established as the dominant engine manufacturer for small airplanes.

Its last automotive account, with Checker, ended in 1963. Continental is now part of Aviation Industry Corp. of China, based in Mobile, Ala. But its roots remain in the Great Lakes.