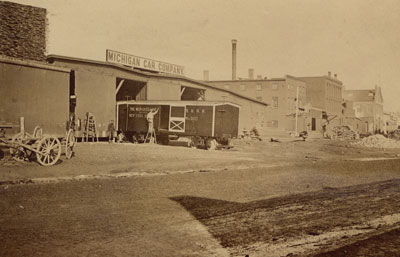 A few months after leaving school in Dearborn, Henry Ford found work with Michigan’s largest industrial enterprise at $1.10 per day. Attracted to Michigan Car Co.’s workshops, Ford found an assembly process that presaged his automotive innovations. But he was fired after six days, and rarely spoke of the misadventure.

Located on Detroit’s west side, at the junction of the Grand Trunk and Michigan Central railroads, Michigan Car Co. was formed in 1864 by John Newberry and James McMillan. They weren’t the city’s first to build railroad cars — Detroit Car and Manufacturing Co. had started up in 1853 — but both men had railroad experience, family connections, and good timing. In 1865, Congressional Republicans, freed of Southern Democrats’ opposition during the Civil War, raised tariffs that served to cut imports from England and Germany. What’s more, westward expansion was driving new demand.

Michigan Car Co. built boxcars and flatbeds, hoppers for ore and coal, tankers for oil, and, beginning in 1866, refrigerated cars (the latter was the brainchild of Detroiter William Davis). The manufacturing process started with iron wheels and axles set in trucks, or bogies, upon which carpenters would frame and painters would paint up to 40 cars per day. Production in 1890 reached some 10,000 cars.

Vertical integration was a necessity, so the partners launched Detroit Car Wheel Co., making 425 wheels and 150 tons of castings daily, while Detroit Baugh Steam Forge Co. provided axles, wrought iron, and other forgings such as links and pins. Taking it further, Detroit Pipe and Foundry Co. made 20,000 tons of pipe for the St. Clair Tunnel, which allowed trains to run beneath the river between Port Huron and Sarnia, Ontario.

Detroit in History and Commerce reported in 1891 that, “The aggregate output of the four abovementioned companies would be close to $6 million per annum, and the total number of men employed would be about 3,000.”

Yet there was room for upstarts. Charles Freer and Frank Hecker, veterans of the Eel River Railroad in Logansport, Ind., came to Detroit and started Peninsular Car Co. on Jan. 1, 1880. The operation covered 40 acres on the north side of Ferry Street in today’s Midtown district, with 1,500 employees building 9,000 cars annually. The production was valued at $4 million.

While the factories churned, the railroad barons diversified. McMillan became involved in shipping, banking, and public utilities. Freer’s financial interests included Parke, Davis & Co. and the Peoples State Bank; he also traveled the world collecting art. McMillan got into politics, funding the Detroit Parks Commission and pushing for Belle Isle to become a city park. Ultimately, he served in the U.S. Senate from 1889 until his death in 1902.

A year before the economic depression, a merger formed the Michigan-Peninsular Car Co. Seven years later, American Car and Foundry Co. absorbed it and improved the Detroit operation. Meantime, McMillan devoted himself to his senatorial duties and, ever the parks commissioner, planned a redesign of the National Mall in Washington, D.C. (via the McMillan Commission).

Freer, who would live until 1919, donated his $7 million art collection to the Smithsonian Institution, and added $1 million more to build the Freer Gallery. Located on the south side of the Mall, the gallery is open 364 days a year, while a 25-acre park in northwestern Washington, D.C. commemorates McMillan’s public service. In the end, the Detroit railroad men left their mark on not one, but two, great cities. db