Siobhán Cronin is best known these days as a classically trained violinist who regularly performs around the world with internationally celebrated artists and touring shows. Her very first steps on the path she forged toward her current profession — and passion — were taken as far back as she can remember.

“My parents liked classical music and opera, and I grew up listening to that,” Cronin recalls. “We had a piano in the house and my mom tells me when I was like 2 and could climb up, I was banging on the piano.

“I grew up kind of close to where the Somerset Collection is, kind of the edge of Troy and Birmingham, on Brandywyne Drive,” she says. “We were always kind of the weird artsy, musical, European family.

“My dad was a psychotherapist — he passed when I was 13 — and Mom’s from Europe. She ran a successful high-fashion women’s retail store in downtown Birmingham for a long time. She closed it just before I was born and, shortly after that, (she) got into marketing and opened an advertising and marketing firm.”

Cronin’s earliest school years were spent at Brookfield Academy, a Montessori school in Troy. “And then my parents were trying to get me into Cranbrook Schools in Bloomfield Hills, and you have to take all these tests and get on the waiting list,” she says.

That’s when the course of Cronin’s life dramatically changed.

“There was a little blonde girl who was playing violin and she was taking lessons, and just that exposure was enough,” she says of her start at Cranbrook in the second grade. “I was like, I want to play that. And my mom was saying, ‘Oh God, here we go, you’re already taking piano lessons. Now, you want a violin.’ So, yeah, I got a violin. I think I was 6 or 7 at the time.”

Cronin’s obsession with the instrument began immediately. Her mother, Annemarie, confirms that some days, her daughter practiced for as many as 13 hours — but not necessarily on the conventional, staid pieces Cranbrook’s strings program was focused on.

“I remember my parents bought me this big amplifier when I finally figured out how to use a pickup on my violin,” Cronin says, laughing at the memory. “I’d go out in the backyard and practice for hours with this amp, and the neighbors would be screaming, ‘Shut up, we’re so sick of you practicing. Go inside or play in the street, like a normal kid.’ But I never really wanted to go out and play in the street like the other kids.”

By the time Cronin graduated from Cranbrook and enrolled at the School of Music, Theatre, and Dance at the University of Michigan in Ann Arbor, she’d already stretched the versatility of her instrument far beyond its traditional range.

“I always had an interest in other types of music, and I always felt like I would get to a point of learning a piece and think, Wait, I feel like there’s something else I want to do with this, and (I’d) experiment with it,” she says. “I remember even before all the good music technology, I would sit in my room and make photocopies of Beethoven and Mozart piano pieces and match them up with Garage Band rock, and so on.”

At U-M, Cronin was intent on focusing on a full-time career as a musician. 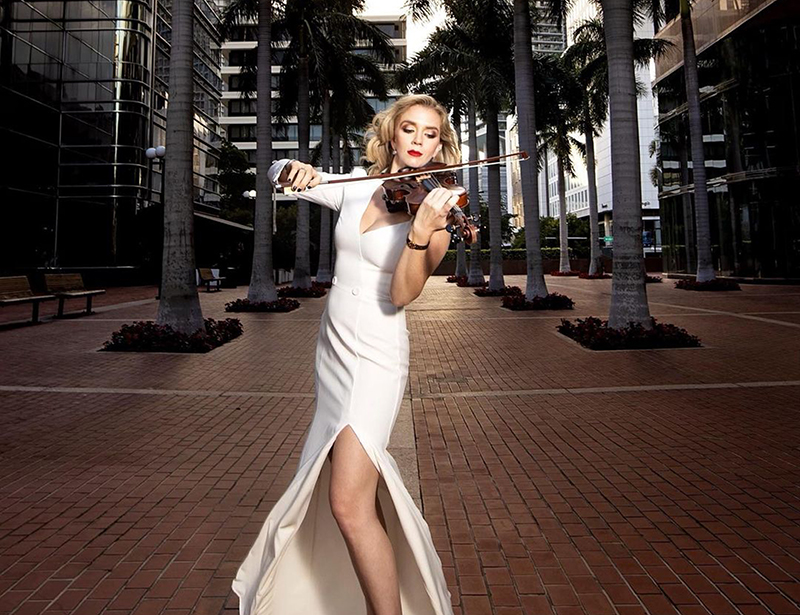 “Everyone was telling me it was going to be impossible to have a career in music, so I planned on going to law school,” she says. “I remember an adviser saying, ‘Economics is a great major to help you perform well on the LSAT,’ so I did that and loved it. And I thought, All right, this is it, I’m going to do both music and economics, and at the end of it all, I’m going to leave this music thing behind and apply to law school.”

During her pursuit of seemingly incongruous undergraduate dual degrees in violin performance and economics, Cronin got the first big break of her life — a call to perform with the Trans-Siberian Orchestra, the progressive rock band that’s also one of the top acts in the world (since its founding 25 years ago, TSO has played to more than 100 million people in nearly 100 cities).

“I played a gig with somebody that was contracting the strings for (TSO), and I guess I had kind of the look and the charisma and energy of what they were look-ing for,” she says. “They do this big kind of immersive concert — some original stuff with metal guitars and a big drum kit, but they also incorporate classical things like their own remixes of Beethoven and Mozart, but mixed with shreddy metal guitars and bass.

“I was so amazed when I stepped on stage and I’m like, Oh my God, there’s 30,000 people coming to the show. I got hired to do a whole bunch of shows, and ended up getting the position of string leader for a lot of the Midwestern and East Coast dates.”

It was exciting stuff for Cronin, but not so much for her music professors and fellow student musicians at U-M. “I was getting in trouble with the orchestra because I was skipping all the time and missing rehearsals,” she laughs.

The violinist seemed to be well on her way to the career she’d dreamed of, but after graduation she was still compelled to hedge her bet.

“I did take some job interviews,” she allows. “I remember I was flown to New York City to interview for Morgan Stanley, and I felt physically ill when I went in for it. It’s not that anyone was mean or anything. Everyone was very nice, and it was a great interview, but I just felt something (didn’t) feel right about it.”

During the summer following graduation, Cronin did an internship at a prominent law firm in Chicago. “They offered me a full-time job,” she says. “They told me, ‘If you don’t want to go to law school right away, stay, you can be a project assistant and work with the attorneys and then apply to law school.’ ”

Cronin was on the verge of accepting the position when she got another fateful call — this one from the U-M School of Music.

“They said, ‘If you want to come back and continue music, we’ll give you a fellowship.’ Basically, it was a full scholarship for a two-year master’s degree, and with a beautiful instrument to play. I remember I called my mom, and she was like, go for the music, you can always go back for those other kinds of jobs.”

Cronin earned her master’s degree in violin and viola performance — “the viola is what’s in between a violin and a cello,” she explains. Finally, feeling secure enough to wholly commit to music as a career, she jumped in her car and, with only a few hundred dollars to her name, she drove directly to Miami.

“It was blowing up,” she asserts. “Art Basel was coming to Miami. There was a mix of Latin music. There was a big DJ scene — not a ton of rock music, actually, but a lot of big shows and a lot of events. I had done a lot of piecemeal private stuff around Detroit, and I figured if there’s a place where I can do what I want and have absolutely no judgment, Miami is it, because you can try anything and there will be an audience for it.”

Once the word got around that Cronin was in town, it didn’t take long before she was sought after. “Within a couple of weeks, people would find me and ask me to play different events, and then I got asked to play in the Miami Symphony,” she says. “I got asked to play with DJs and just about anything that required strong classical chops, but (I was) also able to do electronic stuff.”

In early 2017, several years after Cronin settled in Miami, she got word that Starset, another well-known rock/metal band, was looking for a touring violinist. She was immediately intrigued.

“As much as I love the big shows, I always wanted to play with somebody that was a little bit more close-knit, and at the time that’s what it was,” Cronin explains. “It was a four-piece rock band, up-and-coming, and they were kind of blowing up but still playing mid-sized venues. I was like, Sure, I’ll totally do this, and I jumped on board.”

She’s been with Starset ever since. In September 2020 she married Brock Richards, a guitarist with the band. Nowadays, when she’s not performing in venues around the world with Starset, she keeps adding names to the list of luminaries she’s appeared with — from Andrea Bocelli and Earth, Wind & Fire to Rod Stewart, Josh Groban, and Michael Bublé. And then there are her more obscure, serendipitous contributions that clearly captivate Cronin as much as those big shows. For instance, several years ago she was asked to “record some stems” for an unnamed project one of her colleagues in Miami was working on.

“And a while later,” she says, giggling, “he came back and said, ‘Oh, hey, I put you in the credits for the The Queen’s Gambit.’ I was like, What? It became a big hit on Netflix, but I had no idea that what I recorded was going to turn into that, so it was super cool.”

In addition to her busy schedule, Cronin stays connected to her Detroit roots by squeezing in the time to write and perform the original music, as well as the commercial spots, for the radio show her mother, Annemarie, hosts on WJR-AM in Detroit.

When she’s available, Cronin even flies in or is available via Skype to co-host the station’s Cronin Medical Hour on Thursday evenings with her mom, sharing with the listeners the attitude and perspective she’s endorsed since she was a little girl.

“I feel like my passion in life is to prove to people that you can do anything,” she says, emphatically. “Life is just too short, and you have to be willing to take risks. And that’s really, really hard because you have to listen to a lot of people who will tell you it’s not possible or that you’re going to fail, and that applies to everything, not just music. But if you can do something really well, and you truly believe in doing it, you just kind of have to find your passion.

“For a long time,” she continues, “I tried to pretend I was going to be an orchestra player and I would (work hard) over those excerpts and hope my teacher would give me the gold star and say, ‘Good job.’ ”

Here, Cronin pauses for a beat. “But I was constantly breaking the rules, and it worked out.”