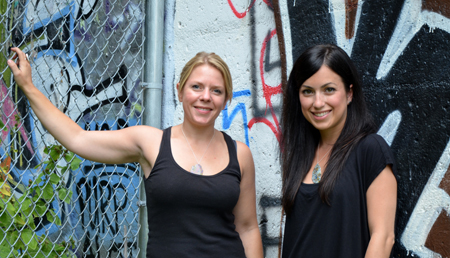 Detroiters Amy Peterson and Diana Russell are working to transform pieces of graffiti into hope for dozens of economically disadvantaged women in the city.

They are the co-founders of Rebel Nell, a jewelry-making venture that provides training and guidance to women to repurpose fragments of graffiti into jewelry. Ultimately, the organization provides a first step for women to gain confidence and knowledge in the business world.

“It is important to not focus on where these women came from or how they ended up out on the streets. It’s more important that we help them imagine a future and help them get a second chance at life,” Russell says.

With an abundance of graffiti across Detroit, “chips” of paint that have fallen off of walls due to gravity or damage from natural causes is collected and sorted. Peterson stresses the organization does not take graffiti from actual walls. Rebel Nell turns the scrap pieces of layered paint into unique works of wearable art such as earrings, pendants, rings, and cufflinks. Prices range from $65-$175.

“The graffiti, just like Detroit, looks a little rough on the surface but is made up of beautiful layers just like the intricate layers of people, ideas, and history that make up the city,” Peterson says.

Rebel Nell was formed in April and has set up operations at Ponyride, a company that rents space to artists and other creative entrepreneurs in Detroit’s Corktown district. To help fund the operation, Peterson and Russell recently kicked off an Indiegogo.com crowdfunding campaign with a goal of raising $25,000. The jewelry will be available at stores and local festivals, including Saturday at Dally in the Alley, a street fair in Detroit’s Midtown district.

“The more revenue Rebel Nell generates by selling this product, the more jobs we will create for Detroit’s underprivileged women,” Peterson says. The company is working with COTS and Alternatives for Girls to identify women ready to transition to a new phase in their lives.

According to a 2011 Homeless Action Network of Detroit (HAND) report, 85 percent of Detroit’s homeless were unemployed, and 79 percent of them were women. Peterson says Rebel Nell is a first step to helping disadvantaged women who are often homeless, and have little if any support system. In addition to the on-the-job training, the women learn other life management skills.