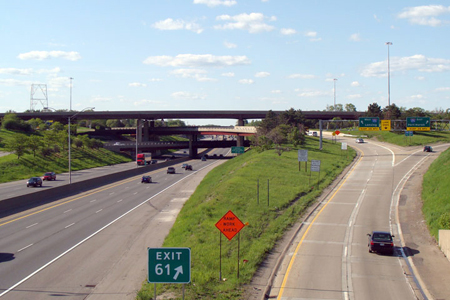 The Michigan Department of Transportation plans to reconstruct and expand I-75 from Eight Mile to South Boulevard near M-59 at an estimated cost of $851 million, DBusiness has learned. The 18-mile stretch of freeway, which is home to 65 percent of the largest auto suppliers in the state, would take five years to complete. The freeway will remain open during construction.

“The I-75 reconstruction is one of the highest priority projects we are working on,” says Rob Morosi, a MDOT spokesman. “It will entail replacing 47 bridges, adding park-and-ride lots, pavement reconstruction, utility upgrades, a new drainage system, and other features. We don’t have an exact date to start construction, but we definitely are working on this project.”

Where there are three lanes in either direction of the freeway, the plan is to add a fourth lane. Once completed, the left-hand lanes will be confined to high-occupancy vehicles, also called HOV lanes, from 7-9 a.m. and 4-6 p.m. on weekdays. In addition, the shared ramp onto I-75 serving eastbound and westbound traffic from I-696 will be elevated so that it won’t impact northbound traffic on I-75 exiting to 11 Mile Road, often a major bottleneck during morning and evening rush hours.

“I am delighted with the decision, especially as it will benefit businesses, residents, and commuters,” says Oakland County Executive L. Brooks Patterson. “It’s part of Automation Alley, and with the improvements and the widening, we can expect more investment in the area which will be critical to economic growth in Michigan.”

MDOT estimates the stretch of I-75 handles 18.5 million tons of cargo each year, valued at $26 billion. Morosi says once a so-called owner’s rep contract has been finalized, design and other planning activities will begin in earnest. MDOT is currently working to secure various approvals for the project, and will bid out two separate construction contracts — one for the work from Eight Mile to 13 Mile, and the other from 13 Mile to South Boulevard.

The stretch of freeway was originally constructed in two phases, 1957 and 1973. Roughly 98 percent of the funds for the project will cover reconstruction, with the remaining portion dedicated to adding lanes. While MDOT typically builds temporary lanes to accommodate traffic during major reconstruction, the I-75 project will entail the addition of new lanes from the outset. “We promote safety, mobility, and commerce,” Morosi says. “And this fits the bill perfectly.”

While Patterson anticipates there will be some protesters who will cite the need to offer more rapid transit offerings, he notes nothing lasts forever. “This project is just too important to our global competiveness,” he says. “We can highlight this as another asset to encourage businesses and residents to relocate to Oakland County and Michigan, and for current businesses to expand here. I for one cannot wait until this is completed.”