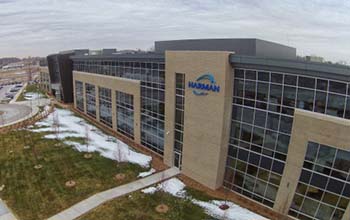 “The opening of our new North American automotive headquarters signifies Harman’s drive to accelerate innovation in the automotive (industry), and also the exciting future that metro Detroit is forging as an epicenter of the connected car and autonomous driving,” said Dinesh Paliwal, chairman, president, and CEO of Connecticut-based Harman.

Paliwal says the facility, located on 400 acres at the Haggerty Corridor Corporate Park on Haggerty Road and the M-5 freeway, is home to 1,000 employees, consolidating employees from eight different locations.

The building features several vehicle labs, a pilot factory, and audio testing chambers ranging from listening rooms to a cinema-quality surround sound theater. Employee amenities include a fitness center, cafeteria, and an outdoor deck and patio. 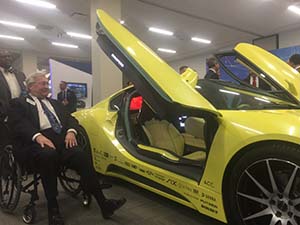 Paliwal says Harman hopes to play a role in the future of the automotive industry as it relates to the collaboration needed to develop autonomous and connected vehicles.

“No one company can deliver the connected car experience,” he says. Already, Harman has partnered with Google, Microsoft, Adobe, and Dell on a variety of connected-car projects.

Phil Eyler, executive vice president of Harman, says the company chose Novi for its North American headquarters to “tap into decades of deep automotive experience” that the metro Detroit workforce has to offer. About 90 percent of the employees at the headquarters are engineers.

Harman’s connected-car technologies include a system called the Life-enhancing Vehicular Solution that incorporates a variety of autonomous driving and smartphone integration technologies, transforming vehicles into a combination chauffeur and personal assistant.

Tom Rivers, vice president of marketing for Harman, said consumers can expect to see some of the business integration aspects of the Life-enhancing Vehicular Solution suite in vehicles within 18 months.

Harman executives also demonstrated a virtual test drive in which 360 degree cameras detected oncoming traffic in a blind spot, scheduled a meeting from a supervisor’s text message, and dialed into a Skype call, all without the driver’s help.

Harman employs about 28,000 people worldwide and has manufactured car audio systems since 1956.