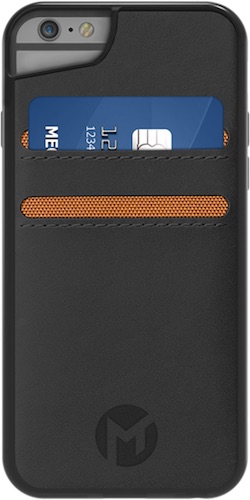 Mega Tiny Corp., a Birmingham-based cell phone case company, is in the early stages of launching the Anti-Gravity Case 2, an updated version of its nano-suction Anti-Gravity Case, which is outfitted with suction cups that stick to almost any smooth surface.

The Anti-Gravity Case 2 will feature more nano-suction surface area as well as a series of new swappable back plates that allow users to add a leather wallet, a shatterproof mirror, or a bottle opener to the back of the case.

The phone case, which will be made available for the iPhone 7, 7-plus, 6s, 6s-plus, 6, and 6-plus, will also come with four additional back plates (gold, rose gold, space gray, and black) to help protect the phone when a functional backing is not in use.

Carl Winans, founder of Mega Tiny, says both cases are suited for multiple scenarios, including hands-free photos, streaming Netflix, Skyping, recording video blogs, live streaming on Facebook, working out at the gym, cooking in a kitchen, and more.

This week, the company is launching a 30-day crowdfunding campaign on IndieGoGo with a goal of $20,000. A Kickstarter campaign for the original version of the Anti-Gravity Case that launched in April 2015 raised more than $160,000 in 30 days.

“We are excited to launch the IndieGoGo campaign for the Anti-Gravity Case 2 and grant early access and discounts to our passionate fans,” Winans says. “We enjoy engaging in conversation with our supporters to explore additional functionality for the case based on their experiences.”

More than 30,000 units of the original case, which listed for $39.99, were sold. Winans says the Anti-Gravity Case 2 will have a lower price, and is projected to begin sales in late September following the expected release of Apple’s iPhone 7.