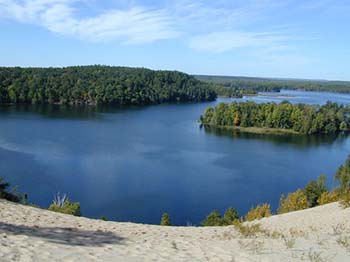 Calling all anglers: Work begins this week on a project to enhance five miles of the Au Sable River tributary in northern Michigan to improve the habitat of brook trout. Jackson-based Consumers Energy is funding the $165,000 project.

The Mason-Griffith Founders Chapter of Trout Unlimited will use the two-year grant to improve the fish habitat on the five-mile stretch of the West Branch of Big Creek, a brook trout stream and Au Sable River tributary.

“We’re confident this project on the West Branch of Big Creek will significantly increase the ability for trout to thrive in the improved stretch of water,” says Karen Harrison, president of the Mason-Griffith Founders Chapter. “We’re getting busy with the ‘waders-in-the-water’ effort today after the work crews spent last week in safety training and getting familiar with their equipment and the stream.”

Harrison says a group made up of mostly college students will spend about 13 weeks during the summer doing the work, which will include adding in-stream structures such as log jams along the banks and clearing or moving in-stream obstructions.

The Habitat Improvement Account, administered by the Michigan Department of Natural Resources, is earmarked for projects such as fishing access improvements on the upper Manistee River and a dam removal project on the Pine River, a tributary of the lower Au Sable River. Consumers Energy has contributed more than $8.5 million to the account since 1994.