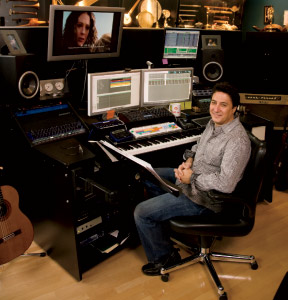 Like a true music man, he pulls audiences in with scores so compelling, no one dares move for fear of missing what comes next. Joseph LoDuca is a composer and musician who creates the ambience, thrills, and tension for movies and TV shows from his elaborate state-of-the-art studio in Bloomfield Hills.

“I travel for business meetings and some recording — to L.A., Salt Lake City, London, Prague … it depends on the projects — but not as much as I thought I would,” LoDuca says. “But the writing, which is 90 percent of the effort, is here at home. I realized the writing can be done anywhere.”

The principal of LoDuca Music, LoDuca initially studied classical guitar and composition at the University of Michigan, and then Wayne State University, in the early and mid-’80s, where he was mentored by a former GM engineer-turned-classical-guitarist named Chuck Postlewaite. “Music always came easily to me,” LoDuca says. “Chuck approached technical problems like an engineer, which was a great complement to my intuitiveness. When you write for film, you have to write backwards, like a crossword puzzle. The event, mood, and duration are prescribed, and there are strict time constraints.”

While playing in jazz clubs and creating music for commercials, LoDuca had a random encounter with a couple of local filmmakers, Sam Raimi and Rob Tapert, which led to his current career. “We hit it right off,” LoDuca says, “and I still work with them. They had this wacky low-budget movie, and they said, ‘Make some scary music,’ and I said, ‘I can do that.’”

The movie, Evil Dead, became a cult hit, and led to other movies with Raimi and Tapert. Most recently, LoDuca finished Lionsgate’s The Burrowers in Toronto, and The Edge of Love, starring Keira Knightley, in London. “Everything is based on deadlines,” he says. “I’m working with producing partners … from Europe to California, so I’m often working round-the-clock.”