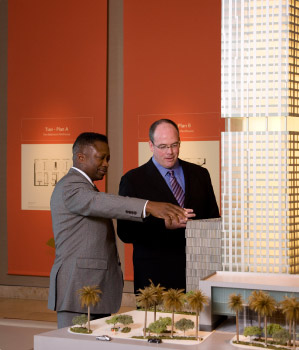 Part of the design team for the MGM Grand Detroit, Rainy Hamilton (left), president of Hamilton Anderson Associates in Detroit, was invited to bid on an $11-billion entertainment complex to be called CityCenter that MGM Mirage is developing on the Las Vegas strip, between the Bellagio and Monte Carlo casinos. “We bid on one part of the project, but we weren’t successful, but we were invited back and, as it turns out, we’re now working on the entire development,” Hamilton says. After founding his multifaceted design firm with Kent Anderson in 1994, the pair have since grown the operation to nearly 140 employees, including a nine-person staff in Las Vegas. While Hamilton Anderson has worked on many coveted projects close to home, including Ford Field and Brush Park, the company’s new Las Vegas office is making a name for itself. “We’re [one of] the architect of record for CityCenter, and we’re working on other renovation projects at the MGM Grand, the Luxor, and Mandalay Bay,” Hamilton says. During a recent visit to the CityCenter sales center, Hamilton and his colleague Russell LaCoursiere (right), a construction contract administrator, examined a scale model of the Mandarin tower, a hotel and residential project set to open later next year. “We’re holding our own with world-renowned designers,” Hamilton says. “That will help us land other design projects around the world.”