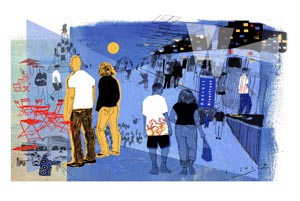 In the midst of the greatest economic downturn since the Great Depression, a shrunken auto industry, high unemployment, a brain drain, and an increased demand for basic human services, the world is watching to see whether Detroit can revitalize itself and return to prosperity.

Remarkably, it now appears that philanthropy, rather than state and local governments faced with depleted budgets, is playing a more critical role in turning around the struggling region. It’s a noteworthy evolution; traditionally, the philanthropic efforts of private and public foundations has largely been directed to support the work of cultural, educational, medical, and human services organizations and institutions.

While that critical support continues, local foundations are taking bold new approaches to philanthropy. Through collaboration and with strategic investments, they are stimulating economic development in the region. Many believe these creative new steps are crucial for the area’s survival.

“Foundations, for many years, thought the economy wasn’t their problem,” says Laura Trudeau, director of the Detroit Program, part of the Kresge Foundation’s primary community development effort. “But now philanthropists are reaching the conclusion that transformation can only take place through more holistic, coordinated approaches that involve various sectors.”

In recent years, the Troy-based Kresge Foundation has taken a role in supporting major Detroit community projects. The Kresge Foundation contributed $3 million toward the $20-million development of Campus Martius Park, the thriving 2.5-acre public space that has helped to catalyze downtown Detroit’s redevelopment initiatives. Another $2 million supported renovations at Eastern Market, one of the country’s oldest and most popular public markets.

Even greater, the Kresge Foundation awarded a $50-million lead grant — its largest ever for a single project — to the Detroit RiverFront Conservancy for the development and enhancement of the riverfront, with the goal of making it a premier gathering place. Other major funders included the Battle Creek-based W.K. Kellogg Foundation and the Community Foundation for Southeast Michigan.

“We learned through these successful projects that it is possible to transform a public space in a way that has the power to transform a community’s own identity,” Trudeau says.

Longtime Detroit philanthropist Edsel B. Ford II, the former chair of the Detroit 300 Conservancy — which, along with the city, created and now maintains Campus Martius Park — is a believer in what foundations can achieve.

“The local foundations, private corporations, and individuals have been extremely generous and have found a way to support Detroit-based initiatives,” says Ford, who serves as a trustee at the Skillman Foundation and who, along with his wife, Cynthia, has his own family foundation. “I think foundations have really seen what collaborations can accomplish.”

Following the mission of Detroit dime store pioneer S.S. Kresge to “serve the benefit of humankind and better the conditions in which people live,” the Kresge Foundation has become the second largest private foundation in Michigan, with an investment portfolio of approximately $3 billion, and it is the 18th largest foundation in the country. Last year the foundation awarded $197 million to 404 nonprofits.

Under CEO Rip Rapson’s leadership and Trudeau’s day-to-day involvement, the Kresge Foundation has been a key partner in promoting and supporting the Woodward light rail project. Known as M1 Rail, the first 3.4-mile stretch will run from the riverfront to the New Center area, and will connect some of the city’s best-known entertainment districts, including Comeria Park, Ford Field, and the Fox Theatre. The foundation has committed $35 million toward the cost of planning and building the line, which it views as a catalyst for Detroit’s revitalization and for a more effective regional transit system.

“Once you get transit — and hopefully, one day, high-speed rail — you get economic development along that system,” Trudeau says. “This is the only time in American history where this much philanthropic support has been assembled to build transit, which traditionally has been in the public domain.”

The light rail project is part of a nine-bodies-of-work revitalization framework Rapson includes in his hand-drawn rendering entitled “Re-imagining Detroit 2020,” a depiction that reflects what he sees as the initiatives being addressed by philanthropy, nonprofits, and the public sector.

More foundations are operating strategically and with a more collaborative approach, says Robert Collier, president and CEO of the Council for Michigan Foundations, a  consortium of more than 350 grantmaking organizations working to increase philanthropy in southeast Michigan and statewide.

“We’re seeing greater collaboration between foundations and the nonprofits they support, and clearly the foundation community is concerned about economic development and employment,” Collier says. “Many people refer to foundations as the venture capital of the nonprofit sector. They can take risks and support innovation and new ways of doing business, but they can never replace the government or private sector.”
Trudeau points to the New Economy Initiative (NEI) as a good example of a funded collaboration that has produced results for entrepreneurship and development along the Woodward Corridor.

Started two years ago, the eight-year initiative involves 10 local and national foundations, and the NEI has committed $100 million to accelerate the transition of metro Detroit to an innovation-based economy. It is the largest foundation-led economic development plan in the country.
In addition to creating neighborhood-based businesses in Detroit, the NEI is helping to redevelop the New Center area as a global center for arts and design. By offering internships to 25,000 Michigan-based college students, the organization is hoping that talented young professionals will remain in the area to help create the new economy.

The NEI, along with the Kansas City, Mo.-based Kauffman Foundation, is also supporting an ambitious entrepreneurship initiative called “FastTrac to the Future.” The initiative is housed in TechTown, the research park at Wayne State University devoted to making technology and entrepreneurship a catalyst for the city’s economic growth. Its goal is to generate 1,200 new companies in the Detroit area by 2013.

“An intensified level of collaboration among these outstanding business organizations will create a multiplier effect, re-energizing their existing initiatives and bringing about new and unparalleled cooperative ventures,” says Egner, who as president of the Hudson-Webber Foundation has also championed an initiative to attract 15,000 young professionals to live and work in Detroit by 2015. “It sends a powerful message to business leaders across the nation that southeast Michigan is working in a smart, integrated fashion to grow its business community,” Egner says.

Thus far, Egner says $39 million of the $100 million in NEI grants have been utilized, and he’s pleased with the progress.

“In terms of infrastructure, regional focus, and building coalitions, NEI so far is getting a good grade. But in terms of real outcomes, we won’t know until there’s more evaluative data and time passes,” Egner says. “However, I think 10 years from now, people will start rediscovering Detroit as one of the leading urban centers and economic regions in the world.”

The NEI is part of the Community Foundation for Southeast Michigan, an organization started more than two decades ago by Joseph L. Hudson Jr. and several prominent Detroit philanthropists.

Providing support to a variety of programs benefiting arts and culture, civic affairs, health, human services, work force development, environment, land use, and community development within the seven counties of southeast Michigan — Wayne, Oakland, Macomb, Livingston, Washtenaw, St. Clair, and Monroe — since its founding in 1984, the Community Foundation has distributed some $435 million through more than 37,000 grants to charitable projects throughout the region.

With its seven-county coverage, the foundation has taken a collaborative, regional approach in trying to resolve community needs. One of the best examples of this philosophy is the GreenWays Initiative, which links more than 80 municipalities through 100-plus miles of biking and walking trails.

“Since day one we have been about partnerships with other foundations, nonprofits, and communities, and I don’t think we’ve ever done a large project without that collaboration because none of us are large enough to take on the big issues alone,” says Mariam Noland, who has been the foundation’s president since 1985.

Although foundations are increasingly working more collaboratively in trying to jump-start economic development, the traditional work of corporate foundations and charities continues to address community needs — but with an even more discerning eye toward accountability and results.

Collier, of the Council of Michigan Foundations, notes that accountability and collaboration have become increasingly important in the nonprofit world.

“In Washington, policymakers are asking, ‘What results are you getting? What impact are you having?’ Now, if you come to a foundation with a new project or organization, the first question will be, ‘Have you talked with others who may already be addressing the issue, and is there an opportunity for collaboration?’ ” Collier says.

Yet foundation leaders agree that philanthropy alone cannot ultimately be the elixir that turns the economy around and transforms a region, says the NEI’s Egner.

“Foundations in this region are playing a key leadership role in helping to bring focus and resources in a time of change, but philanthropy doesn’t have enough collective money to turn around the region without a strong government, a strong private sector, and involved citizen groups pulling in the same direction,” Egner says.

When It Comes to Mobility, Michigan Is Where the Action Is...

3 Tips for Planning a Successful Virtual Event in 2021

Guess What? Money Does Grow on Trees!