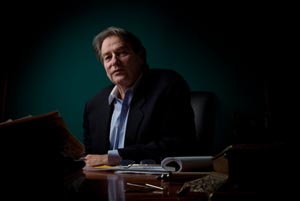 Corporate security has never been more difficult or complex. The list of threats to a company today is almost endless, including terrorism, biological attacks, and cyber theft — and the list goes on.

“What hasn’t changed is a criminal’s pursuit of power, money, or influence,” says Norm Nickin, president of National Security Service in Birmingham. Directing a team of retired federal agents, ex-military special operations personnel (including three former snipers), military-trained bodyguards, and off-duty police officers, Nickin says his business is anything but stress-free. “For every security device the industry comes up with, someone is working feverishly to thwart it,” he says.

A security expert for more than 25 years, Nickin started out protecting corporate executives and celebrities such as Frank Sinatra, Sammy Davis Jr., and Bob Hope. But over the last two decades, the graduate of the Roosevelt Military Academy in Aledo, Ill., has taken to the world stage as transportation advances have boosted international trade.

“Global conflicts and corporate security share a unique relationship — one can’t grow without the other,” Nickin says. “Our business has grown steadily, but the days of yanking guys out of cars is long gone. Now we’re hired to find money in offshore accounts, set up electronic surveillance equipment, debug rooms, or undertake security in places like Iraq, Somalia, or Afghanistan.”

As the United States government seeks to boost exports to reduce the trade deficit, Nickin says more domestic companies will open foreign-based offices and operations. “Some countries like China want to be a part of the action, so you need to be on the ground there,” he says. “There’s a lot of opportunity.”

Founded in 1985, National Security Service has 55 employees. Nickin says the company routinely protects executives traveling on business in Third World countries, including a recent assignment that lasted nearly five months. He declined to reveal specific details, due to security concerns.

Nickin says personal protection services has changed over the years. “It wasn’t as involved as it is today. We used to spend weeks on the road with Frank Sinatra,” he says. “We would take over a whole (hotel) floor every night and just lock it down. My partner and I would take rooms on either side of Frank. We’d lock the stairwells down and have two guys at the elevator.”