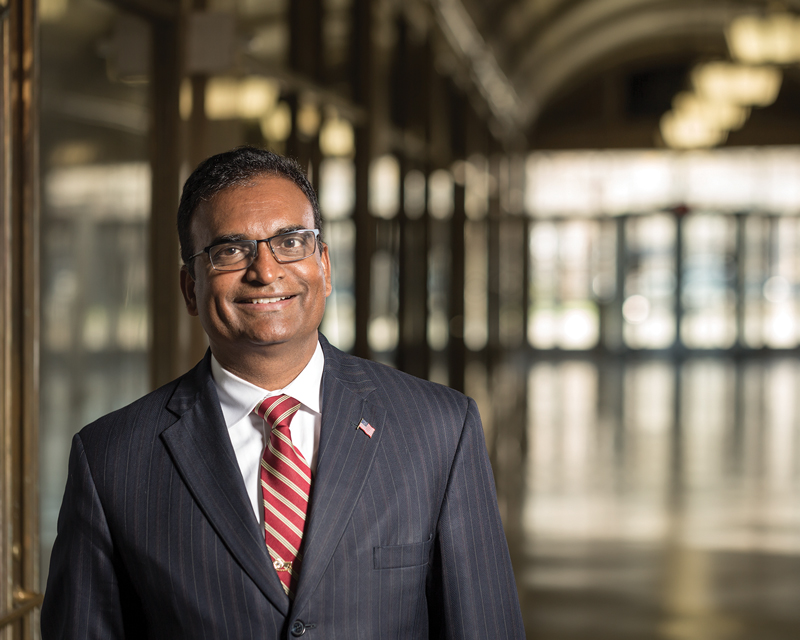 Avinash Rachmale knows all about controlling and operating a business, and the downside of watching from the sidelines when things turn south.

As CEO and chairman of LGC Global, a multifaceted, minority-owned construction company in Detroit’s New Center, Rachmale saw firsthand what happens when a business owner no longer oversees day-to-day operations.

After founding the company in 1994 — Rachmale had come to Detroit from India to earn a master’s degree in civil engineering at Wayne State University in Detroit — his one-man operation initially assessed, cleaned, and replaced underground fuel storage tanks at some 200 service stations.

“I didn’t have a lot of money in those early days, but I had a burning desire to own a business,” Rachmale says. “I leased a truck, rented the equipment and, to grow, I went back to my roots at Wayne State and hired students. From there, I was certified as a minority business, and that opened up new opportunities.”

The business grew rapidly, and in 2010 it reported $624 million in annual revenue. In the same year, it acquired TolTest Inc. and became Lakeshore TolTest. But then things took a turn for the worse. To help propel growth, Rachmale sold stakes in the business to private equity firms. A new CEO came on board, the company moved to Chicago, and Rachmale became chairman emeritus while overseeing the operations in metro Detroit.

“The new team performed poorly and the business filed for Chapter 7 bankruptcy (in 2014),” Rachmale says. At the same time, he got pulled into a lawsuit involving former Mayor Kwame Kilpatrick. The government charged Kilpatrick with corruption and soliciting kickbacks, and Rachmale served as a prosecution witness during the trial. Kilpatrick was charged and sent to federal prison.

“I’ve been through rags and riches, and what I’ve learned is that if you want to grow a company, you need to control it,” he says. “We’re almost back to where we were (in terms of 2010 annual revenue), and the way we came back was by focusing on our core values, hiring a great team, and supporting our customers.”

With infrastructure aging across America, and with development opportunities overseas, LGC Global has a long runway in front of it. In addition to construction projects — including the renovation of several public schools in Detroit — as well as facility management, Rachmale is looking to be more active in the city.

“There’s a need for 15,000 apartments in Detroit, so we’re developing residential and commercial projects near Woodward Avenue and West Grand Boulevard; we’re rebuilding infrastructure locally, nationally, and internationally; and we’re focused on a future that’s under our control. It’s been a long road back, but we’re successful again.”