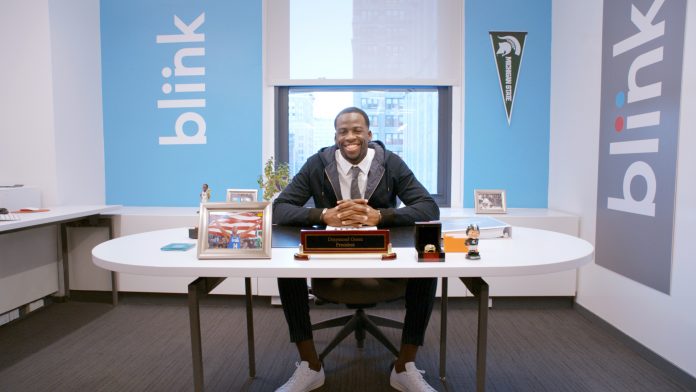 Blink Fitness and Golden State Warriors forward Draymond Green have announced a franchise development deal to bring at least 20 gyms to Michigan and Illinois. This is Green’s first investment in the company. He is a two-time NBA champion from Saginaw.

“I’m really excited about bringing Blink gyms to Michigan and Chicago,” says Green, who played on the Michigan State University basketball team from 2008-2012. “I think about where I grew up and the people I grew up with. We didn’t have anything like Blink. Everyone wants a cool place to get fit and workout. But lots of communities don’t have any options. The places are either terrible or too expensive. We’re going to change that. This is not an endorsement deal for me. I’m going to invest my money and my time to partner with Blink to bring an amazing gym experience to these communities.”

The agreements were signed by Green and Tom Shumaker, a finance professional who spent more than 10 years as an investment banker in New York and Chicago.

“Draymond and I both have the passion, drive, and desire to win – and love putting in the work to get there,” says Shumaker. “We are both ecstatic to be early franchise adopters of the Blink brand. I couldn’t be more thrilled to have such a resilient, energetic, and confident business partner with whom to tackle this new venture.”

No locations have been formally announced, but Green and Shumaker are evaluating Detroit, its suburbs, Lansing, Ann Arbor, Grand Rapids, and the Chicago region.

Green was an All American player at MSU, while Shumaker was on Georgetown University’s tennis team as a freshman and rowing team for his sophomore through senior years.

“Draymond and Tom are the perfect franchisees for Blink because of their complementary skill sets, shared passion for fitness, and deep knowledge of the Midwest market,” says Todd Magazine, Blink Fitness’ president. “This deal is extremely significant to Blink’s national expansion because it represents a stronghold in the Midwest, adding to our east- and west-coast footprint.”

Blink was founded in 2011 and has more than 90 locations open or in development throughout New York, New Jersey, Pennsylvania and California. The gym focuses on the positive feeling people get from exercising.