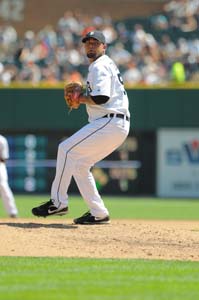 Looking to return to the playoffs after a four-year absence, the Detroit Tigers added several high-profile players in the off-season while offering extensions to key contributors like outfielder Magglio Ordonez and shortstop Jhonny Peralta.

The moves bode well for a team looking to rebound from a three-year drop in attendance. Last year, the Tigers drew nearly 2.5 million fans, down from a record of 3.2 million fans in 2008. Attendance has been a driving force for downtown hotels, bars, restaurants, and transit firms in recent years.

The roster moves caught the attention of national analysts. Fox Sports moved the team up one spot – to 14th in the 30-team league – as part of its pre-season MLB Power Rankings. But anything can happen, given that success in baseball depends on player health, streaks, and pitching matchups (impossible to predict over a full season, due to weather delays and injuries).

While player health is always a concern – the Tigers were battling for first place last July before Ordonez injured his ankle – there are several open-ended questions heading into Opening Day. For starters, president and general manager Dave Dombrowski and manager Jim Leyland are in the final year of their respective contracts.

That could be a distraction. But if the Tigers post a winning record early on, it’s likely team owner Mike Ilitch will re-sign the pair.

Other concerns are consistency at second base, as three players will compete for playing time: Will Rhymes, Scott Sizemore, and Carlos Guillen. Catcher Alex Avila, meanwhile, has been tapped as the starter – a new challenge for the former backup. If he struggles, however, Martinez can step in.

As for pitching, the Tigers head into the season with few question marks. The starting rotation looks to be one of the best in the league with Justin Verlander, Max Scherzer, Rick Porcello, Phil Coke, and Penny.