Twenty years ago, Greg Sandler was working in the local machine tooling sector when his employer cut sales commissions across the board. Rather than accept a pay reduction, Sandler decided to pivot and develop a more sustainable enterprise in the fast-growing automation industry.

“My business partner, Vince Mileto, and I met at an Applebee’s in Woodhaven and put a business plan together that would create a service model for our future customers, not just sell them machines,” says Sandler, partner of Dynamic Machine in Troy. “We sell the machines, but we also program a client’s buildable parts, train their people, and service and maintain the machines.”

Sandler readily admits larger machine purveyors provide similar services, but he maintains his firm’s offering of “big company services with a small company feel” has attracted a steady share of automation operators. Dynamic Machine, which has 49 employees, sold close to 300 machines in 2021 at a cost ranging from $150,000 to more than $1 million, up from 225 units in 2020 and 150 units the year prior. 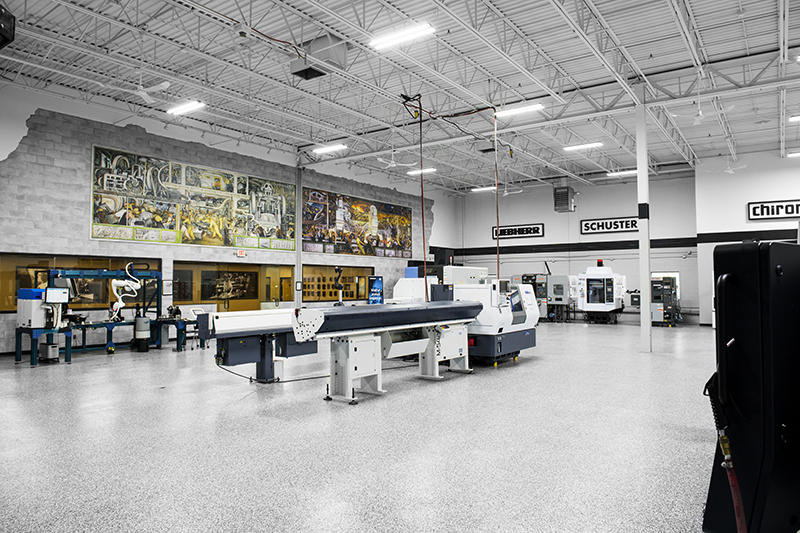 To drive growth over the past two decades, the company expanded to the west side of Michigan — in Byron Center, south of Grand Rapids — and in Canada, where it services the Ontario and Quebec markets. The Troy headquarters, meanwhile, works across southeast Michigan, and parts of northern Ohio and western Pennsylvania.

During a recent tour of the Troy facility, which spans 25,000 square feet of space, Sandler showed off an array of machines that are the workhorses of the manufacturing sector. The units, which can grind, shape, sort, and transfer metal parts, are either sourced from Europe (mostly Germany) or southeast Asia, particularly South Korea or Taiwan. Brand names include Miyano, Fuji, Chiron, Liebherr, Accuway, Enshu, and more.

“Companies are trying to figure out how to make parts here with the least amount of labor while being cost-effective. That’s certainly helped our business, and we see strong growth for the next few years to come. The good news is the machines and robots we sell and service are becoming much more adept.”

According to the Association for Advancing Automation (A3) in Ann Arbor, robot orders were up 67 percent in the second quarter of 2021 (the latest figures available) compared to the same period in 2020, showing a return to pre-COVID-19 demand for precision parts as manufacturers and others return to work. North American companies ordered 9,853 robots valued at $501 million in the second quarter.

“With the big increases in automation sales and favorable economic conditions in the U.S. manufacturing sector throughout much of 2021, it’s clear users have accelerated their orders for robotics and other forms of advanced technologies,” says Jeff Burnstein, president of A3. “While companies have long realized that automation increases efficiencies, expands production, and empowers human employees to do more valuable tasks, the pandemic helped even more industries realize those benefits.”

The growth came from an array of companies that produce components for passenger and cargo vehicles, heavy equipment, aircraft, appliances, food products, consumer goods, and more. In the biomedical field, meanwhile, the University of Michigan in Ann Arbor recently received a $1.7 million grant from the National Institute of Health to develop a new type of powered exoskeleton for lower limbs. The powered exoskeleton is an effort to bring robotic assistance to workers, the elderly, and others with disabilities.

“The revitalization of automation we’re seeing across myriad industries is extremely encouraging,” Burnstein says. “Not only will the increase in automation use be a win for our member companies, but it will also help the U.S. economy grow even more as customers increase productivity and fill the millions of manufacturing jobs that remain unfulfilled.”

Another growth sector comes from the recent introduction of collaborative robots, or cobots, where humans work side by side with an automated machine. The latest single-arm robots are highly sophisticated and have a dexterity humans can’t match.

“When you work next to a robot, the sensors inside boost productivity because they can take a geared part and fit it into another geared part much faster than a human,” Sandler says. “The dexterity at speed is unbelievable. Plus, robots never get tired, they can work around the clock with minimal supervision, and they don’t call in sick.”

While robots have come under attack from labor unions and others for taking jobs from humans — repeated tasks like manning a deep fat fryer can be dangerous — they boost safety. Automation, in turn, drives the need for more skilled positions, which has been a boon for higher education and advanced training providers.

Asked about future challenges in the machine industry, Sandler says he’s concerned about inflation and supply chain slowdowns, along with the potential for rising interest rates.

“There’s education, as well,” he says. “America has fallen behind in our industry and we should (reinstall) the machine shops in high schools that were pulled out for budgetary reasons. We need to create more apprenticeship programs, too. Apprentice training programs can be hard for businesses to afford, so that’s an opportunity for community colleges and technical schools.”