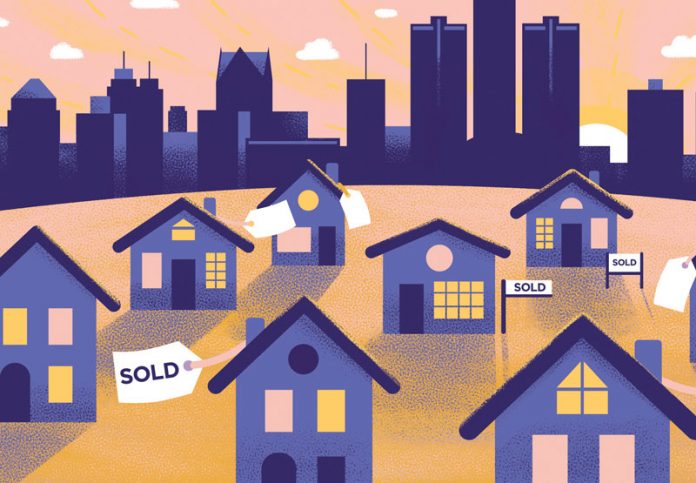 Matthew and Sara Carrier finally decided to sell the home in Waterford Township where they had lived since 2008. But finding a new home wasn’t easy.

“The process was discouraging because, with the amount of money we had to spend, you would think you were getting this great house — but in a lot of areas, (home prices) have gone up so much,” says Sara, a human resources training coordinator. “We looked at 25 homes and we made offers on one in Wixom and one in Lake Orion. We went in at or above the asking price both times, and we were declined.”

Like the Carriers, thousands of potential homebuyers in metro Detroit and across the country are faced with a shortage of available properties and skyrocketing prices. “The overriding themes are significantly short supply and an overabundance of demand,” says Justin Woodbeck, a principal of the Woodbeck Team, an independent real estate company that partners with Keller Williams offices in Rochester and Troy. “It’s causing a majority of listings to go to multiple-bid scenarios, and (they’re) often selling for tens of thousands of dollars not only above asking price, but also above appraised value.”

For prospective buyers who are serious about purchasing a home, waiting isn’t much of an option. Consider, entry-level homes in metro Detroit have appreciated 16 percent in the past 12 months, while 24 percent of the homes acquired in the region last year sold above the asking price, according to Zillow, which operates a real estate database that lists the condition and estimated value of more than 110 million homes across the nation.

The Carriers’ house-hunting eventually had a happy ending. After several months of actively searching for a home, their offer on a house in Clarkston was accepted. They closed in May. Sara says the best part of the process was getting the mortgage. “They held our hands throughout the whole process to make sure it was the least stressful part,” she says.

That’s high praise for the mortgage industry, which has had a significant presence in the state for years. Today, Michigan is home to 521 nondepository institutions, 80 state-chartered savings banks, and 141 credit unions. Many of them offer some mortgage products, according to the Michigan Mortgage Lenders Association. 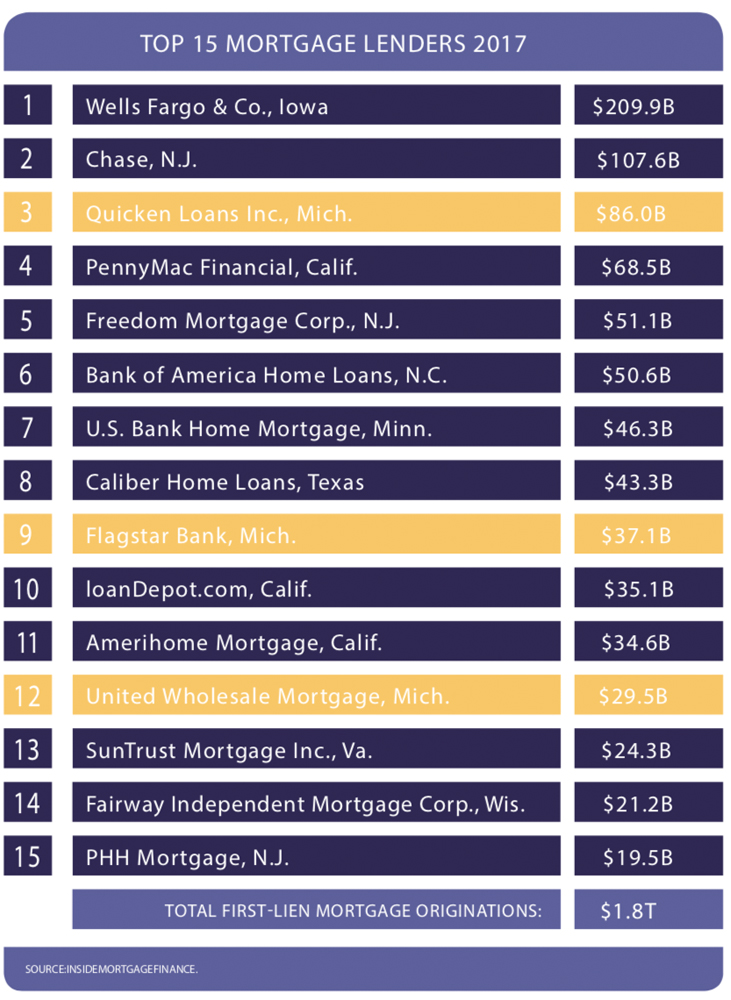 Of the top 12 U.S. mortgage originators, three are based in Michigan, according to data compiled by Inside Mortgage Finance. Quicken Loans Inc. in Detroit was the top lender by retail volume in the fourth quarter of 2017, with $25 billion in loan originations. For all of last year, Quicken Loans was the third-largest mortgage originator in the country, with a volume of $86 billion. Flagstar Bank, based in Troy, posted a loan volume of $37 billion last year, while United Shore in Pontiac, the parent company of United Wholesale Mortgage (UWM), had a volume of $29.4 billion.

“It’s been a long journey to get (to No. 1),” says Bill Emerson, vice chairman of Quicken Loans. “It starts with culture and our team members and … then add technology that allows our clients to communicate with us at any time of day, simply and with confidence.”

Quicken Loans launched Rocket Mortgage, its online loan origination portal, in February 2016. Emerson says 98 percent of the company’s customers used the platform — which finalizes mortgage applications in as little as eight minutes — in the first quarter of this year. “Rocket Mortgage has been a huge success for us and it has certainly changed the industry,” he says. “We’ve originated billions of dollars in mortgages through that in the last few years. People can provide income and asset information to us safely and securely. When you get data directly from the employer or financial institution, you know it’s clean, so you’re making a great lending decision.”

Rising interest rates and the mortgage industry’s cyclical nature apparently do not cause Emerson to lose sleep. “As interest rates go up there are going to be a lot of people in the industry who are going to struggle,” he says. “It’s really not about interest rates for us. We’ve been in this business for 33 years and we’ve seen all the fluctuations. We have built our balance sheet over the last 10 years and we are incredibly well capitalized. We’re right around six percent of the market as a retail lender in a very fragmented industry. If you’re going to take market share, you have to go to seven, eight, nine, 10, you know?”

United Shore refined its business model in 2014, selling its “walk-in” Capital Mortgage Funding arm to Fairway Independent Mortgage Corporation of Madison, Wisc. The point was to focus 100 percent on the wholesale market, where third party mortgage brokers funnel borrowers to the company. Still, United Shore has maintained its position as the number one wholesale lender in the country since 2015 and increased loan production by 29 percent in 2017

“We made the decision that getting a mortgage through a retail lender doesn’t make sense; it should only go through a broker,” says Mat Ishbia, president and CEO of United Shore, pointing to the firm’s partnerships with 8,000 mortgage companies and 30,000 loan officers in 50 states. “Plus, wholesale mortgage rates are cheaper than retail mortgage rates. And we can get it done for you in 15 days.”

United Shore’s volume has risen from $13 billion in 2015 to an estimated $41 billion in 2018. “The market has stayed the same, and we’ve taken a huge market share to where, now, one in 40 mortgages in America come through our company,” Ishbia says.

To accommodate United Shore’s 2,400-plus employees and organic growth, the company recently moved from Troy to a newly renovated facility in Pontiac that once was home to Hewlett Packard and General Motors Co. At 610,000 square feet, the new space is more than twice as large as United Shore’s former headquarters at Maple Road and Stephenson Highway.

Terms of the 2017 deal were not disclosed, but Ishbia says he’s paying “about the same per square foot” in Pontiac as he did in Troy.

Between Quicken Loans Inc. in Detroit, Flagstar Bank in Troy, and United Wholesale Mortgage in Pontiac, the latter company has shown the highest percentage gain in retail volume between 2013 and 2017. Source: Inside Mortgage Finance.

Flagstar Bank in Troy offers mortgage products through all channels, including retail and direct-to-consumer loans, but the vast majority of its volume is generated with third-party originators. Through several recent moves, the bank has been looking to fine-tune its strategy.

Flagstar has historically generated some 90 percent of its mortgage business from third-party originators, with the rest coming from retail activity at its 99 Michigan branches, says Kristy Fercho, executive vice president and president of mortgage at Flagstar Bank. “Because we have a national mortgage company with our third-party business, we really wanted to match that with our retail. That’s No. 1 in our strategy: How to grow our share of retail originations? The second part is to expand our work with third-party originators.”

In early June, Flagstar announced it would acquire 52 Wells Fargo Bank branches in Michigan, Indiana, Wisconsin, and Ohio, while in March it acquired eight branches of Desert Community Bank in San Bernardino County, Calif., with nearly $600 million in deposits, from East West Bank. In April 2017, the bank acquired certain assets of Opes Advisors Inc., which had a mortgage banking business that generated retail originations from 39 retail locations in California, Oregon, and Washington.

“When you have branches and a banking relationship, it’s natural to think about your local bank as an extension when (people are) looking for a mortgage,” Fercho says. “We want to drive our retail strategy through those retail branches.”

While low unemployment and tax breaks stoke a growing economy, the mortgage industry faces headwinds. “With 30-year interest rates nearing 4.8 percent, 80 percent of homeowners have no incentive to refinance,” says Mike Fratantoni, chief economist at the Mortgage Bankers Association in Washington, D.C. “Refi volume has dropped 40 percent from 2016 to 2017, and we think it’s going to drop another 30 percent in 2018.” He also predicts a 5-percent decrease in total industry volume in 2018, and notes that the average profit on a loan origination has shrunk to 0.4 percent of volume from 0.6 percent of volume.

“A potential answer to these challenges is to invest in more technology, automate what you can, try to reduce costs, and provide a better customer experience, whether (it’s by) enabling a customer to track the progress of their loan or otherwise bringing the mortgage practice into the 21st century,” Fratantoni says. “There are some folks in Detroit who are doing quite a good job at that.”

“Flagstar did a partnership with Lenderful in the Michigan market to see how their technology would enhance our customer acquisition,” Fercho says. “We had a very successful pilot and decided this year to expand Lenderful to three other states (which she declined to identify). We believe that as we continue to learn more about the technology, we’ll be able to drive more business.”

In another plus for the industry, community banks in Michigan and throughout the country stand to benefit from the Economic Growth, Regulatory Relief and Consumer Protection Act of 2018 that President Donald Trump signed into law in May. The bill rolled back rules that had restrained banks from making certain types of loans, while providing for a more business-friendly Consumer Financial Protection Bureau.

“It is our belief that more community banks will be drawn back into the mortgage origination market in light of the passage of (this bill),” says Mike Kus, a spokesman for the Community Bankers of Michigan, an industry trade group in East Lansing. “It will provide significant relief to community banks and allow them to originate a larger variety of mortgages that initially we were not able to do under the Dodd-Frank Act.”

“Community banks were very famous for being able to help people who had unusual circumstances,” says Stephen Ranzini, president and CEO of University Bank in Ann Arbor. “If you had collateral and we had confidence in you, but you didn’t quite fit into an underwriting box, we could do it anyway.”

Ranzini points to a program the bank had in the 1990s that he says helped break down mortgage barriers to minorities in Ypsilanti. “We had no foreclosures, every single loan in the program paid off, and we did like $10 million of first-time homebuyer loans to put mostly minorities into homeownership,” he says. “Under Dodd-Frank, $10 million would be too small to qualify for the program. You couldn’t do that under the regime that existed (earlier this year).”