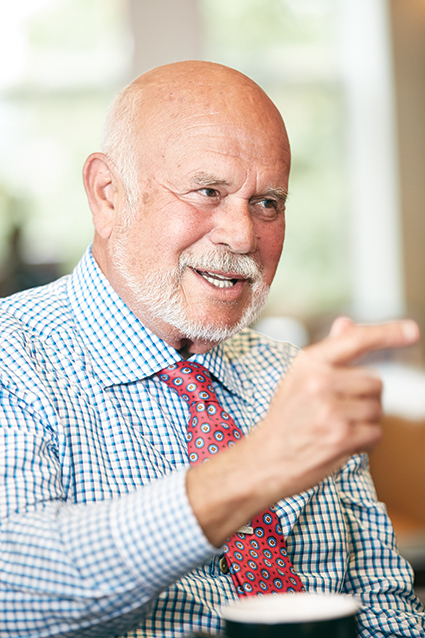 In a bright, airy, second-floor walkup overlooking Pierce Street in downtown Birmingham, Peter Karmanos Jr. is working on a second act he believes will be as impressive as his first with Compuware Corp.

Mad Dog Technology, which Karmanos and six partners started 18 months ago, is the venture capital parent of a cloud-based energy management company, Resolute, that seeks to revolutionize energy usage in buildings owned by major enterprises. Projections indicate Resolute will generate $200 million in revenue in three to five years, with a corresponding valuation of $2 billion to $3 billion.

“Resolute does energy management in the cloud, so it’s a green company,” says Karmanos, chairman of Mad Dog. “We project to save companies 20 percent to 25 percent on their energy bills. (It will) allow them to monitor energy use from a central location using their smartphone or their iPad.”

More than two years after his 40-year run at Compuware ended — with his retirement as chairman of the board in March 2013, his abrupt firing from a consulting contract a few months later, and his ejection from his office and parking space in the iconic downtown building he created — things are looking up for the 72-year-old technology pioneer.

On a recent morning, Karmanos, who owns the National Hockey League Carolina Hurricanes, was in his office savoring congratulations from friends and associates following his selection the night before to the Hockey Hall of Fame. He was elected for his lifetime contributions to youth hockey in metro Detroit.

His well-furnished, boutique office in Birmingham may be a long way from his expansive 15th-floor suite overlooking Campus Martius Park in downtown Detroit, with its multifaceted fountain that he largely funded, but it pulses with the same reminders of his career of achievements.

In one corner is an antiquated gray cash register last used in the restaurant his parents once owned on Detroit’s east side. Above it is a black-and-white photograph showing his parents waiting on diners at the counter, with a young, dark-haired Pete Karmanos manning the grill behind them.

Framed newspaper prints recall his hockey triumph, when the Hurricanes won the Stanley Cup in 2006. There’s also a replica of the championship trophy near his desk, as well as the Lester Patrick Trophy the league awarded him for his outstanding contributions to the game after the 1997-98 season.

As he showed a visitor around, Karmanos was still glowing over a recent arbitrator’s decision that forced Compuware’s management to pay him $16.5 million after he sued for wrongful termination, and for stripping him of vested stock options in the company he co-founded with two friends in 1973. Like nearly everything connected to the larger-than-life-Karmanos story, the $16.5 million represents the largest arbitration award for an employment case in Michigan history, says Kevin F. O’Shea, partner of The Miller Law Firm in Rochester, which specializes in complex business litigation.

With that lawsuit behind him, and convinced that any further appeal will be rejected by the courts, Karmanos is moving ahead with Mad Dog and Resolute.

“Right now if you have, say, 25 buildings in your organization, generally you have some tools you can use to manage energy, location by location,” Karmanos explains. “But there’s no way (right now) a guy can sit in Detroit and manage them all. There are people who have responsibility, for example, in Detroit for all of General Motors’ facilities. We would be able to give that person the ability to monitor and efficiently manage energy use in every GM facility worldwide from his or her cell phone.”

The new company draws a lot of its talent from Karmanos’ former business. Of the seven top people listed on the company’s website, five are former executives or technology and programing experts from Compuware.

Mad Dog Co-founder Mark Hillman, was senior vice president for strategy and development at Compuware. Mary Vellucci, chief administrative officer, held a similar position at Compuware, while Chris Hallendy, a technologist, was a software developer at Compuware and a consultant with Covisint, a former Compuware subsidiary.

Doug Willoughby, another co-founder and co-managing director, was director of cloud computing strategy and chief architect of the advanced development group at Compuware. Paul Czarnik was Compuware’s CTO from 2008 to 2013, and today serves as Mad Dog’s co-managing director and CTO of Resolute.

A team member with no ties to Compuware is Ann Arbor native Bob Cell, a veteran Silicon Valley CEO, who is Mad Dog’s managing partner. During different periods, he led five different Internet-related businesses and has had varied stops in successful startup companies, along with serving as vice president of global new ventures, corporate development, and strategy at Kellogg Co. in Battle Creek. He started his career with GM as a process and industrial engineer.

One of his startups, My Buys in Redwood, Calif., helps online retailers maximize personalized product recommendations. The company collects data compiled on shoppers and their habits, and provides it to retailers, top consumer brand manufacturers, and various agencies. It has offices in New York, London, and Ann Arbor.

“When I started My Buys, we raised $40 million to $50 million in capital, and we wound up opening an Ann Arbor office,” says Cell, who earned an MBA from the University of Michigan in 1993. “Part of that was I wanted to diversify my little piece in Michigan by bringing non-auto jobs, specifically software, into Ann Arbor.”

After selling his stake in My Buys earlier this year, Cell was looking for a new business opportunity in Michigan when he met Karmanos and his partners at Mad Dog. He was floored by how much their vision mirrored his own. “I’m like, ‘Wow. This is full circle. You guys want to start a software company, leveraging the cloud, doing things that I was doing and wanted to do’ — and they wanted to do,” he recalls.

What’s more, Karmanos and his team shared Cell’s commitment to use their collective technology experience to diversify the state’s industrial base. “What we’re doing at Mad Dog is really trying to create the industry’s first venture operator,” Cell says. “We don’t have to come up with our own ideas, although we did with Resolute, but we want to work with venture capital to jump-start companies to think big. It takes a lot to get some of these big ideas going, so at Mad Dog we invest not just capital, but we also really invest management experience.”

To that end, Cell says the company recruited 25 “A-Players” who worked with him and others at their previous companies. “The great thing about this is the people we hired get a sweet gig,” he says. “Everybody we offered a job to accepted it, and nobody has left, so I think that bears it out.” 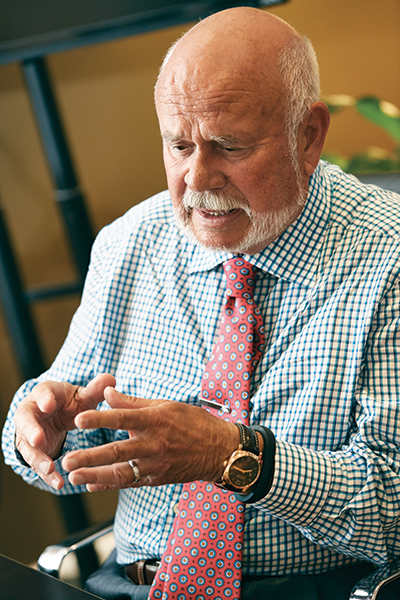 To attract the best employees to Mad Dog, the company offers equity in each of the companies, meaning an employee can build their own diversified portfolio of high-growth stock. “They get the fun of starting and expanding a company as opposed to coming into a big company where you’re filling (someone’s) shoes and have to work within the constraints of a big bureaucratic organization,” Cell says.

By year’s end, there will be 50 workers, double the employment numbers today. Karmanos says Mad Dog and Resolute will have as many as 300 employees in three to five years. He’s also eyeing relocating the Birmingham operations to downtown Detroit.

“The reason Google paid so much money for Nest wasn’t because they were going to make money on thermostats, but it’s the knowledge that they’re getting (about) understanding the home, energy usage, patterns of occupancy, and knowing more about how consumers (use energy) in their homes,” Cell says. “Think about Resolute as a Nest for enterprises. Anything that draws power, significant power in your buildings, we’ll automate the ability to know exactly how much power it’s drawing, be able to control it from the cloud, and be able to optimize how that power is utilized by all those pieces of machinery — heating, cooling, whatever.”

While major players in the field, such as Siemens, Phillips, Honeywell and others, offer systems to monitor and control their equipment in commercial buildings, those different systems can’t communicate with each other. Resolute’s engineers bridge that gap, offering software that can understand varied computer languages to extract data in real time from disparate pieces of equipment.

“That allows us to see inefficiencies, things that might have been on for years and companies don’t know why it’s on, or what it does,” Cell says. “That sort of information allows us to take data and not only optimize it on behalf of the client, but it will allow the client to do things that they could never do before. They can literally touch buttons on their phone and find data.”

Analysis of the data will help building owners save on capital expenditures. “Before they had to trust the word of a salesman; now they’ll be able to see it for themselves and decide where to spend their money,” Cell says. “We’re talking about saving 10 percent to 20 percent with any capital expense, any significant capital expense, and at the end you wind up with a building we’ve wired and it’s a smart building, so you can do a lot of other stuff and we can do it so you get a six-month to a year payback up and out the door. That’s delivering real value.”

Combining green energy and the cloud is a no-brainer, Karmanos adds. “The neat thing about this business is it doesn’t take a yeoman’s kind of effort to sell this because it makes sense,” he says. “The cloud gives us a unique ability to do something that wasn’t available five years ago. Energy costs are rising, and saving on that captures people’s interests.”

Already, Karmanos is using his longtime ties to the titans of Michigan industry and business leaders from around the world to make his new ventures successful.

“The nice thing about spending 40 years calling on all the executives in town is I do get in the door,” he says. “It all comes back to personal relationships and the fact that I delivered value in the past. I keep telling our guys, people don’t buy stuff from you because they like you; they buy stuff because you demonstrated that they get value for it.” db