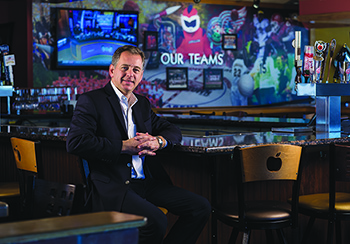 Mark Schostak was a college freshman in 1981 when opportunity came calling. Schostak’s father, Jerome Schostak, was developing a shopping center in Alpena, and Burger King wanted to be part of the tenant mix. The trouble was, loan interest rates were running 20 percent or more due to a national economic recession.

“They couldn’t find a franchisee because of the interest rates, so they asked if we would be willing to own and run the restaurant,” says Mark Schostak, now executive chairman of Team Schostak Family Restaurants in Livonia (formerly King Venture Inc.). “My dad was looking to diversify out of real estate, so we took on the project and built it out.”

In short order, Team Schostak hit on a winning formula that national franchisors often miss or neglect. The company-owned Burger King joined the local chamber of commerce and rotary club while supporting area charities and schools.

Eventually, Team Schostak transplanted the community model to other cities, and was operating 14 Burger Kings in Michigan by 1992.

In 2004, the company that got its start as a diversification strategy began to diversify itself and grow. (The original family enterprise, Schostak Brothers & Co., was started in 1920 by Schostak’s grandfather, Louis; today the company operates commercial properties in 19 states, including Laurel Park Place in Livonia.)

Since entering into a joint venture relationship with Troy-based Olga’s Kitchen Inc., Team Schostak has grown to include 11 restaurants in metro Detroit. The partnership with Olga’s was followed by a deal in 2005 with Del Taco, a California-based franchisor that today operates more than 550 restaurants, primarily along the West Coast. Locally, Team Schostak operates Del Taco eateries in Dearborn Heights, Roseville, and Warren and will add a Livonia location this year.

At the same time Team Schostak was adding franchise opportunities — the company now owns 60 Burger Kings in Michigan — it kept on the lookout for other potential endeavors. Enter Applebee’s, which, following an acquisition by IHOP in 2007, began selling company-owned stores.

“Long story short, we acquired 65 Applebee’s (in Michigan) and set about making $12 million in upgrades,” Schostak says. “Of that total, only four (eateries) belonged to their local chamber of commerce. Today, we’ve finished renovating 44 restaurants, and the rest will be done (this summer). We’re also adding local craft beers at every Applebee’s, and we’ll have new locations in Livonia and Southfield (in 2014), and two more next year.

“In each case, just like the first Burger King, we work with local charities, we do fundraisers for high school sports, we install murals of local activities, and we retrain our employees,” he says. “Today, we operate 160 restaurants (overall) and employ 6,000 people. Are we interested in expanding outside of Michigan? Yes, but in neighboring states. We don’t want to lose that local charm.” db