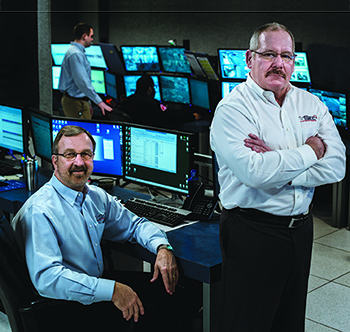 Not long ago, Art Van Furniture in Warren would follow a simple — yet time-consuming and expensive — routine: Every time one of its locations hosted a tent sale, the furniture and furnishings had to be transferred between the store and the tent twice a day.

“We looked at adding a guard at each of our tent sales (rather than moving the furniture back in the store), but that was an expensive proposition,” says Mike Case, Art Van’s director of loss prevention. Enter Huffmaster’s VirSec Virtual Security division in Troy. On a test basis, the company installed live-feed video cameras, speakers, strobe lights, and other remote-access technology inside and outside of six Art Van tents.

“Within the first week, one of VirSec’s personnel (watching remotely from its operations center) saw a van without its lights on, followed by another car with its lights off, pull into our parking lot,” Case says. “A bunch of people jumped out and headed for the tent. It was 3 a.m., and obviously they were there to steal our furniture.

“Well, the officer from VirSec turned on the strobe lights (remotely) and engaged them with the speaker system. He told them the Warren police had been called, and told them to leave. The police were there in three minutes, and they (van and car) were long gone. So we tested it some more, and now we’ll have the system at all of our stores.”

Case says VirSec removes the “human element” of traditional guard services. “People get tired, they fall asleep, their car breaks down on the way to work, they get sick, you name it,” he says. “With VirSec’s system, we’re looking at saving $500,000 (on security) over a five-year span.”

Founded in 1963 by Ray Huffmaster, a one-time law enforcement officer, his company initially provided uniformed guards at stand-alone locations. Soon after, its guards began to protect businesses and organizations. Fraud and other corporate investigation services were added, as well.

Three years ago, the company launched VirSec, which offers remote-monitored video and remote-monitored access at facilities around the country. “We can control access to doors or gates, do virtual patrols of warehouses, or offer on-demand virtual monitoring of a business such as a hospital, where a doctor or nurse leaves late at night,” says Craig Cassady, vice president of VirSec.

The system operates around the clock, and Cassady says the cost of its service is 50 percent cheaper than traditional guard services. Plus, an officer remotely monitoring a car dealership, for example, can engage an unannounced visitor in one of two ways. “If we see someone trying to steal catalytic convertors on a dealer lot, we can engage them in a specific way, say, we describe the fact that they are wearing a blue hoodie, and, of course, that the police are on their way,” he says. “Or if a potential customer stops by the lot after hours, we can say in a nice way that they are more than welcome to look at the cars and to enjoy the (display).” db