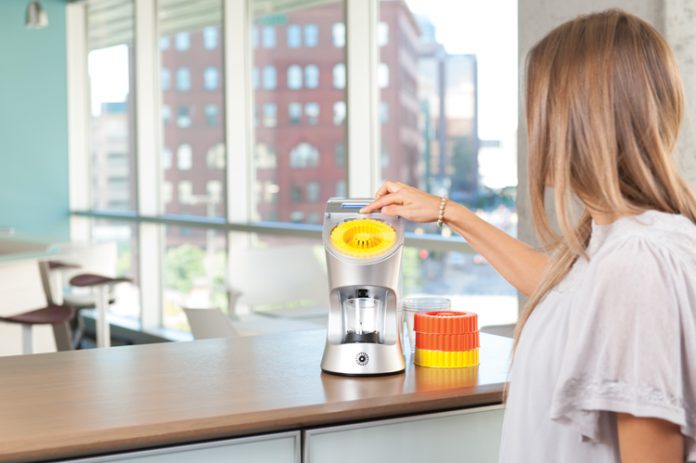 Ted Mills and Jeff Linton, two friends who previously worked in separate industries but shared the experience of caring for aging parents, wound up joining forces to develop an innovative way to provide the best nutritional supplements for them.

“We looked at traditional pills, but they have fillers and binding agents, and they don’t deliver the maximum amount of vitamins,” says Mills, co-founder and head of innovation at Tespo, a division of Life Boost in downtown Northville, “so we started looking at liquid vitamins. We were sitting in a conference room when we came up with the idea of a Keurig-type machine as a dispenser.”

After meeting in 2013, Mills — who worked in corporate finance — and Linton — a former executive in the heavy equipment sector — spent a year raising capital among family and friends so they could develop a dispensing machine. Following a successful soft launch of the product in December, they formally introduced the Tespo dispenser earlier this year.

“We’ve more than doubled our monthly forecasts, so we’re a bit stressed on the supply side,” says Tespo co-founder Linton. “We didn’t want to do a major marketing campaign until we had everything ready. We didn’t want customers waiting months for their dispensers.”

As part of the launch, nearly everything had to be designed from scratch, including the dispenser — a round, plastic disc that contains 31 daily vitamin cartridges, the filling equipment, and other production elements.

“When someone orders a ($129) dispenser, we automatically ship them a disc every month,” Mills says. “To get the disc back, we include a return address so that we can have it recycled. We don’t use the discs a second time, and we charge $30 for each one.”

Because the sleek dispenser is designed to sit on a countertop, Mills says customers are more apt to use it. The pair developed different formulas for men, women, and children, as well as supplements for different needs such as added energy, focus, or sleep.

Once a customer places a disc in the machine, they push a button to activate the dispenser. In the rear of the machine is a small tank where water is added. Once it’s mixed with the powdered vitamins and minerals, the formula is dispensed in a small drinking cup. In addition to their basic formula, the team developed different flavors that appeal to children.

Striving to work with as many Michigan-based companies as possible, the pair turned to Future Pak in Wixom to fill the cartridges, while Datapak Services Corp. in Howell does the fulfillment. Meanwhile, working with a team at Northern Michigan University, Tespo has developed a device to easily dispense a vitamin cartridge for people who travel.

“We feel like we have a tiger by the tail,” Mills says. “We did a trade show in Atlanta not long ago, and most people thought it was a juicer. It drew a lot of attention. We also were contacted by a large manufacturer of appliances, and they said, Congratulations, you created a product that didn’t exist.”