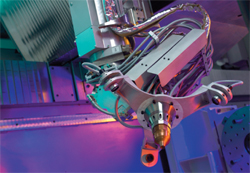 A damaged mold or die at an automotive plant in Vietnam could shut the production line down for hours or days, costing time and money as workers scramble to locate a replacement part. Or a cracked propeller can render a naval ship patrolling the Persian Gulf useless until repairs are made.

With just-in-time-delivery processes adding further pressure to maintain production schedules, manufacturers have long bit the bullet and maintained up to 30 percent of their plant space for spare parts. But an industrial revolution may be at hand.

An Auburn Hills company called POM Group Inc. (Precision Optical Manufacturing) has developed a system where an industrial laser controlled by a computer heats powdered metal to create, modify, or repair parts. The system, which can be operated via satellite, is housed inside a protected compartment the size of a backyard storage shed. The compartment can be placed inside a factory, ship, or truck.

“If a part broke on a naval ship and it was equipped with our machinery, we could control the creation or repair of the part from our offices here via the Internet,” says Jyoti Mazumder, CEO of POM Group. “We’re just now introducing the technology to the world, and we’re receiving numerous orders to repair or modify machine parts.”

The rising cost of metals, fueled largely by an industrial expansion in southeast Asia, helped spur Mazumder and his 21 employees to develop the system. After posting $4 million in revenue last year, Mazumder projects sales will double this year, and climb to $14 million next year. “The automakers and their suppliers are coming to us to repair or modify molds and dies,” says Mazumder, a professor of mechanical engineering and materials science at the University of Michigan in Ann Arbor. “Why re-create the wheel when you can rebuild it faster and cheaper?”

The company has received 15 patents for its manufacturing process, while several more patent applications are pending. The technology stemmed from a joint research project with U-M that was funded by the U.S. Department of Commerce.

Currently, the United States military is POM Group’s largest customer, while other clients include the Detroit Three automakers and their suppliers. “We just received a contract from the U.S. military to produce a single crystal turbine blade for use in high-efficient jet engines,” Mazumder says. “Right now, building the blade is a very slow process because you have to create a mold, but our system has the ability to create parts right from CAD drawings loaded into a computer.” The streamlined process can reduce production times by 50 percent or more.

The company is also working to train personnel with Focus Hope, a Detroit-based education and training center. “We need to prepare for our growth,” Mazumder says.