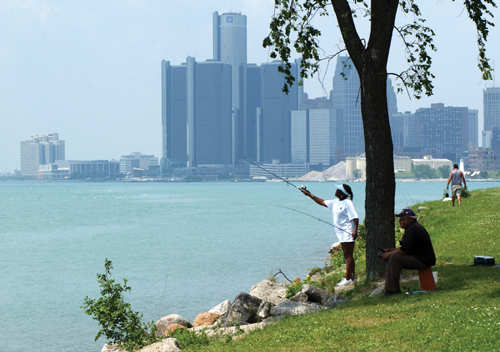 Texas has oil, West Virginia has coal, and Iowa’s soil is ideal for growing corn and soybeans.

Then there’s Michigan, which, in addition to possessing robust manufacturing and agricultural sectors, is surrounded on three sides by fresh water.

The Great Lakes comprise 20 percent of the entire earth’s fresh surface water, a resource that’s in heavy demand throughout the world for everything from fishing to recreation to energy to basic human survival.

Michigan has more of it than anyone in the world, and nowhere is the water’s economic potential more promising than in the Huron-to-Erie Corridor, which stretches from the southern end of Lake Huron through the northern tip of Lake Erie. It encompasses the Detroit and St. Clair rivers, as well as Lake St. Clair, which may not be a “Great Lake” technically but is considered a world-class recreational and fishing body. 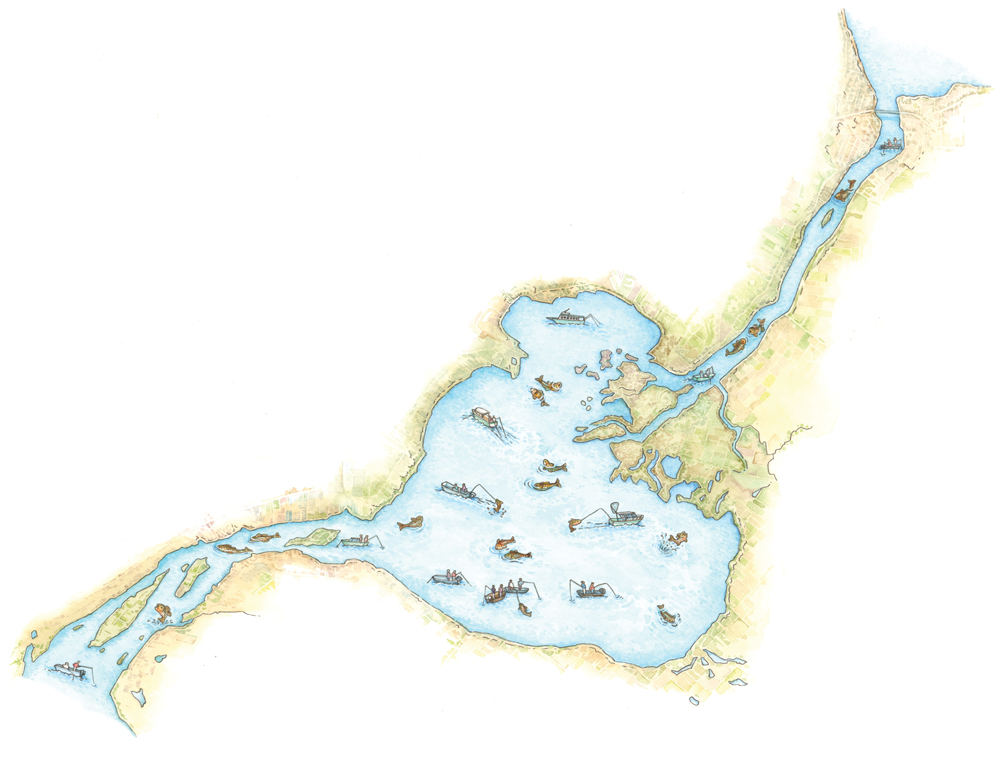 In fact, the Huron-to-Erie Corridor may be one of the region’s most underappreciated and unrealized economic juggernauts. That’s starting to change, though, as communities bordering the corridor — along with the state of Michigan — have started to aggressively market the unique basin that’s home to 65 species of fish. It also is one of the busiest navigation channels in the United States.

“This system is incredible to fish because of the abundance of fish and the opportunity to catch such a variety of species,” Thomas says. “At my DNR office, I get more and more inquiries from out-of-state folks about making a trip here to fish.”

According to the DNR’s 2016 Lake St. Clair creel survey, 19 percent of anglers on the lake that year were from outside Michigan. The visitors largely came from Ohio, Indiana, and Kentucky, but some came from as far away as Arizona and California.

Lake Erie held its own, as well, with 113,000 boat angling trips on the Michigan portion of the lake during 2016, and 1.2 million fish harvested. Lake Erie has averaged 500,000 angling hours per year during the April-to-October timeframe, and while Lake Erie is considered the walleye capital of the world, it was yellow perch that stole the show in 2016, with catch rates double the long-term average. 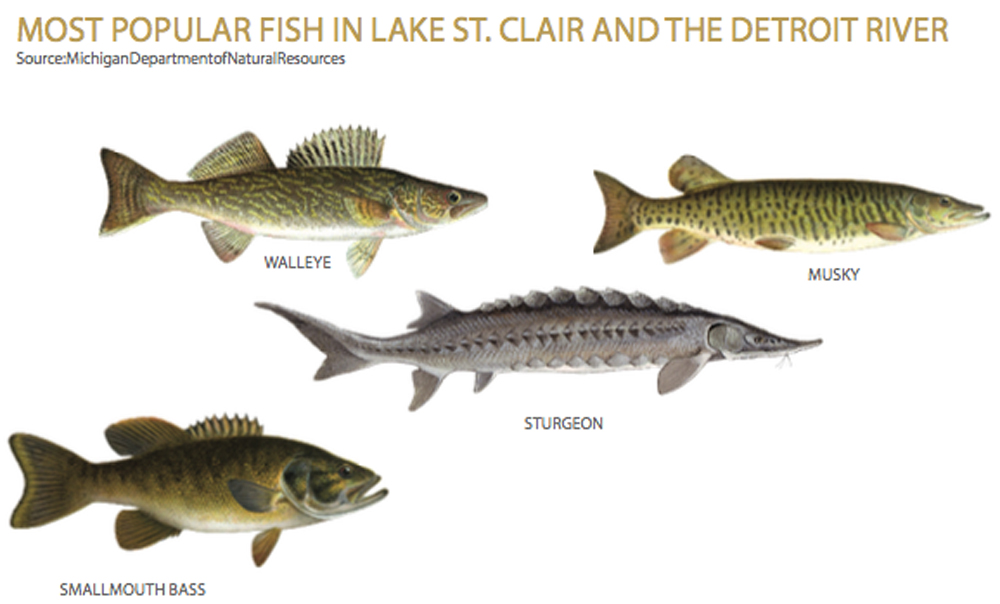 The Huron-to-Erie Corridor is one of the most active fresh water fishing basins in the world. According to the Michigan Department of Natural Resources, more than one million fish are caught during April-to-September daylight hours, and $36 million is generated annually by boat and ice fishing on the Detroit River and Lake St. Clair.

There’s no questioning the appeal of the Huron-to-Erie Corridor or the respective waterways’ capacity to host recreational activity. Taking full advantage of that capacity, of course, requires sufficient focus on infrastructure such as docks and canal walls, maintenance, and marketing.

Gerard Santoro, program manager of land and water resources for Macomb County, says the 2008 global financial crisis served as a catalyst for the county to take stock of its water resources and better nurture the entire basin. “Here in Macomb County we realized we had a few things working in our favor, which we hadn’t realized until we started looking at them, really, on a world scale,” Santoro says.

That includes 32 miles of coastline, more than 70 operating marinas, and 16,000-plus boat slips. “Those are pretty amazing numbers considering we’re a six-month season at best,” Santoro says. “But we’re also the area that sort of strapped the boaters onto the boat and created the recreational boating industry, so we’re the incubator. We’re also a mainstay in recreational boating nationwide, so we feel that’s part of our economy that doesn’t really get much attention.” 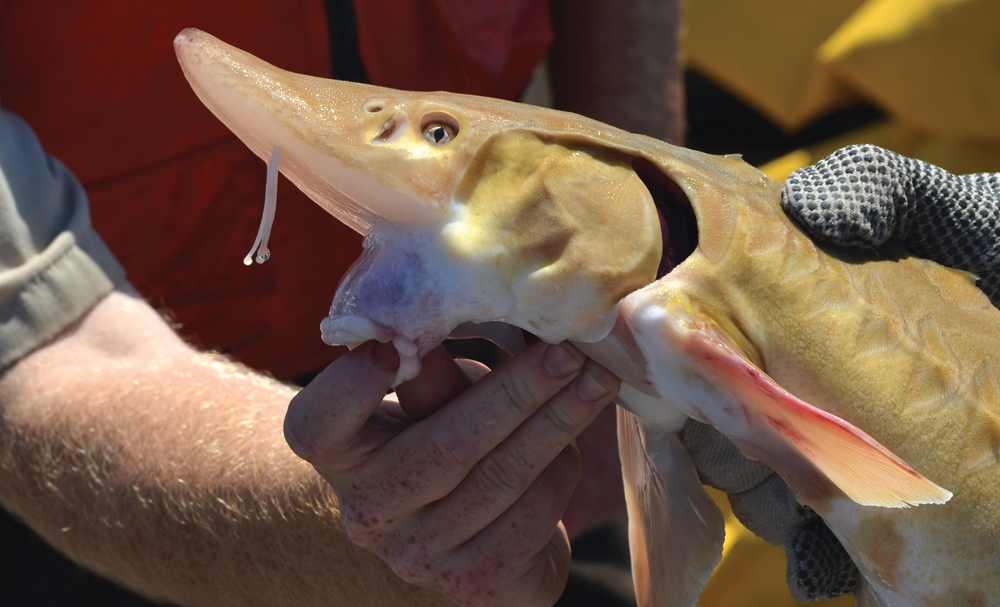 To help benefit from that advantage, Macomb County is working on a Lake St. Clair tourism initiative to draw more events like the Fishing League Worldwide Tour. It will occupy Lake St. Clair from June 28 through July 1, with sponsorship from the Detroit Sports Commission, the county, the Huron-Clinton Metroparks Authority, and the Sterling Heights Regional Chamber of Commerce.

Lake St. Clair Metropark will serve as the home marina for the event, and Santoro says Macomb County will host the Bass, Brews, and BBQ Festival to coincide with the fishing action. The FLW Tour is expected to draw dozens of anglers from around the Midwest, as well as several hundred spectators. The tournament will be televised nationally on NBC Sports Network.

The tourism initiative is also part of an ongoing effort called the Blue Economy, which was launched in 2012, in part at the behest of Gov. Rick Snyder. The idea, often called blue accounting, was to take a new look at whether fresh water was being sufficiently leveraged as an economic asset.

“Blue accounting is where we’re accounting for the metrics of our fresh water, and what that means for our place in the world,” Santoro says.

The Blue Economy initiative released a full report in 2014. One of its recommendations was for the state to establish more water, education, research, and innovation centers, in the hope they would spur solutions to local, regional, and global freshwater problems. 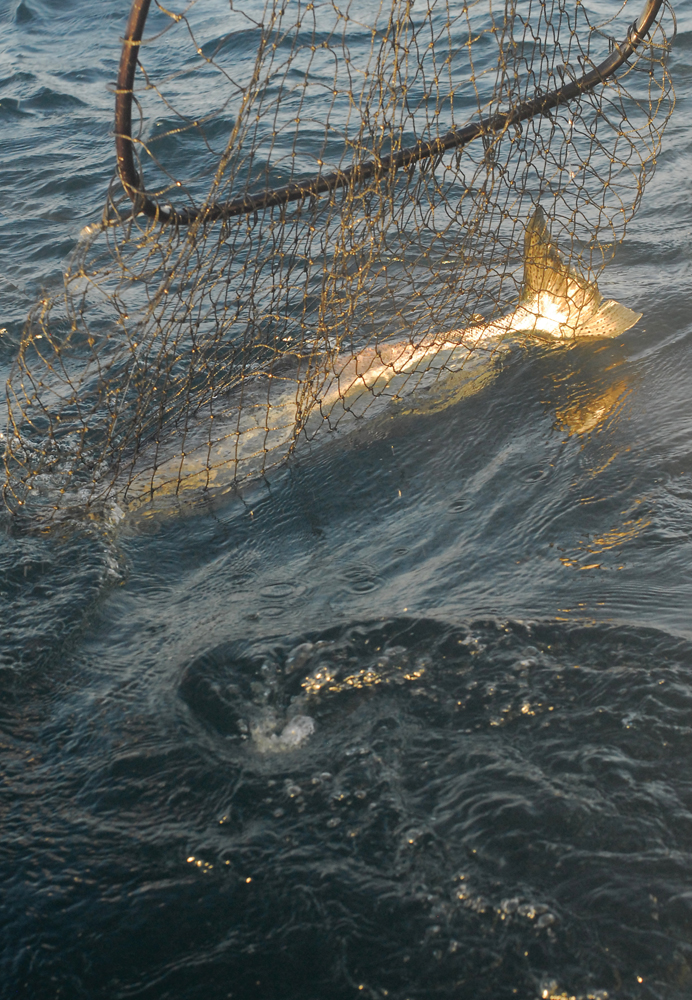 There are plenty of challenges to address. Ecosystems are fragile, and at times need restoration. Pollutants reduce the appeal and usefulness of the water, particularly the plausibility of converting water to clean energy. And, of course, it’s complicated to get clean, fresh water to people who need it in remote parts of the world.

A regional economy built on a determination to do all this can benefit from a lot more than boating and fishing, lucrative though those activities may be. It can employ wastewater technicians, engineers managing ecosystem restoration projects, and scientists attacking the pollutants in the water.

The water-connected industry has enormous economic potential, but there are limits. Two decades ago, regional leaders and public officials in Detroit recognized that the riverfront was characterized almost entirely by industrial-type uses, to the exclusion of more attractive public spaces that could make the city’s water-connected areas more attractive to people with money to spend.

That prompted the formation of the Detroit RiverFront Conservancy to transform the water’s edge at the central business district and beyond from an underutilized asset to a major attraction. Since 2003, when the conservancy was formed, three cement silos that dominated the riverfront have been dismantled and replaced by the RiverWalk, gardens, plazas, fountains, an adventure park, and more.

“Investment in public spaces along the river has yielded tremendous results in terms of economic development,” says Mark Wallace, president and CEO of the Detroit RiverFront Conservancy. “Waterfront parks have really become the modern version of infrastructure, and investment in something like the RiverWalk is, in some ways, every bit as impactful as investment in a freeway or a bridge in terms of changing the value of adjacent property.”

Wallace says the Detroit River was once seen as little more than a liquid highway for industry and fishermen, but since 2003 more than $1 billion has been invested along the waterfront, from the Belle Isle Bridge to the Ambassador Bridge, to make the shoreline a major public space. A second $1 billion will be invested over the next five years. 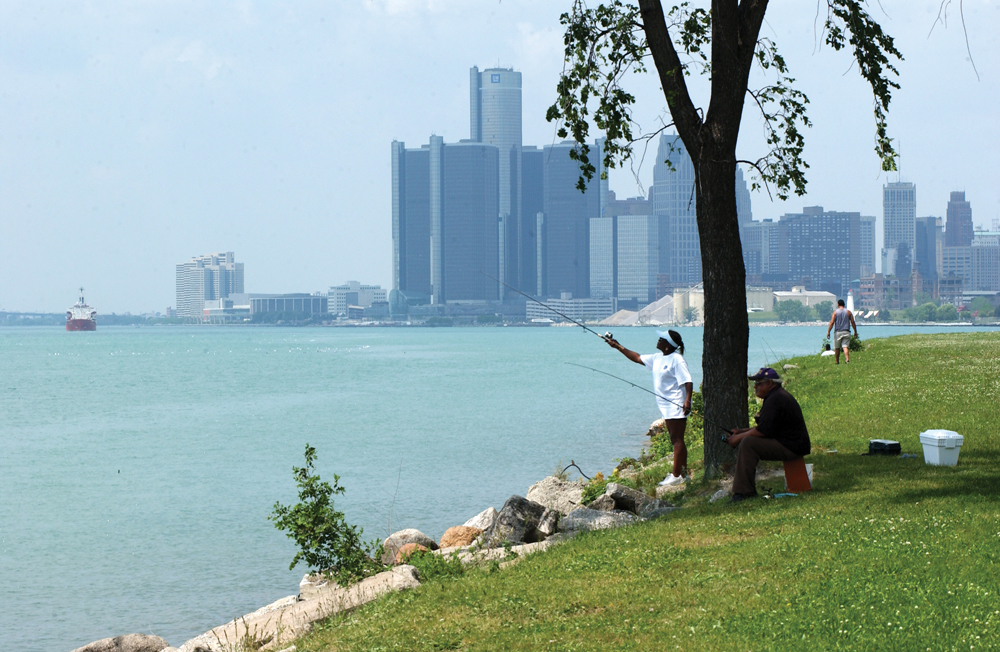 Local, national, and international anglers take to the Huron-to-Erie Corridor every year from late March to October in pursuit of walleye, small mouth bass, sturgeon, musky, and other fish. The Michigan Department of Natural Resources reports there are 350,000 water-dependent industries in Michigan, with a combined $21 billion in annual revenue.

“We’ve always known we wanted to measure our impact along two verticals,” Wallace says. “How does the RiverWalk change people’s lives on a daily basis? The outcomes are increased health and interaction with nature, a peaceful gathering place, and breaking down demographic barriers. And we measure ourselves by the economic impact of the work we do.”

The conservancy estimates that annual public spending by visitors, residents, employees, and other operations along the riverfront has reached $43.7 million, with some 3 million visitors drawn to the riverfront each year. Many attend regular festivals like River Days and concerts held along a waterside plaza at the Renaissance Center.

The conservancy also projects the RiverWalk and its related activity generates $4.5 million annually in tax revenue, including $1 million from city income and hotel levies. On the job front, improvements to the riverfront are estimated to have supported 16,700 construction jobs as well as 1,300 permanent positions.

Similar efforts on other parts of the Huron-to-Erie Corridor reflect the understanding that the waterway can only fulfill its economic potential if there’s infrastructure sufficient for people to enjoy it. For example, the cities of St. Clair, Marysville, and Marine City recently completed upgrades that offer better access to the St. Clair River. St. Clair County, meanwhile, has embarked on an effort to upgrade access to its 16 water trails. 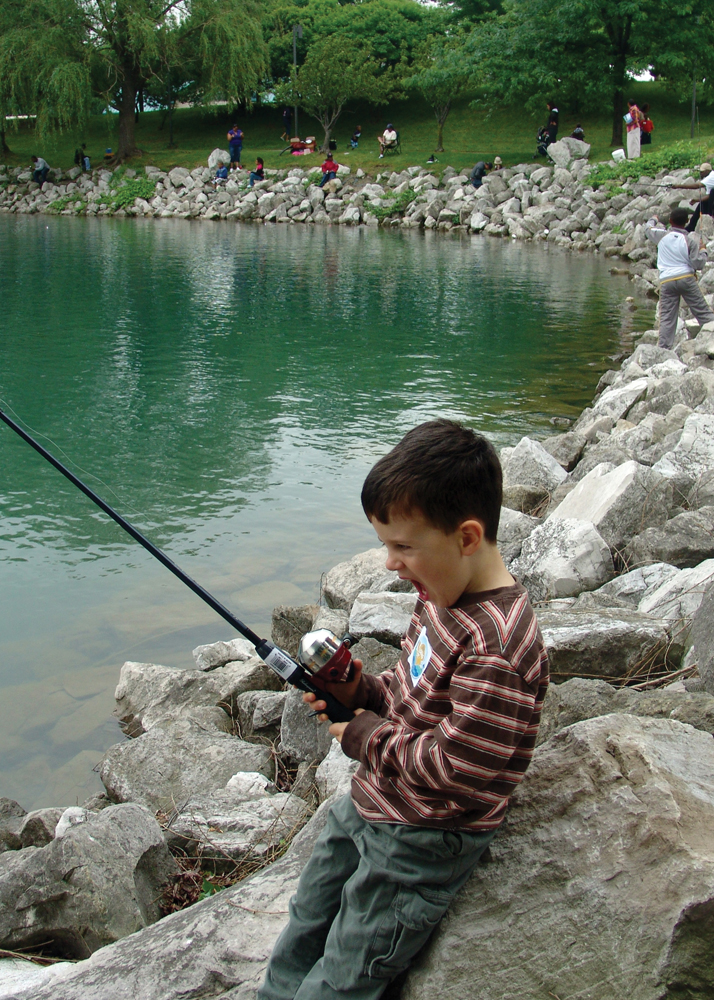 Known as the Blueways of St. Clair, the project began in 2010 with a federal grant that lasted until 2012. The effort didn’t stop there. A key to the initiative was to find out from paddlers how and where they use the water trails. “We had people mark on the maps their access points, via a smartphone, where they get in and where they get out. They also had names for some of those points,” says Lori Eschenburg, project manager for the Blueways of St. Clair. “We ended up with 16 access points, which was a lot. We should have started with two or four, like most people, but we have 16. So it took off, and it wasn’t just a project we wrapped up and were done with.”

The economic impact of the water trails is hard to quantify, according to Mark Brochu, director of parks and recreation for St. Clair County. But, he adds, there’s plenty of visible evidence the investment effort is bearing economic fruit. “We’re seeing people coming into town with kayaks on the weekend,” Brochu says. “We’re also hearing from our economic development people about the quality-of-life issues that are part of the overall business attraction program.”

If the economic potential of the corridor is undeniable, what are the challenges and the limits?

The challenges clearly start with the potential for harm to both the water itself and fish habitats. The Blue Economy report stresses the need to deal with problems like algae bloom, which impacts water quality, drinking supplies, and fisheries, as well as invasive species like the zebra mussel.

“We face big water problems in our region and abroad that require complex solutions — solutions that can be developed through partnerships and collaborations in research,” says Brittany Affolter-Caine, project manager for the University Research Corridor, whose members include the University of Michigan in Ann Arbor, Wayne State University in Detroit, and Michigan State University in East Lansing. “This is our big opportunity to positively impact the economy and the environment.”