“Same Old Lions” is a refrain heard on sports talk radio programs many Mondays during most football seasons. It means the boys in Honolulu blue and silver have found yet another creative way to lose a game and break fans’ hearts. But they’re not the same old Lions, not by a long shot.

When the Detroit Lions were acquired on Nov. 22, 1963, by the late William Clay Ford Sr. during a meeting at the downtown Statler Hotel, the price tag was $6 million. Today, Detroit’s National Football League franchise is worth $2.1 billion, according to Forbes.

As great an investment as Ford’s $6 million appears to be, of the 14 teams that were in the NFL at the time, the Lions are now ranked last; they’re 30th of the 32 teams currently playing. By contrast, the Dallas Cowboys lead the league at $5.7 billion, followed by the New York Giants at $4.3 billion, and the San Francisco 49ers at $3.8 billion.

That Detroit is the nation’s 14th-ranked media market, with 1.7 million homes, is a factor in the team’s value. The No. 1 market, New York, has 7.1 million homes, while No. 2 Los Angeles has 5.2 million homes. Also playing a role is the team’s performance on the field. Since 1964, the Ford family’s first full season of ownership, the Lions are the only team that was in the league at the time that hasn’t been to its championship game, the Super Bowl. The team’s record since 1964, going into the 2020 season, was 314-455-15.

By contrast, the Cowboys and the Pittsburgh Steelers have each been to the big game eight times. The 49ers have been there seven times. The Washington football team, the Giants, and the Green Bay Packers each have made five Super Bowl appearances. Even the St. Louis/Arizona Cardinals have played on the game’s biggest stage.

The Lions’ first campaign under the Ford family’s ownership in 1964 resulted in a 7-5-2 win-loss-tie record. The team’s best season was in 1991, under head coach Wayne Fontes, when it went 12-4 and beat the Cowboys 38-6 in the team’s only playoff victory since 1957. Ultimately, the Lions succumbed to Washington 41-10 in the NFC Championship Game, one game away from the Super Bowl. The Lions’ overall playoff record during the period of Ford ownership is 1-12.

In that time, the Lions have had 18 head coaches and eight general managers, including Russ Thomas (1967-1988) and Matt Millen (2001-2008), who most sports talk radio pundits say are the worst two GMs in NFL history.

Many people think that perhaps management is to blame for the team’s relatively low value.

“I’ve interacted with (Detroit Lions) people on the business side and they’re solid,” says Michael Dietz, CEO of Dietz Sports and Entertainment in Farmington Hills. “They have a lot of talented employees. They make the sales calls and they compete for the entertainment dollar in a competitive market.

“If you’re looking at a $6 million investment going to $2 billion, I’d say nothing’s wrong. The value is going up. Team performance is only one factor in coming up with the value (of a sports franchise).”

“Sports teams are very interesting,” Conway says. “The most accepted valuation model is called discounted cash flow, (but) you can’t really use that methodology with sports teams because if you look at the Lions, with $40 million or $50 million in operating income, there’s no way you get to $2 billion.

“The value of a team is only what someone will pay for it,” he says. “Buyers will come for a pro sports team. It’s not like putting Joe’s Tool and Die Shop up for sale and hoping for a buyer. You put (the Detroit Lions) up for sale and who says you don’t get $3 billion? If you get three rich guys and they can all write a check, you’ll get your $3 billion.

“Winning would increase the valuation,” Conway adds. “In a normal business, if you lose and are projected to lose in the future, it’s not worth anything. That’s not true with sports franchises. Losses and income don’t affect the value that much. Winning would mean playoff games, which is extra ticket and advertising revenue. Winning (would) allow them to charge more for (regular season) tickets and suites, and that might be significant.”

There’s also potential revenue that could be generated by local radio and pre-season television contracts, sponsorships, parking, and concessions for a winning team, according to Dietz.

The primary driver of the Lions’ value and that of the other NFL franchises, though, are the national television contracts negotiated by the league and shared equally with all of its teams.

The lion’s share (pun intended) of that comes from TV contracts. CBS, NBC, and Fox are paying a combined $3.1 billion for broadcast rights until 2022. Fox paid an additional $3.3 billion to air Thursday night games from 2018 to 2022. ESPN paid $15.2 billion in 2014 to broadcast Monday Night Football through next season. That amounts to about $255 million per team per year, according to lwosports.com.

“That deal comes up for rebid in a couple of years and it could be double what it is now,” Conway says. “Other sources of income can ebb and flow with performance. What doesn’t ebb and flow is the income from the media contract. The year they went 0-16, they were probably still profitable because of their share of the league media deal.” 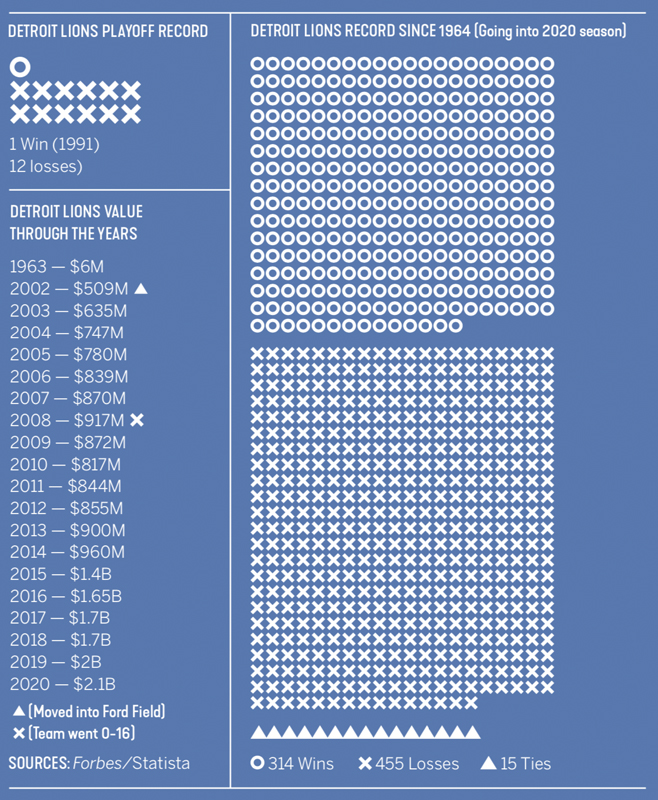 Another source of income the league shares with its teams consists of official sponsorships. Verizon pays the league $300 million, Anheuser-Busch is in for $230 million, Nike is at $120 million, Pepsi pays $100 million, Oakley gives the NFL $75 million, and Amazon pays $75 million, according to lwosports.com.

Teams also have local sources of income. In addition to those already mentioned, there are deals on stadium names, stadium advertising, and merchandise licensing. The average NFL team makes about $7 million per game from ticket sales. With eight regular season games, that comes to about $56 million. The home team keeps 60 percent of gate receipts and 40 percent goes into a league pot. New sources of income on the horizon include streaming and gambling websites.

On the expense side of the ledger, NFL teams are fortunate to have player salary caps. In 2020, teams couldn’t spend more than $198.2 million on player salaries. The Lions are $47.58 million under the salary cap for this season.

“The salary cap is music to the owners’ ears,” Conway says.

When Ford acquired the Lions in 1963, they were coming off a decade of gridiron domination. The Lions won three NFL titles in six years during the 1950s, the last coming in 1957. In 1958, the team traded star quarterback Bobby Layne to the Steelers for Earl Morrall. Layne was said to have put a 50-year curse on the team — which, if you believe such things, has lasted 62 years. 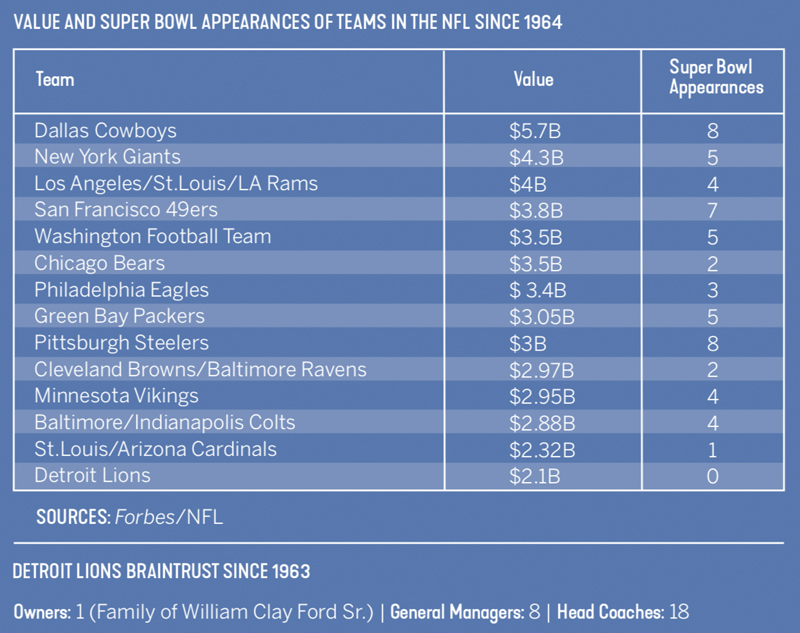 One factor of team value is the stadium in which it plays. The Lions have upgraded their stadium twice during the Ford family’s ownership. From 1964-1974, they shared Tiger Stadium with the Detroit Tigers. They moved to the Pontiac Silverdome in 1975, and stayed until the 2001 season. Since 2002, the Lions’ den has been Ford Field in downtown Detroit.

The Lions’ operating income is $43 million, according to Forbes. The operating income of the No. 1 Cowboys is $425 million. “To get to the top half, you’ve got to generate more than $100 million,” Dietz says.

“Much of the revenue stream for NFL teams is effectively equal,” Leeds says. “They share TV, online, and merchandising revenue equally (the Cowboys are a mild exception with merchandising), and gate revenue is close to equally distributed. That largely leaves venue revenue as the big differentiator.”

Venue revenue comes from things like signage, parking, and — especially — luxury seating. “Arguably, luxury boxes are one of the main reasons why NFL teams have moved over the last decade or so,” Leeds says. “Thus, I see the biggest likely contributor to the Lions’ market value being enhancements of their venue revenue, especially if the enhancements are publicly funded (more revenue, less debt and cost). Whether that’s a good thing for Detroit and Michigan is another matter.”

Some of the loudest Lions critics on sports talk radio pin the team’s woes on the ownership. They frequently opine that the team’s only chance for success, and the resulting increase in value, is for the Ford family to sell the franchise. Some fans say the Fords only care about the increasing value of their asset. As an investment, the Lions are performing well for the Ford family.

“The real value is the appreciation,” Conway says. “If you bought the Lions for $6 million and lost $20 million a year for 50 years, you’ve lost $1 billion. Now if you sell it for $2 billion, you still make $1 billion.”

According to Dietz, the Fords aren’t just in the NFL to make money. “I know they want to win and are desperately trying to win,” he says. “The NFL is a tough league in which to win. Most games are decided by a touchdown or less.

“There are a lot of reasons to own a sports franchise,” he continues. “One of them is to hope it goes up in value, but most owners know that owning a pro team is a community asset. All the sports team owners in Detroit take that community commitment seriously. Selling tickets and merchandise is important to the Lions ownership, but so are participating in the rebirth of Detroit, (advocating for) social justice, and being involved in the community. Owning the Lions allows the Ford family to really participate in the community and all the things that are great about our city.”

Dietz points to the team’s $10 donation per ticket to the Eastern Market, its support of Detroit PAL, and the Detroit Lions Academy, an alternative middle school for Detroit students, as evidence of its commitment to the community.

Another intangible that doesn’t appear on the balance sheet is fan loyalty.

“The Lions fans are blindly loyal, and I marvel at that,” Conway says. “You’d think after winning only one playoff game since the Ford family took over, the stadium would be half-full.”

According to Dietz, the reason the fans are so loyal is because football in general is big-time entertainment. “Football is always among the top-rated TV programs nationally. The Lions’ ticket pricing is on the lower end of the NFL, so there’s value. Ford Field is fun to go to. There’s a reason they say football is king.”