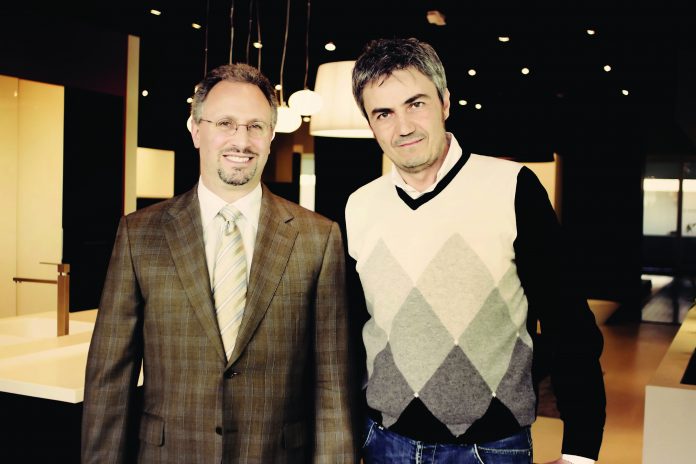 Robert Nusbaum knows firsthand that dealing directly with the factory has its drawbacks. Coming from New York Carpet World, a distributor of household floorings in Detroit that eventually grew to 250 stores, Nusbaum knows that clear communication with customers is paramount to success.

After the company — founded by his father, Irving Nusbaum, and Marvin Berlin in 1967 — was sold in 1996, Robert spent time building luxury residences in Birmingham and elsewhere before investing in Troy-based Berloni America, part of Berloni S.p.A., a large industrial group in Italy. The manufacturer has been distributing kitchen, living room, and bedroom sets for more than 50 years.

“Right away, as we looked to expand the dealer network in the U.S., people were saying how difficult it was to work with the factory in Italy,” says Nusbaum, president and CEO of Berloni America. “The language barriers were holding back the company, so we had to find a way to reinvent the business.”

Rather than have dealers call on the factory, Nusbaum and Roberto Berloni, general director of Berloni S.p.A., established a U.S. headquarters and showroom in Troy in 2009. “We simplified the pricing and ordering process, guaranteed delivery times, and began to offer more kitchens — which, right now, is 90 percent of our business,” Berloni says.

After seeing U.S. sales improve by 20 percent last year, the pair aims to have 200 dealers across the country by 2014, up from 30 dealers today. What’s more, the company is bidding to be a larger player in outfitting residential projects, from high rises to single-family homes.

Most recently, Berloni kitchens and furniture sets were installed in Zaragon Place, a 10-story, 248-unit luxury apartment building in downtown Ann Arbor. Other projects are under way in New York, Chicago, and up and down the West Coast.

To help reduce costs and streamline operations, Nusbaum set up a small milling shop at the Troy headquarters to improve the delivery of replacement components and special orders. The company also keeps inventory to a minimum, to save on rent. On average, it takes about 12 weeks for a kitchen to be produced in Italy and installed in an American residence.

“Initially, my plan was to invest in Berloni America and work on other things,” Nusbaum says. “But the more I got into it, the more it reminded me of my days at New York Carpet World. I think like our dealers, so I understand their needs better than the manufacturer. And there’s no more language barriers.”