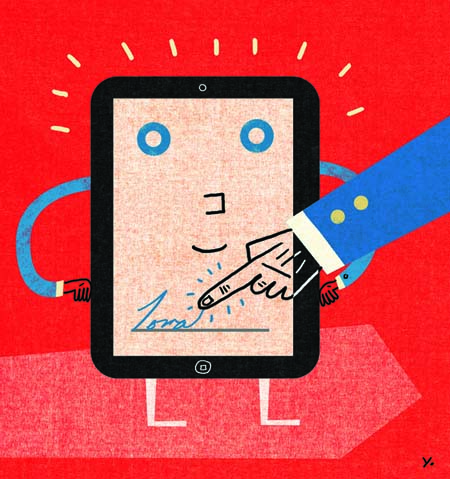 With 30 million small businesses in the United States, it can be difficult to stand out — but a Southfield firm has found a way. “I wouldn’t say we’re in a saturated market, but if you can hitch a ride with a larger brand, it really gets the word out,” says Scott Bade, president of ImageSoft Inc.

Founded in 1996, ImageSoft was borne of opportunity. A trio of software engineers joined forces, believing they had a better way to digitize the millions of documents that pass through medical centers, universities, courts, and insurance firms each year.

“We’ve all been there where someone goes on vacation and no one can find a particular document, or it’s lost altogether,” Bade says.

The company, with 55 employees, develops electronic storage systems for dozens of clients in North America. A judge reviewing a complicated paternity case, for example, might never review a physical file. The company also offers a secure platform for electronic signatures — with the right password, a user can sign their name to an iPad screen using just a finger.

“For those who are reluctant to try electronic signatures (or e-filing), I would suggest thinking about the amount of time you and your staff spend carrying and carting around paper files and orders, and all the delay that paper-shuffling creates,” says Ottawa County Circuit Court Judge Jon A. Van Allsburg.

“Remember the old adage that justice delayed is justice denied.”

Bade says the company’s proprietary document storage system allows users to be as much as 30 percent more efficient. Clients include more than a dozen court systems, Henry Ford Health System in Detroit, and Spectrum Health in Grand Rapids.

To reach revenue of $40 million in 2016, ImageSoft recently moved to larger offices in Southfield. The space offers 12 conference rooms, up from two in the previous facility. “We do a lot of training, plus we wanted to offer more amenities like an exercise facility for our employees,” Bade says. “A fit workforce is an efficient workforce.”