By June 2014, when Jay Adelson co-founded Center Electric, his technology venture capital firm, he’d already launched a half-dozen startups in 20 years and earned a reputation as a “serial entrepreneur” — never mind being chosen in 2008 as one of Time magazine’s “100 Most Influential People in the World” in the Builders and Titans category.

Adelson is both baffled and amused by his accomplishments, because he readily admits he still regularly hears a voice inside his head taunting him with this refrain: “I’m not qualified!” He then hastens to add that his path to unimaginable success didn’t get off to the most auspicious of starts.

“When I was 3 years old, my mom discovered I couldn’t see a thing,” he says. “I had the worst farsighted eyes. So starting then, I had these enormous Coke-bottle glasses. (When you’re in school) … you’re labeled one of two things, or both: One, you’re a nerd, and two, people assume you’re smart, even when you aren’t. I also think I had ADHD.”

A significant milestone in Adelson’s life came very early, when he was in the third grade at Adlai E. Stevenson Elementary School in Southfield. “That’s when a miracle happened,” he says. “I mean, there’s no other way to put it. I had this teacher named Jewel Anderson. She passed away in 2010, but I still talk about her all the time. She had the presence of mind to say to my parents, ‘I think Jay is insecure and bored and distracted. Maybe it would make sense to consider a school that challenged him a little bit more.’ And that (school) was Cranbrook (in Bloomfield Hills).”

“I was a mediocre student,” Adelson admits. “I nearly failed math, but I was really into writing and the arts. The school maintains this connection to the arts, (and believes) that it’s equally as important as academics or athletics. Thank God for that, or I would have been dead there.”

It didn’t take long for Adelson’s artistic passions to take hold and surface.

“I loved film,” he says. “I won the Michigan student film festival in my age group when I was 10 years old. My film was called The Invisible Man. Where but Cranbrook are fourth-graders making films? Later, I ran the school radio station. I was really into that.”

But Adelson determined that focusing solely on film or radio in the next stage of his education, at Boston University, wasn’t an option.

“I was really confused,” he says. “I knew I liked elements of filmmaking, but probably was not a writer/director. And if I called myself a writer/director, it’s like, What the f— are you going to do after graduating? Nobody’s going to hire you! I was hearing that voice — ‘I’m not qualified!’ — and (I was) worried about being able to eat when I graduated, so I stayed in the film program, but ended up taking almost the entire computer science course load on the side. I learned the fundamentals of technology and data communications, and I found that what I was good at was audio engineering — and I could get paid to do it.”

One of the side benefits of the computer science curriculum was access to BU’s computer lab. “That gave you an email account on the research-only internet that existed in 1988,” Adelson says, “and I had a lot of really talented technology friends who were saying, ‘Hey, if you really want to get work in film, there’s this message board called the Usenet that’s worldwide. Every university in the world is connected to it, and engineers who are in the audio business have their own group and you can go onto this message board and see posts from sound mixers, acoustical engineers, and post-production people all over the world.’ ”

Initially, Adelson assumed the newfangled method of corresponding was limited, even exclusive. “The problem is, I’m a nerd,” he laughs, “and I was always a little bit concerned that maybe the only people that would find this concept appealing were nerds. And that’s a small population, right? You had to find these guys. Like, how many people are going to want a connection to the internet and want an email address like me? You don’t know.”

That perception dramatically changed in 1989 with another seminal event in Adelson’s life: Tiananmen Square.

“That image of a lone man standing in front of a line of tanks, the photo that moved the world,” he says. “No reels of film needed to pass a border, no recordings had to be secreted through a checkpoint, just email messages moving at the speed of light. No borders, no limits — changing the world. And this idea fascinated me!”

Adelson was also intrigued by an offer he’d received from one of his Usenet contacts, an engineer at Skywalker Sound — the revolutionary sound design facility conceived by George Lucas, creator of the Star Wars and Indiana Jones franchises. “And he’s saying, ‘If you want to come out to California after you graduate, we can get you in as an intern,’ ” he says. “You can imagine how freaking awesome that was! So I got the internship, packed the car, and went to California.”

Adelson’s stint at Skywalker was short-lived, and his enthusiasm for a career in the filmmaking business dwindled as what he calls his “inner geek” began to consume him. He couldn’t get the Tiananmen Square experience out of his head, and he was intrigued and fascinated by the potential and power of delivering all kinds of information instantaneously, through what was then widely known as the World Wide Web.

By 1993, just one year after graduating from BU, he moved back to California and took a job with Netcom in San Francisco. It was one of the first global internet service providers, and was at the forefront of the fledgling movement toward shifting communication through the internet from gigantic computers in university labs to more compact, individually owned personal computers, or desktops. Adelson thrived at Netcom, initially as an installation coordinator and then overseeing virtually all aspects of the business, from engineering to operations to customer service.

It turned out to be the beginning of his odyssey as a wildly successful internet entrepreneur, building what became a string of companies over the next 20 years — Equinix was first, followed by Digg, Revision3, SimpleGeo, and Opsmatic. All either went public or were purchased by other corporations. While that streak of the Midas touch cemented Adelson’s reputation as a startup savant, he energetically pleads otherwise.

“I never think a billion-dollar company is going to be the result of my desire to solve a problem,” he says. “I just get frustrated that no one is taking advantage of an incredible opportunity for the advancement of a particular technology or field, whatever it is. I figure the worst thing that can possibly happen is I can fail. And while I’m doing it, I’m my own boss and I get to learn about something that’s really interesting to me. At the very minimum, if I don’t achieve on the business side, I at least get some kind of immersion in something I love that makes me happy and satisfied.” 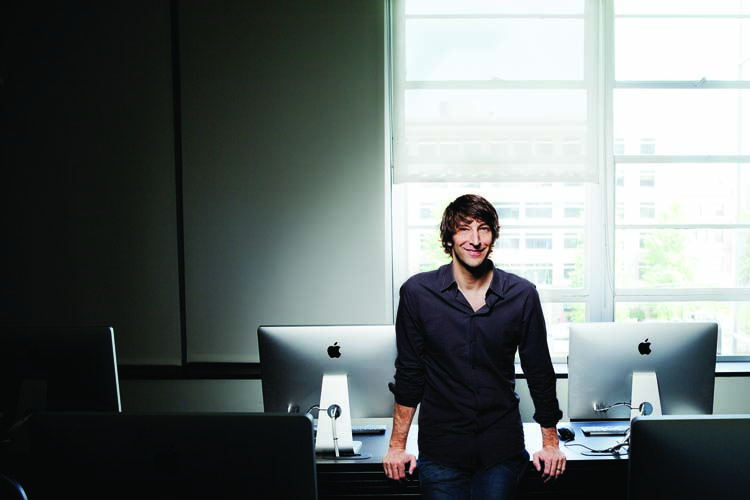 Adelson, 46, seems to have cracked the code. He’s stunningly centered, humble, and down to earth; he does, indeed, appear happy and satisfied; and he has had very few, if any, significant business failures. Center Electric, his current endeavor, is no exception. The name of the company pays homage to his great-grandfather’s electric supply business on Eight Mile Road, which sustained three generations of the family through four decades. It also left Adelson with, as the company’s website states, “the fundamental belief that a business need not compromise a strong moral compass to achieve amazing things and incredible success.”

Adelson’s connection to those early years in Detroit are clearly powerful, and while he still lives and works in the San Francisco area, he gets back several times a year to visit his family. “I go downtown and I see what’s going on,” he says, “and I’m incredibly optimistic. What I see is, very slowly, the population of Detroit and the suburbs moving from a sense of entitlement to a sense of opportunity. That’s a slow process, but it’s cumulative, and it will eventually lead to a turnaround in the city.”

Adelson also devotes time to giving back to his hometown.

“I mentor entrepreneurs and help people start businesses,” he says. “I’ve been working a lot with the folks at Detroit Venture Partners (a venture capital firm) and with Ted Serbinski at Techstars Mobility, trying to be available in a way Silicon Valley entrepreneurs and capitalists are typically not to people in Detroit. And when there’s a Detroit startup that’s trying to navigate the mess out (here), one of my greatest joys is helping them game that system.”

“I want to be Jewel Anderson,” he says. “I want to teach. It’s what I love most. Right now, as a mentor, I’m reaching people too late in their development. It’s not where I want to be. I want somebody to be interviewed one day and say, ‘That one class I had with Jay made me feel better about myself … gave me direction, (and) that was impactful.’ That’s what I want. So there will be a point where I’m teaching high school. It might be another 20 years before I get to it, but it is going to happen.”