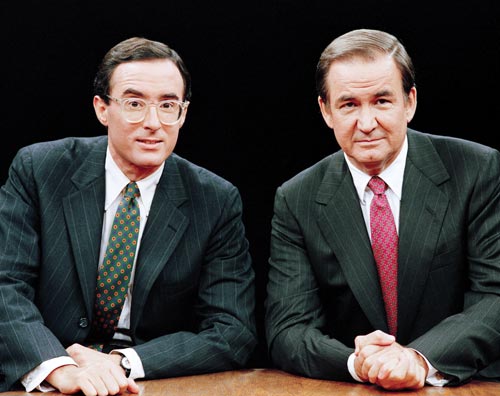 A national journalist, commentator, television host, and political pundit, Michael Kinsley’s memories of his childhood years in Detroit are recalled with impressive clarity.

“I grew up on Renfrew Road,” he says, adding the precise address. “It was close to Eight Mile and Livernois. The neighborhood was completely segregated. There was a black neighborhood and there was a white neighborhood side-by-side, and that was the school district. I went to Louis Pasteur Elementary. Looking back, it was just amazing — my school was mixed, extremely so, 50-50 — but residentially, it was entirely segregated.”

By the time Mike turned 12, the Kinsley family had moved to Birmingham — “Suffield Road, between Maple and Quarton,” Kinsley offers, also remembering the exact number of that house. Soon after, he enrolled at Cranbrook Schools in Bloomfield Hills.

“Cranbrook had a great affect on me,” he says. “I mean, it’s the reason I’m a writer, among other things. I was very lucky. I probably had about the best secondary school education a person could have.”

All made possible, Kinsley asserts, by the school’s rigid curriculum.

“You had to write a thousand words a week on a particular topic,” he says. “That was their traditional rule, and they went in cycles: An autobiographical article, an informal essay, and a formal essay. There were about 10, 15, maybe 20 categories, and you went through them all and then you started again.”

Kinsley entered Harvard University in 1968 and, soon after, rose to the prestigious position of vice president of the school’s daily newspaper, The Harvard Crimson. It was there, he says, that he first began to muse about a venture that would be his alone.

“I think it’s fair to say every journalist thinks of starting a publication of their own, where you don’t have to report to a boss. I guess I was one,” he says.

That sentiment only grew stronger after Kinsley was awarded a Rhodes scholarship and went to England in 1972 to study at Magdalen College in Oxford. “I discovered The Spectator and The New Statesman,” he says, “and I thought, This is what I want to do. I took that pretty seriously.”

Kinsley’s career at The New Republic began auspiciously, when he was only 25, after he returned from Oxford and while he was immersed in his third year as a student at Harvard Law School. He was named managing editor and promptly moved from Cambridge to Washington, D.C., where he got right to work at the magazine and also earned his juris doctor degree by taking evening courses at George Washington University Law School. “The New Republic was the closest thing to (The Spectator and The New Statesman) in this country,” Kinsley says.

So began his peripatetic journey through the better part of the next 20 years as the Beltway’s resident contrarian: He was the author of his magazine’s TRB column, moderator of William F. Buckley’s Firing Line, co-host “from the left” of CNN’s Crossfire, and had several short-lived stints with Harper’s and The Economist, as well as authoring numerous opinion pieces for a variety of newspapers and magazines.

With every word he wrote, Kinsley solidified his reputation as a leading political commentator and a figurehead of the journalistic establishment. But it all came at a cost: The dream he once had of running his own publication seemed distant and elusive.

Reflecting now on how he handled that crushing, life-changing news, Kinsley can chuckle, saying, “there are many good things about it.”

For starters, because he had no idea of the impact the disease would have on his ability to continue living his life as he chose, Kinsley was suddenly in a big rush, in his words, “to have a couple more adventures.”

After hearing that Microsoft was exploring a foray into the content business, Kinsley reached out, through a connection, to then-Executive Vice President Steve Ballmer, another Detroit and Harvard guy. Just three months later, in August 1995, he was making the rounds at Microsoft’s headquarters pitching his idea for a magazine made up of what Kinsley viewed at the time only as two magical words: “on” and “line.”

Which is how his online Slate magazine was hatched in June 1996.

“It was such a frenzy,” Kinsley says. “That was the only reason I got funding from Microsoft. You know, in those days every company that was in any way associated with computers wanted to get into the online thing. They realized they had a tiger by the tail, but I didn’t necessarily realize it. I just knew if you went to a big company or a rich individual and said, ‘I want to start a magazine,’ they’d say, ‘Go away.’ If you said, ‘I want to start an Internet magazine,’ they’d get very excited and they’d give you money.”

For Kinsley, now 64, the experience with Slate was an unforgettable dizzy and exhilarating ride, in large part because Microsoft empowered him with an essential attribute he fondly calls FUA, or “f—youability.”

“Anything interesting or important is going to offend someone,” he says, “and if you’re not in a position to have FUA, then you’re going to run into trouble. You know, journalists are constantly being tested, and Microsoft was the best employer I ever had for that purpose. They never interfered with anything. When people tried to go around us to Bill Gates and Steve Ballmer and put pressure on us not to write something, they just said, ‘Take it to Mike, we’re not interfering.’ And that was great.”

It was mission accomplished for Mike Kinsley. He ran his own magazine his way for six years, until turning over the editorial reigns in 2002 and slipping back into his current role as a columnist (for Vanity Fair) and omnipresent pundit, offering his views from a familiar left-of-center perspective.

Kinsley hasn’t returned to either of his old neighborhoods in years, but he’s optimistic about the place where it all began for him.

“You’re always reading about (the renaissance of Detroit), but somehow it never quite happens. But I sure hope it does,” he says.

As for his Parkinson’s disease? Let’s just say he’s managing it well. His writing is in high demand, and the disease hasn’t significantly affected his productivity or zest for telling a great story. As he affirms, some good things did come out of it. And add this to the very top of the list:

During Kinsley’s first visit to Microsoft headquarters on that summer day 20 years ago, an executive named Patty Stonesifer was one of the many who interviewed him. She clearly made an impression. Ditto for him. They were married six years later.

“It’s all turned out real well,” Kinsley says, with a laugh. “It’s been pretty good, all around. I don’t recommend it — but, in fact, it has turned out well.” db